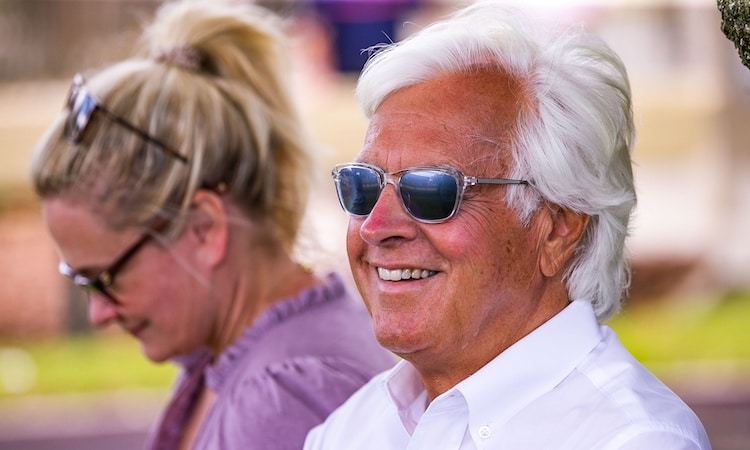 Nearly three months after hearings ceased in the New York Racing Association’s disciplinary process for Bob Baffert, the hearing officer assigned to the case recommended a two-year suspension for the embattled horse trainer in a report issued Wednesday.

In the 50-page report, hearing officer and retired New York State Supreme Court Justice O. Peter Sherwood cited Churchill Downs’ two-year ban of Baffert “based principally on Baffert’s use of prohibited drugs in Medina Spirit during the Kentucky Derby in 2021 and his ‘increasingly extraordinary explanation’ for the presence of banned drugs in horses he entered in races.” In explaining his recommendation, he said, “Baffert has not established grounds for any shorter period of exclusion at the NYRA racetracks.”

Sherwood’s recommendation will be sent to a panel appointed by NYRA President David O’Rourke, which will decide Baffert’s fate. The panel will include three members: John Carusone Jr., an attorney from Saratoga Springs who is on the city’s Saratoga Race Course Local Advisory Board; William Alempijevic, the executive director of the New York Thoroughbred Horsemen’s Association; and Humberto Chavez, chaplain of the New York Race Track Chaplaincy of America.

NYRA suspended Baffert from racing at its tracks (Aqueduct, Belmont Park, and Saratoga) on May 17, after Medina Spirit tested positive for the drug betamethasone following his win in the Kentucky Derby. But a federal judge ruled that NYRA’s suspension was unconstitutional, citing the absence of a hearing and due process, which led NYRA to create procedures for hearings to address such cases.

Baffert has since been suspended for 90 days by the Kentucky Horse Racing Commission, and his horses are now being cared for by other trainers. A NYRA suspension would apply to Aqueduct, Belmont, and Saratoga.

According to NYRA’s rules on hearing procedures, there will now be a seven-day period where “any party may submit exceptions … to the panel,” but that period has been extended to 14 days, according to a NYRA spokesman. After the exception period, the panel will then have 10 days to issue a decision “to adopt, modify, or reject any or all of the hearing officer’s report including, but not limited to, the appropriate disposition of the proceeding,” according to the NYRA hearing rules.

Sherwood’s report was denounced as unfair by one of Baffert’s attorneys, Clark Brewster.

“Despite the fact that Bob has never had a single medication violation in New York, we expected this interim recommendation to the panel, which is not NYRA’s final decision,” Brewster said in a statement. “We will contest this recommendation until we ultimately find a neutral, detached decision-maker that doesn’t rubber stamp the NYRA lawyers’ demands.”

In the report, Sherwood largely shot down the arguments made by Baffert’s legal team concerning the legality of the proceedings. He wrote that NYRA, as a “private corporation,” is “at liberty to deal or reasonably to refrain from dealing with licensed trainers, owners, and jockeys in accordance to its sound business judgement.”

Sherwood also found that NYRA had “met its burden of proof” on charges against Baffert related to “detriment to thoroughbred racing,” “detriment to the health and safety of horses and jockeys,” and harm to NYRA’s “business operations,” even though the Baffert legal team continually pointed out that the trainer has never had a positive drug test for a prohibited substance in New York. It also contended that the New York State Gaming Commission should be the entity issuing sanctions, not NYRA.

The report stated, “Over a 14-month period, racing regulators in three states found that Baffert violated drug regulations in seven different races,” and that “NYRA also proved that each time Baffert was charged with a violation, he provided an implausible excuse and blamed others for conduct that he, as the trainer, was responsible for as a matter of law.” Sherwood continued, “NYRA has reasonably concluded that it will not condone Baffert’s reckless practices, outrageous behavior, and substance violations, each of which compromises the integrity of the sport.”

Agreeing with the case presented by NYRA’s attorneys during the hearings, Sherwood also made the point that “Baffert has engaged in conduct that is detrimental to the best interests of thoroughbred racing, in that he has harmed the reputation and integrity of the sport, as well as public’s perception of the sport’s legitimacy” and that “a failure to suspend Baffert could result in public scandal and ultimately a decrease in spectatorship, loss of revenues to the state and NYRA’s racetracks, and even a decline of thoroughbred racing as a sport.”