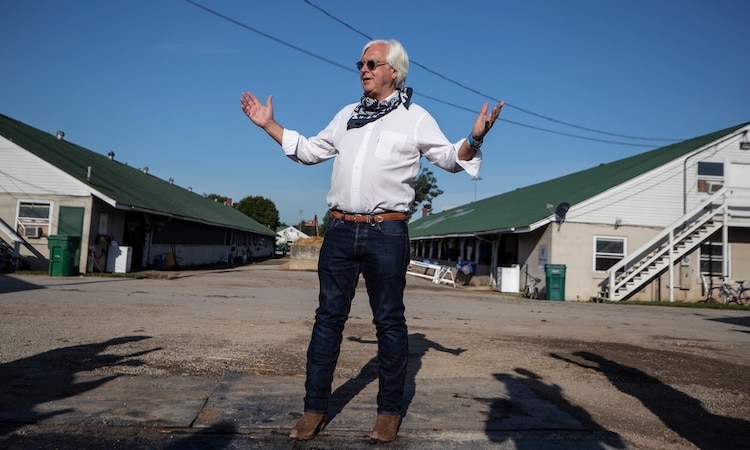 Nearly five months since New York Racing Association disciplinary hearings began for Bob Baffert, to assess whether the horse trainer should be suspended from racing and training at its racetracks, the organization announced Thursday the process has come to a conclusion.

A three-person panel selected by NYRA President and CEO David O’Rourke has decided that Baffert will be suspended for a year “from racing or training activities at NYRA tracks,” according to the announcement. Those horse racing tracks are Saratoga Race Course, Aqueduct Racetrack, and Belmont Park. With time served from a Kentucky Horse Racing Commission suspension handed down in February (which has been reciprocated by other racing jurisdictions, including New York), over Medina Spirit’s drug positive from the 2021 Kentucky Derby, Baffert will be suspended by NYRA through January 25.

“This was an impartial and deliberative process that has resulted in a lengthy suspension of the sport’s most prominent trainer,” O’Rourke said in the announcement. “However, this is not simply about Bob Baffert, or any one individual, but about protecting the integrity of the sport here in New York. Today’s decision advances that goal.”

In April, hearing officer O. Peter Sherwood, who oversaw the process, recommended a two-year suspension for Baffert, as part of his 50-page report on the hearings.

NYRA also provided a 14-page report from the panel in its announcement. The report stated in its conclusion that “the panel concurs with Justice Sherwood that NYRA has sustained its burden of proof by a preponderance of the evidence” and that “the panel agrees with Justice Sherwood that Baffert’s actions ‘harmed the reputation and integrity of the sport, as well as the public’s perception of the sport’s legitimacy.’”

But the report also stated that Sherwood’s classification of Baffert’s infractions as “doping” was “incorrect.”

“In the lexicon of performance enhancing drugs, ‘doping’ refers to the use of substances or methods which allow the athlete, human or equine, to perform beyond the normal level, because it permits the body to build muscle mass or increase endurance,” the report stated. “Such substances or methods are completely banned from use in any sport.

“On the other hand, the drugs for which use Baffert was cited in three jurisdictions are allowed and commonly used but are nevertheless performance enhancing, in the sense that they may suppress injuries and may allow the horse to perform at a normal level in spite of the injury if they are found to be at a level above the allowable threshold.”

The panel also took issue with Sherwood’s statement that “Baffert has engaged in a pattern and practice of unlawful conduct that has no parallel in the modern history of Thoroughbred racing.” The panel’s report stated, “there is scant support in the record for such a statement.”

Clark Brewster, one of Baffert’s attorneys, emphasized the panel’s disagreements with Sherwood’s report, and continued to play a similar tune from the hearings — that NYRA board members are interested in eliminating Baffert as competition.

“From reading the NYRA-selected panel’s decision, it is obvious they tried hard to mitigate and generalize the nonsensical and contradictory ramblings of the Peter Sherwood [report], but still they capitulated to the will of a few NYRA board members who are blindly driven by jealousy and self interest to destroy Bob,” Brewster said.

Baffert’s attorneys also requested a stay of the suspension “pending timely administrative and judicial review,” but that request was denied by the panel, which cited the fact that there is no “administrative appeal permitted” by the NYRA hearing procedures.

NYRA suspended Baffert from racing at its tracks on May 17, 2021, after Medina Spirit tested positive for the drug betamethasone following his win in the Kentucky Derby. But a federal judge ruled that NYRA’s suspension was unconstitutional, citing the absence of a hearing and due process, which led NYRA to create procedures for hearings to address such cases.

Baffert still under suspension in other areas

Baffert is also under a two-year suspension from Churchill Downs Inc., and the Kentucky Horse Racing Commission suspension will run through July 3. There will be an appeal hearing Aug. 22 for the KHRC suspension, although it will have run its course by then. The KHRC suspension required Baffert to move the horses under his care to other trainers at his Santa Anita Park home base.