Oregon hasn't hosted a dog race since 2004. So why is the state so important to the sport? 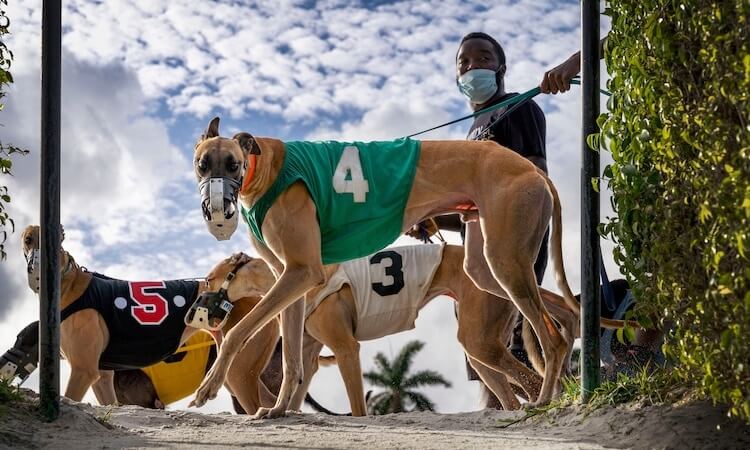 A statement Oregon Senate President Peter Courtney made during an online committee meeting on Feb. 8 created quite a stir. There was no massive outcry about the public hearing of the Senate Judiciary and Ballot Measure 110 Implementation Committee, but more than a few who are paid to pay attention raised their eyebrows.

Courtney had introduced a bill, SB 1504, that would make it illegal for gambling operators in the state to accept wagers on greyhound racing, which is shriveling in the United States. Only nine states allow live dog racing in 2022, but just three run live racetracks (Iowa, Arkansas, and West Virginia), and Iowa and Arkansas are phasing it out.

So what’s the big deal? Because of advantageous tax rates, Oregon represents what is called a “multijurisdictional hub” for advance-deposit wagering (ADW) operators that handle parimutuel betting, which means online wagers processed from around the nation primarily go through the state. The only other state that allows the “multijurisdictional hub” setup is North Dakota. The vast majority of the handle that goes through the Oregon hub, however, is on horse racing.

A fiscal impact statement on Courtney’s bill indicated that the Oregon Racing Commission (ORC) believed it would lose $7 million in revenue from 2023-2025 if the legislation passed, including contributions to the state’s general fund and horse racing industry, because ADWs would move operations out of Oregon.

A shot across the bow at horse racing

“If I had my way, I’d shut down horse racing in a heartbeat, and if I can’t do that, I’d stop you beating and whipping on them,” he said during the Feb. 8 committee meeting. “But I’m not going to get into that. I’ve already had that fight.”

It’s one thing to go after dog racing, a drop in the pail of overall handle that goes through the Oregon hub, but to hint at getting rid of horse racing, which had more than $6 billion in handle go through the hub in 2020? Now you have the industry’s attention.

About a week later, an amendment to the bill was circulated, which made it almost unrecognizable next to the original. The illegality of operators accepting dog racing wagers through the hub, which would have punished violators with a “maximum of five years’ imprisonment” and a $125,000 fine, was gone. What remained in the amended bill were requirements for the ORC to report yearly handle specific to greyhound racing and the amount of state tax revenue generated from such racing, along with the locations of the races that were being offered (ADWs have offered both domestic and international greyhound racing through the Oregon hub).

The amended bill also would ban future licensure of live greyhound racing in the state, but there hasn’t been a licensed dog race in Oregon since 2004, when Multnomah Greyhound Park closed. Another aspect of the bill, which would ban greyhound betting through the Oregon hub from states where wagering on dog racing is illegal, is already part of ORC regulations.

The amended bill passed through the state Senate on Wednesday, by a 27-0 vote, after more than an hour of comments from senators, mostly praising Courtney for his long career in the state legislature. Courtney is not running for reelection and the bill is likely the last he will carry on the Senate floor. The legislation will now be sent to the House of Representatives.

Despite repeated requests for comment over more than two weeks, Courtney did not make himself available to answer US Bets‘ questions on the topic, but he did make comments on the bill when he carried it on the Senate floor.

“The greyhound, which is a magnificent animal by anyone’s description, and one that I believe deserves our attention, because it is my understanding, from credible sources, the treatment of these animals is really very difficult to talk about,” Courtney said. “They’re beaten very badly at times because they’re not winning, they’re doped, there are scratches all through their faces, they are put in cages that they cannot turn around in. I could go on and on. … I don’t want that in my state, I don’t like it, and I’m going to do everything I can to stop it.

“I want to be honest with you. … This bill has not had an easy route to get here.”

Why did the bill change so much?

There is at least some indication as to why the bill was amended from a member of the Oregon House of Representatives who supports it.

“Somebody got nervous,” Rep. David Gomberg told US Bets. “If we eliminate the hubs, we would forgo a lot of money used for track veterinarians, state fairs, things like that.”

When pressed on who “got nervous,” Gomberg declined to share details, but Carey Theil, the executive director of the anti-greyhound racing advocacy group GREY2K USA Worldwide, said, “It was largely because of opposition from companies like Churchill Downs.”

Churchill Downs Inc., through a spokesperson, declined to comment on the Oregon bill. The other major ADWs — XpressBet (operated by The Stronach Group, or 1/ST), TVG (FanDuel Group), and NYRA Bets (New York Racing Association) — also declined requests for comment or did not respond. A spokesman for NYRA said it does not offer dog racing through its betting platform, so no comment was necessary. US Off-Track did not respond to requests for comment.

Although SB 1504 changed substantially since its inception, Theil is still happy with the progress its current form represents, and he is particularly pleased with the aspect of limiting greyhound wagering through the Oregon hub to bettors in states where wagering on greyhound racing is legal.

Although ORC regulations already have that rule, Theil said investigations by GREY2K, which featured volunteers setting up accounts in states where greyhound betting is allegedly not permitted, found that the commission “hasn’t been enforcing it.”

“Volunteers set up test accounts and we proved violations for all these companies,” Theil said. “We submitted that to the Oregon attorney general a couple months ago, and that has been pending. Enforcing that [aspect] would be a significant development.”

In a letter to Oregon Attorney General Ellen Rosenblum and Oregon Secretary of State Shemia Fagan in September, GREY2K President Christine Dorchak alleged that multiple ADWs (TVG, AmWest, TwinSpires, US Off-Track, BetPTC) allowed the volunteers to register for dog wagering accounts in states where it was illegal and that the investigation “revealed a patchwork of inconsistent policies and key violations.” Operators approved accounts in some states but denied them in others, according to Dorchak’s letter.

Dorchak also asked for international dog races to be suspended from wagering, adding that “GREY2K USA is not seeking punishment as much as enforcement of the ORC rule as written.”

ORC Executive Director Jack McGrail disputes GREY2K’s claims on the basis that just because live greyhound racing might be outlawed in a state, it doesn’t necessarily mean wagering on greyhound racing is explicitly illegal.

“This is where people who are not in the industry don’t understand,” McGrail said. “We have these states where parimutuel wagering is lawful, and there’s nothing about greyhound racing [in laws, rules, or regulations]. Does that make it illegal? Does that make it legal? Or is that up to the individual company to make their own assessment and back it up?”

On the topic of the legality of wagering on greyhounds in specific states, Gomberg’s office produced a response from the Oregon legislative counsel, which stated, “Our research indicates that wagering on live greyhound racing is legal only in the states … specified (Alabama, Arkansas, Connecticut, Kansas, Iowa, Oregon, Texas, West Virginia, and Wisconsin), plus Rhode Island, where greyhound racing is legal in certain towns.”

McGrail did not agree with that assessment, and pointed to the fact that, while live greyhound racing is banned in Massachusetts, Raynham Park still offers simulcast wagering on dog racing from out-of-state tracks. A representative from Raynham Park confirmed that the facility takes simulcasted greyhound wagers. According to the Oregon legislative counsel, Massachusetts is not on the list of states where wagering on dog racing is legal.

Dorchak’s letter cites “Question 3 of 2008,” a Massachusetts ballot initiative, but the text of that measure does not explicitly ban wagering on dog racing conducted outside of the state. The measure, which was approved by Massachusetts voters, sought to “prohibit any dog racing or racing meeting in Massachusetts where any form of betting or wagering on the speed or ability of dogs occurs.”

Connie Winn, ORC’s supervisor of account wagering hubs, said she looked into the allegations brought by GREY2K and “didn’t find any findings that were legitimate.” She said the accounts opened were for parimutuel purposes generally, not accounts specific to greyhound wagering.

Was horse racing really at risk?

Although Courtney’s comments about horse racing might have inspired ADW companies to get involved and oppose the bill as it was originally written, Gomberg said there is no threat to the horse racing industry from the Oregon Legislature.

“In my opposition to facilitating dog racing, it is not my goal or desire to impact horse racing. I’m being told that will be the end result, which has me scratching my head a little bit.”

Gomberg said SB 1504 could set the table for future bills to limit greyhound betting through the Oregon hub. But ever since voters in Florida overwhelmingly supported a ballot initiative (nearly 70% and more than 5.4 million “yes” votes) to ban dog racing in 2018, ballot measures have been a boogeyman to the animal racing industry.

Outside of the major thoroughbred racing days, like the Triple Crown races, animal racing operates in something of a blind spot for the general American public. Although many voters may be oblivious to racing in their state, the fear is the public would vote to ban animal racing if presented with a yes-or-no referendum on it, particularly in blue states — similar to what occurred in Florida, a purple state politically.

Theil and GREY2K were part of a coalition of animal rights groups to get that measure on the ballot in Florida, and when the organization sent letters to ADW companies in September, it cited a survey that found “74% of likely Oregon voters will support” a measure to end betting on greyhound racing through the Oregon hub, and asked the companies for support “to show leadership on the issue of dog racing.” Theil said there was no response to the letters.

“The legislative process is designed to create compromises, and we saw ADWs come in, in a significant way, and oppose the bill,” Theil said. “I think we could have passed the bill anyway, despite their objections, but the revised bill, from our perspective, is still very significant.

“[The ADWs are] not our enemies. We have no major stake in gambling, horse racing, or all that stuff. I’m here to protect dogs. But it should not be lost on the ADW companies that, when we say we’re looking into a ballot measure in Oregon, it’s not an idle threat. We know how to run these campaigns.”