‘CODA,’ ‘The Power of the Dog’ Have Sportsbooks Tightening Best Picture Odds 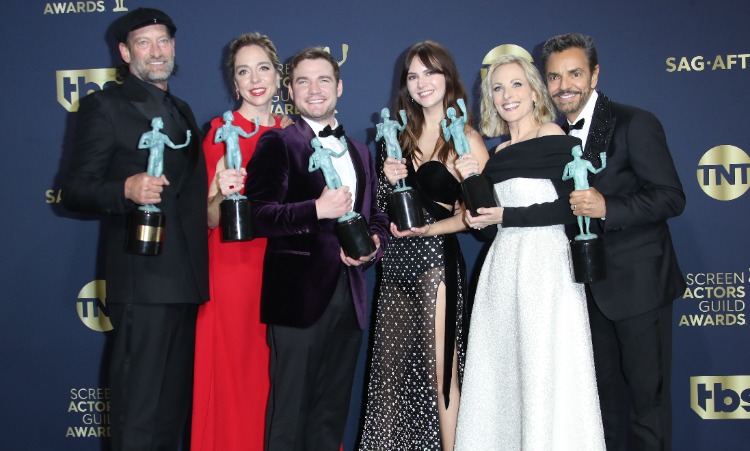 All of a sudden, we have a barnburner of a race for Best Picture at the Oscars, as The Power of the Dog went from shoo-in to barely the front-runner quicker than you can say — or, in this case, sign — CODA.

After winning the best film honors at the Producers Guild Awards last Saturday night, the AppleTV feel-good movie about a deaf family, their fishing business, and their one daughter who can hear and is trying to become a singer has catapulted itself into “holy cow, we may have an upset brewing” territory.

If #CODA truly closes the deal and wins the #Oscar for Best Picture, this is going to be an “upset” for the AGES. Someone could literally write a whole book about the ups and downs of this season. All hail the underdog 🤟🏻 pic.twitter.com/tge34pu6SL

Rationale for believing the upset will happen? Only three times since 2009 — the year both the PGAs and the Oscars went to a preferential ballot system for Best Picture — has the PGA winner not won the Academy Award.

And the sportsbooks, which are permitted to take Academy Awards bets in New Jersey, Indiana, Michigan, and Louisiana, have taken notice.

Meanwhile, The Power of the Dog, which won Best Film at the BAFTAs two weeks ago, went from a high of -250 down to -167 at PointsBet, and all the way down to -125 on DraftKings.

At this point, it certainly looks like a two-horse race for Best Picture, although Belfast is still hanging around, with odds ranging from +900 at Caesars to +1400 at BetRivers.

The darkest horse in the Best Picture category has to be Dune, at +5000 on BetRivers. It hasn’t won the top award at any other awards ceremonies, but it’s expected to clean up in all the technical categories it’s nominated for. Stranger things have happened.

As for the other big awards, well, the drama isn’t there for at least three of them.

Will Smith is the heavy favorite to win Best Actor for his titular role in King Richard at -600 on FanDuel, with his stiffest competition coming from The Power of the Dog’s Benedict Cumberbatch, who is at +550 at FanDuel.

Best Supporting Actress is a foregone conclusion, as West Side Story breakout star Ariana DeBose is at -1600 at DraftKings.

Best Supporting Actor has flipped in recent weeks. Kodi Smit-McPhee was the early favorite for his work in The Power of the Dog, but CODA’s Troy Kotsur has won every supporting actor nod across all the award presentations since Smit-McPhee beat him out for the Golden Globe back on Jan. 9. As a result, Kotsur is sitting at -334 at PointsBet. Smit-McPhee can be had for as high as +300 on BetRivers.

The lone top billed category that has question marks is Best Actress, where Jessica Chastain, for her role in The Eyes of Tammy Faye, went from +500 longshot to +130 favorite after her win at the Screen Actors Guild Awards last month. Today, she’s down as low as -175 on DraftKings. But …

The “but” is none of the Best Actress nominees were nominated for the BAFTAs, and the other award shows since then don’t give out hardware to actors. In short: Chastain is the favorite based almost solely on the SAG award. And that means this race might be more wide open that anyone thinks. The best odds for each nominee: Nicole Kidman, +330 at DraftKings; Olivia Colman, +500 at PointsBet; Kristen Stewart, +650 at BetRivers; and Penelope Cruz, +2000 at DraftKings.

Me after sneaking into the oscars and stealing the Best Actress award to give it to Kristen Stewart pic.twitter.com/J6l4CRQYfN

Filling out the ballot

Best Documentary has a favorite: Summer of Soul (or … When the Revolution Could Not Be Televised) at -300 at PointsBet. But there is the very real potential of a surprise here, as Stanley Nelson took home the director’s prize at the Directors Guild of America awards for his film, Attica, which is as high as +1600 at FanDuel. Flee is also a contender, with odds as long as +260 on FanDuel.

How about Best Animated Feature? Encanto is the heavy favorite, at -1430 at BetRivers (and down to -800 at DraftKings), but The Mitchells vs. The Machines, which took home the Annie (the Los Angeles branch of the International Animated Film Association) award, is the longshot challenger, with odds as high as +800 on FanDuel.