“It was a walk-before-you-sprint approach," said a representative of PointsBet after the golf BetCast debut 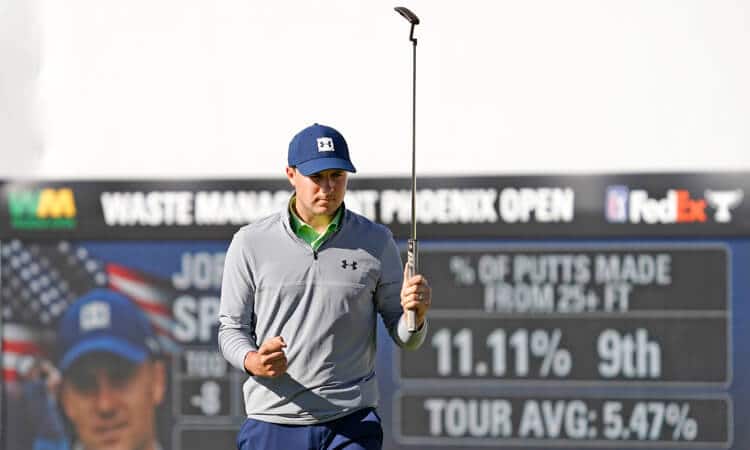 The PGA Tour’s recent embrace of gambling turned into a bear hug during the Waste Management Phoenix Open that concluded just in time for Sunday’s NFL kickoff between Tampa Bay and Kansas City.

It was fitting the PGA Tour, NBC Sports, and sportsbook PointsBet chose Super Bowl weekend and the stadium setting on the 16th hole at TPC Scottsdale for the first-ever telecast devoted exclusively to golf betting.

For anyone who paid $4.99 a month to subscribe to the premium service of NBC’s streaming channel Peacock, they got to watch what can best be described as three guys betting golf. Called Edge BetCast, it was streamed for 2½ hours a day over four days of the tournament.

The trio had good chemistry as they laughed with each other and critiqued picks just like buddies sitting in a living room watching golf. They were given 500 points for pre-tourney bets (like matchups and top 5s and 10s, for example), and 1,000 points to bet within the tourney. It was clear they were not experienced golf bettors. They struggled on Thursday and got better as the week went on, but only Savaricas finished with more points than the 1,500 with which he started — and he finished in the black by a mere 11 points.

The telecast was more of a tutorial on how to bet golf rather than a template of what any hardcore golf bettor would want in the future whenever the concept is brought back. The main trio, and even Greenstein, were learning about the nuances of golf betting along with those in the audience who are new to in-play golf future odds long offered in Europe and Australia — where PointsBet is based.

The broadcast was mostly a split screen between the trio and their featured group on which they’re making most of their simulated bets. To keep tabs on the whole tournament required watching the standard broadcast on the television with the sound off and the Edge BetCast on the computer.

The best moments came on Saturday — moving day in golf — when there was more of a focus on volatile futures odds and when Jordan Spieth, who started the tourney at 150/1, made a run up the leaderboard with a 61 to end the day at 5/2.

The PGA Tour has fully embraced golf betting after previously keeping its distance until a U.S. Supreme Court ruling in May 2018 paved the way for the legalization of sports betting nationwide. The Tour has deals with not only PointsBet but also DraftKings, FanDuel, and BetMGM.

During the CJ Cup in Las Vegas in October, NBC’s Golf Channel and BetMGM teamed up to show live golf betting odds throughout its regular broadcast of the tourney.

NBC debuted its BetCast concept in April 2019 on NBC Sports Philadelphia for a 76ers regular-season game and a playoff game.

“We are aiming to appeal to a broader audience, using analytical storytelling to educate and entertain,” O’Rorke told US Bets. “We expect that there will be potential for BetCast presentations across other sports.”

Alan Robison, NBC Golf supervising producer and producer of the weekend’s Edge BetCast, said the goal was to entertain the audience while educating viewers new to sports betting. It gave hardcore bettors a chance “to peek behind the curtain from a sportsbook point of view.”

Golf bettors can expect more in the future.

Elisa Richardson, head of public relations and communications for BetMGM, said it’s been great to see the PGA Tour embrace sports betting as innovatively as it has.

“We’ll continue to work closely with the PGA Tour on innovative opportunities to further integrate BetMGM into their future plans for golf betting programming,” Richardson said. “They’ve been a wonderful partner thus far, and we look forward to continuing our relationship.”

Patrick Eichner, director of communications for PointsBet, said there was “a phenomenal response to the broadcast from people within the industry who live and breathe sports betting and see the upside and potential” and are excited for the future. PointsBet has signed an exclusive deal with NBC Sports, which has an equity stake in the sportsbook.

“This was a solid test run on the fertile ground of the sport of golf, and golf is built for that wagertainment like this,” Eichner said. “It was a walk-before-you-sprint approach. We understand this is our first crack at it, and there’s room to improve and innovate further and get better for the future. Maybe, five to ten years down the road this is how you consume golf, or it remains a second-screen experience. This won’t be the last BetCast from PointsBet, NBC, or elsewhere.”

NBC adapting to fit what the golf gambler wants

Matthew Wiley, who hosts a podcast called Golflandia and publishes past performance sheets on golf tourneys around the world through Green Square Golf, applauded the broadcast for its recognition of what he and others have known for years: that fantasy golf and betting drives television ratings for the sport.

“I think the PGA Tour’s embrace of betting is great because it means they are adapting to the viewer who is watching all four rounds,” Wiley said. “NBC is taking the lead, and this is cutting edge. It’s in its infancy and will get better.”

Wiley said while he appreciated the attempts at this first broadcast, hardcore bettors and fantasy players are looking for more than three guys simulating betting golf. But he added it’s likely to evolve over time to appeal to those people rather than someone new to golf gambling, he said.

“At least it’s different, and they’re giving it a shot,” Wiley said. “They’re trying to get people interested in it, but either you’re born a gambler or you’re not.”

Burkowski, who served as the host and admits he doesn’t bet on golf but loves sports betting, said the first broadcast was a progression from a crawl, to a walk, to a jog, to a run, and finally to a sprint. They were trying to have a balance between the casual observer and diehard bettor, and it was fun to be a part of the broadcast and concept that will appeal to more people in the future. He opened the broadcast Thursday by saying “the future is now” for the PGA Tour.

“We didn’t dip our toes in, but we were going right up to our waist and seeing how cold the water was,” Burkowski told US Bets. “I’m proud of what we did and were able to put out there. We’re scratching at the surface. I’m hopeful bigger and better things are ahead. We at NBC Sports want to be on the forefront and ahead of the curve as the consumption of sports changes.”