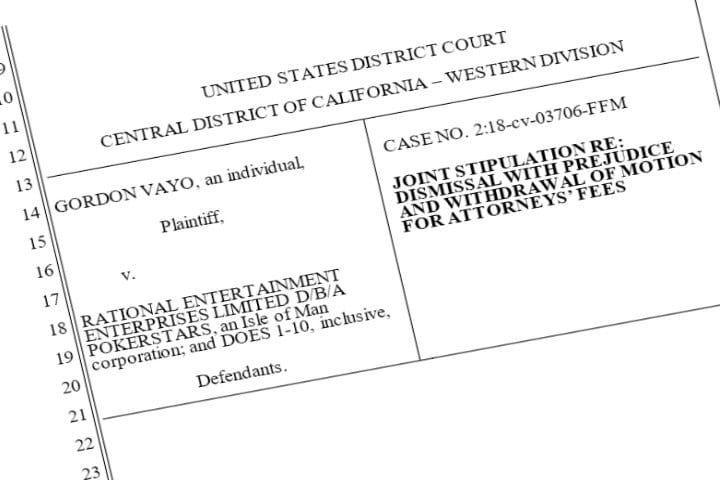 PokerStars and Gordon Vayo have moved one step closer to being done with one another, months after a contentious lawsuit was filed by the latter in May.

According to a Dec. 4 court filing obtained by US Bets, PokerStars has withdrawn its motion to collect about $280,000 worth of legal work done to defend itself against Vayo’s lawsuit.

From the joint filing: The pending Motion for Attorneys’ Fees and Costs by Rational Entertainment Enterprises Limited d/b/a PokerStars is hereby withdrawn without prejudice.

Vayo voluntarily, and rather abruptly, dismissed his lawsuit in mid-October. Filings from PokerStars less than a month later provided an explanation for his action.

Vayo, who finished second in the 2016 World Series of Poker main event, was originally seeking to recover nearly $700,000 that he had won in a May 2017 online poker tournament.

The 30-year-old accused the poker giant of illegally confiscating his funds, with PokerStars countering that Vayo had illegally played from California. Vayo claimed he was in Canada, but explosive court filings last month included allegations that Vayo had forged documents and records in an attempt to falsely show he was in Canada. PokerStars said that its internal investigation found that he used a Canadian mobile internet provider to “spoof a Canadian IP address.”

Earlier legal representation for Vayo had said in court filings that it was all a “witch hunt.”

According to court filings from last month, a hearing was slated for Dec. 18 in front of Judge Frederick Mumm of the U.S. District Court for the Central District of California.

It appears that the hearing, which was for PokerStars’ motion for the attorneys’ fees, is now off.

It’s unclear if any further legal trouble will stem from the allegedly forged documents that Vayo submitted, but that potential criminal exposure for the poker pro is out of the online poker giant’s hands.

PokerStars has not commented on the case except through its legal team in court filings.

Why would PokerStars not seek the attorneys’ fees?

It might appear as goodwill on behalf of PokerStars, but it probably benefits the company to move on.

The most obvious explanation for withdrawing the motion for the fees would be to put the dispute to rest once and for all. PokerStars, which operates in New Jersey and was recently approved for online poker in Pennsylvania, probably isn’t interested in continuing the very public court battle with Vayo, even though it was ultimately in the right.

Collecting the money, had Judge Mumm ordered Vayo to fork over about $280,000, could have also been a lengthy fight, providing additional fodder for media coverage.

The Dec. 4 court filing stated that Vayo’s litigation has been dismissed with prejudice, which officially bars the poker pro from further litigation on the matter. Vayo, through his attorney, at one point falsely claimed that PokerStars was turning a “blind eye” to illegal online poker play from within the U.S.

The mudslinging became so great earlier this year that PokerStars’ legal team warned that it would go after Vayo if he published “false or defamatory remarks” about the company.

Vayo has only cashed in five live poker tournaments since the ill-fated online poker tournament in May 2017, so moving on from the lawsuit at this stage in the game is probably a welcomed development.