Favored Epicenter, even in defeat, may have run the best race in Triple Crown's first leg 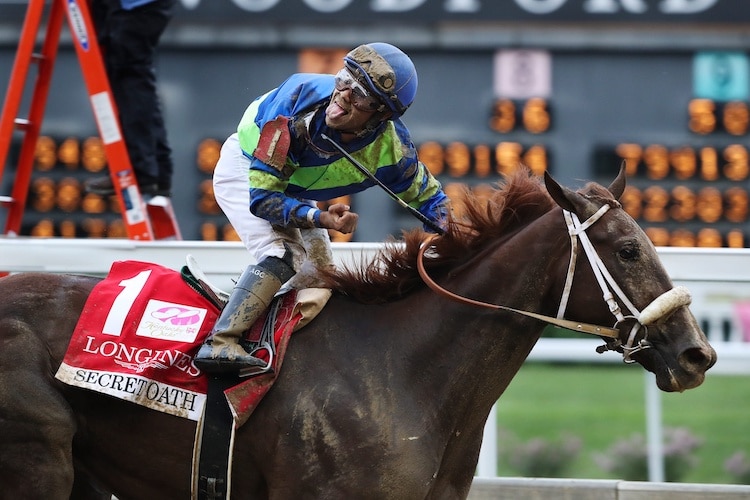 Try to forget that the Kentucky Derby winner is out of the Preakness Stakes, and the race still has ample intrigue in the horse racing world.

And Rich Strike wasn’t going to win the middle jewel of the Triple Crown in Baltimore, anyway.

The odds of an aberrant hot pace and ensuing meltdown, like the one that enabled the most shocking upset in modern Derby history, are slim for the 1 3/16-mile Preakness at Pimlico on Saturday. And a more reasonable pace may lean the race toward the 6/5 morning-line favorite, Epicenter, who looked like he had the Derby won until Rich Strike’s lunge in the final sixteenth at Churchill Downs.

Although Preakness Stakes betting will never beat the Kentucky Derby in pomp and circumstance, it will always be special in its own way. So get over it — the 2022 edition does not lack punch.

Another filly in the Preakness

Epicenter — trained by Steve Asmussen, North America’s all-time leader in wins — will go against the winner of the Kentucky Oaks, Secret Oath, who has joined the Preakness’ rich tradition of fillies racing against the boys (55 have done it), which includes 2020 winner Swiss Skydiver and all-time great Rachel Alexandra (2009).

Secret Oath, trained by the octogenarian D. Wayne Lukas, already tried to beat the colts once this year in the Arkansas Derby. She made her move at Oaklawn Park, but tired late to finish third after a subpar ride from jockey Luis Contreras. A rider switch to Luis Saez for the Kentucky Oaks did the trick, and her eye-catching surge in the turn inspired her connections to take a run at the Preakness.

And why try the boys again?

“We’ll step outside of the box within reason,” said Secret Oath’s co-owner and breeder, Rob Mitchell. “I really felt like we should have won the Arkansas Derby, but we didn’t.”

Who ran the best race in the Derby?

An argument can be made that the best horse in the Kentucky Derby wasn’t the winner and was instead Epicenter.

Although his journey was without issue in a conventional sense — a stalking trip with first run at the leaders is usually ideal — Epicenter moved fairly early into hot pace, would not let his only apparent and logical challenger (Zandon) by, and almost surely did not benefit as much from the Derby meltdown as Rich Strike. Only one horse near the front early in the Derby finished in the top 10, and that was Zozos, who finished 10th, 15 3/4 lengths behind Rich Strike.

“I can’t believe it, after Epicenter’s effort,” said Asmussen, who is still seeking his first Derby win after the May 7 race. “And, the scenario in which I went 0 for 24 — you couldn’t make up. I got beat by the horse that just got in [off the also-eligible list].”

Also in the Preakness from the Derby field are fourth-place finisher Simplification and 14th-place runner Happy Jack, but the rest are the fabled “new shooters.” And the most highly regarded from that group, 7/2 second choice on the morning line Early Voting, is a colt that could have run in the Derby, but his trainer opted out.

Because of his relative inexperience and pattern of ample spacing between starts, the frontrunning Early Voting was held out of the Derby in favor of the Preakness by trainer Chad Brown. He last competed in the April 9 Wood Memorial at Aqueduct, where he lost by a neck to eventual fifth-place Derby finisher Mo Donegal.

“Part of my job is managing risk for horses and clients, and you’re not always right, but you have to manage risk and the long run,” Brown told the Daily Racing Form on May 1. “I think in this case, based on my experience, the more logical, safer approach is to give [Early Voting] six weeks in between starts, only inch him out another sixteenth of a mile in distance after getting run down going shorter, and put him in a starting gate with less horses in it.”

Brown and owner Klaravich Stables won the Preakness with Cloud Computing on a similar race pattern in 2017 after he finished third in the Wood.

Other fresh faces in the Preakness field include Fenwick, who last finished 11th in the Blue Grass Stakes; Armagnac, a May 8 allowance winner at Santa Anita who came in a non-competitive fourth in the Santa Anita Derby; Skippylongstocking, the third-place finisher from the Wood; and Creative Minister, who wowed the Churchill Downs crowd on the Kentucky Derby undercard.