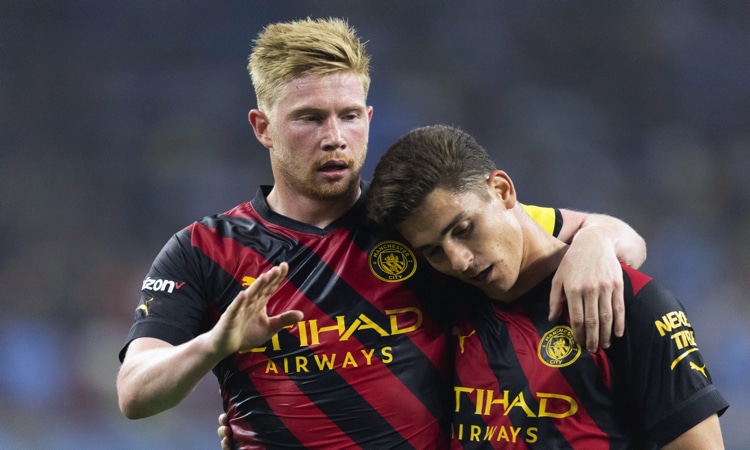 Two Premier League teams have been the class of England in recent seasons, be it a normal season or pandemic-affected: Manchester City and Liverpool.

The “noisy neighbours,” as Sir Alex Ferguson once sarcastically labeled the Citizens, have turned Manchester from red to blue with four Premier League titles in the last five seasons, leaving a direction-less United in their wake.

Liverpool, which has almost always enjoyed the upper hand domestically at the expense of Merseyside rival Everton, captured a long-sought Premier League title in 2020 after claiming the one thing that has eluded City during its run of excellence — a sixth European title back in 2019.

The Premier League kicks off what will be another disjointed season Friday when Crystal Palace hosts Arsenal. This time, the disruption comes from the World Cup being played in Qatar during November and December. It interrupts domestic play at an unprecedented level, as practically every team in the top flight will see at least one player represent his country for upwards of a month.

Thus, the early part of the season will be a mad dash to collect points before the international recess, a task made more difficult for the league’s elite as they also navigate Champions League and Europa League group play. After the World Cup, the season resumes with the chaos of Boxing Day and New Year’s week fixtures, leaving gaffers to manage player workload — a task made slightly easier with the league again allowing five substitutes.

Premier League drama has few peers in international soccer, though the stratification of the haves and have-nots continues to grow more defined, developing layers even within the top six. Through it all, the one question that looms largest over the season when it comes to sports wagering remains the same as it has been for the last six years: Can anyone topple Manchester City?

What percentage of punters have backed the same selection as you? pic.twitter.com/MvgCKeGIgQ

Oddsmakers have watched City’s retooling in the offseason with plenty of interest. It started with the acquisition of 21-year-old forward Erling Haaland from Borussia Dortmund for a relatively cheap $66 million and included solidifying the central midfield by prying Kalvin Phillips from Leeds United for another $53 million.

To balance the books and further antagonize the rest of the league, City actually turned a profit in the transfer market this summer by off-loading Raheem Sterling to Chelsea and both Gabriel Jesus and Oleksandr Zinchenko to Arsenal for a combined $158 million.

Though all of England seemingly went apoplectic when Haaland was pedestrian and missed a sitter in Manchester City’s 3-1 loss to Liverpool in the Community Shield last weekend, the Norway international is expected to be the difference-marker on Pep Guardiola’s team to help City become the first side to “three-peat” in the top flight since Manchester United from 2007-09.

The best odds on the Citizens to win the title can be found on the Kambi platform, where BetRivers and Barstool Sportsbook are both offering -134. BetMGM is close behind at -140, while PointsBet is the only other place offering -150 or better among major sportsbooks.

Haaland, a towering presence in the final third at 6-foot-4, is the target striker Guardiola has long sought to break defenses — recall the failed pursuit of Tottenham Hotspur striker Harry Kane last year. Haaland had 70 goals in all competitions for Borussia Dortmund the last two seasons and has bagged 16 in his last 14 international appearances for Norway. He is the prohibitive favorite to win the Golden Boot as the EPL’s top scorer, with FanDuel‘s +390 far and away the best offering for him in this category.

Sticking with City, BetRivers and Barstool are both offering Kevin DeBruyne at +400 for most assists, and if the Belgian stays healthy — a notable challenge as he has missed 21 league matches the last two seasons — that is a play definitely worth considering. DeBruyne has had four seasons with 12 or more assists for City, including a record-tying 21 in 2019-20, and is expected to be the primary distributor for the offense.

Give me that shield! 😂♥️ pic.twitter.com/PSwjxaEQQD

Liverpool has been the lone team able to go toe-to-toe with Manchester City over the past three seasons, as its 357 points accrued the last four seasons is one less than City in that span. Like Guardiola, Liverpool boss Jurgen Klopp has made some alterations to his attack, most notably bringing in Darwin Nunez to replace the departed Sadio Mane.

Nunez, who cost Liverpool a club-record $103.1 million in the transfer market, burst onto the scene last season with 32 goals in 38 matches across all competitions for Portuguese side Benfica and hit the ground running for the Merseysiders with a goal off the bench in the Community Shield last weekend.

How he slots in the rotation of forwards that includes holdovers Mo Salah, Roberto Firmino, and Diogo Jota will go a long way in determining if Liverpool can topple City for a second time in four seasons. Oddsmakers see the Reds as the primary — and perhaps lone — obstacle to a City “three-peat,” with +250 the best play at multiple books including DraftKings, BetMGM, and WynnBET.

Salah is a clear second option to Haaland for the Golden Boot, with FanDuel’s +470 edging out the +450 most commonly offered. Nunez’s range is slightly larger, with BetMGM most bullish on the Uruguay international at +850 and both DraftKings and FanDuel providing a +1400 listing.

Other title options and markets

While the three main London-based teams — Tottenham, Chelsea, and Arsenal — all appear to be improved to varying degrees, Spurs looks to be the only side truly capable of turning the Premier League into a three-team race this season. The Lilywhites still have a world-class striker in Kane, a competent running partner in South Korea star Heung-Min Son, a decorated warhorse in newcomer Ivan Perisic, and a Premier League title-winning coach in Antonio Conte.

It was Conte who gave Guardiola a rude welcome to the Premier League in 2016-17 when he revamped Chelsea early in the season to a 3-4-3 formation that no one else could solve. And after a dreadful run of managerial selections by Spurs Chairman Daniel Levy following the departure of Mauricio Pochettino in 2019, Conte looks to be the right man at the right moment after dragging Spurs to the fourth and final Champions League spot following his arrival last November.

Still, his task is Herculean in scope, and oddsmakers know it. The shortest odds for Spurs are +1000 at PointsBet, the most common listing is +1200 at DraftKings, BetMGM, and WynnBET, and FanDuel has the longest offering at +1600. Kane is still a viable Golden Boot option, with the England talisman available from +450 at DraftKings to +600 at Caesars Sportsbook.

On the flip side of the table, the battle for relegation could wind up being the more entertaining viewing if City and Liverpool again separate themselves from the pack early. Of the three promoted sides, Bournemouth is in the most danger of having a one-season stay in the top flight as it is the only side tipped to return to the Championship. BetMGM is most bullish on this outcome at -225, with DraftKings and PointsBet close at -200. On the other side of this play, FanDuel is offering +145 for the Cherries to avoid relegation.

Among non-promoted teams, Leeds United appears to be the oddsmakers’ choice as the team most likely to finish in the bottom three, with DraftKings offering +225 followed by PointsBet and BetMGM at +200. Everton, which has never been relegated in the Premier League era and has not been out of the top flight since gaining promotion in 1955, offers some intrigue as a +333 option at BetMGM and +300 listing for both DraftKings and PointsBet.