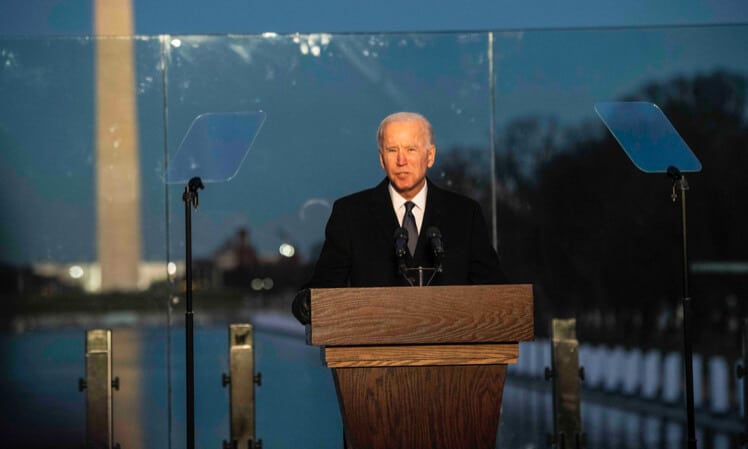 Last Sunday’s playoff game between the Chiefs and Browns was a touch more competitive than some fans expected and provided nervous moments for fans on both sides down the stretch. In the end, the score was close and the upset was just one or two key plays away from materializing. But the Chiefs prevailed.

How sweet would it be if, a few days later, you could still find people willing to bet you real money on the game, taking the position that the Browns actually won?

That’s effectively the situation David Tuchman found himself in after the Nov. 3 presidential election.

Tuchman, a veteran member of the gambling media best known for his play-by-play work on World Series of Poker livestreams, will not reveal the exact amount he stands to win when Biden takes the oath of office. He indicated last week on the Gambling Mad with Norman Chad podcast, however, that he and his wife “would have to delay our retirement by about four or five years” if somehow Trump begins a second term.

He did tell US Bets exactly how many Trump bettors took his action.

“Nine separate people have booked bets with me,” Tuchman said, counting the entries on his spreadsheet. “I have more than nine bets, though. Several of them bet once and then came back again. Repeat customers.”

The regulated sportsbooks in the United States, from Las Vegas to Atlantic City and all mobile devices in between, cannot legally take real-money bets on any political election. So Tuchman made private deals. It started with a simple tweet on Nov. 8:

For those holding out hope that Trump can still win, I am offering 16-1 odds. DM to book.

Tuchman had initially talked with a close friend and proposed offering 50/1 odds to reel in opponents, only to be convinced by his friend that he didn’t need to go that high. So he started at 16/1 — risking $16 for every dollar his Trump-trusting opponent would be risking.

He got a couple of bites, so he dropped the price. To his amazement, he was able to get takers as low as 6/1. The odds crept back up, and Tuchman kept finding takers, and he offered better odds to keep adding names to his spreadsheet. Even as Trump’s lawsuit losses piled up, the action didn’t stop. A day after the Jan. 6 attack on the Capitol, which delayed but couldn’t stop Congress’ formal counting of the electoral votes, it still wasn’t over.

“Early on I played the troll game, because I didn’t think I’d get any action otherwise, so I was like, ‘Wow, all these lawsuits, maybe Trump’s gonna win,’” Tuchman explained. “I thought, great, if I can make a hundred bucks out of this from some sucker, awesome.

“Here’s the thing: I pride myself on being open-minded. Politically, I’m moderate. I’ve voted Republican in my life, and I’ve voted Democrat in my life. I really try to respect people having different opinions. Having different opinions is fine. What scared me about this is we were having people live in different realities. So when the days and weeks went by and we started getting into December, especially after Dec. 14, and people were still betting on Trump, I dove right inside that rabbit hole because I wanted to know why.”

Tuchman exposed himself to many of the videos and articles — or, as he and many others have termed it, the “propaganda” — from which some Trump backers were taking their direction.

“After Dec. 14, I got to the point where I actually started asking people I was betting against, ‘Why are you betting?’ I wasn’t playing the troll game to get action anymore. I wasn’t playing the salesman. I told them, ‘You’re throwing your money away. Stop.’ I said that, and they bet me anyway.”

Tuchman wisely brought in a lawyer to word his betting agreements for him.

And with most of his bets, Tuchman isn’t taking his chances on the opposing bettor refusing to pay up.

“I’ve made people post,” he said. “I’m risking a lot of money for what is a relatively small amount of money. So I made sure that people posted. There are one or two people who did not post, but they’re very prominent in the poker and gambling worlds and would never soil their good name by not paying — and it’s not that much money for them.”

Tuchman made his share of pre-election wagers as well. He bet on Biden at various stages early in 2020 and even hedged a bit with some bets on Trump as the odds moved and the incumbent became a substantial underdog, ensuring that he’d come out ahead financially either way. Some of those bets were with offshore books, but most were privately negotiated.

But that action isn’t terribly interesting. Those are run-of-the-mill wagers. They’re akin to bets placed before the Chiefs-Browns game.

The story here is the bets made after the final score went up on the scoreboard.

Yes, Tuchman that recently booked another bet on Trump, agreeing to his steepest price yet, 35/1.

That has to be the last one, right? Right?

You would think so. But keep an eye on Tuchman’s Twitter feed the next few days. After all, who says the betting has to stop just because the score is final, the league has confirmed it, the trophy has been hoisted, and all of the players have headed home for the offseason?