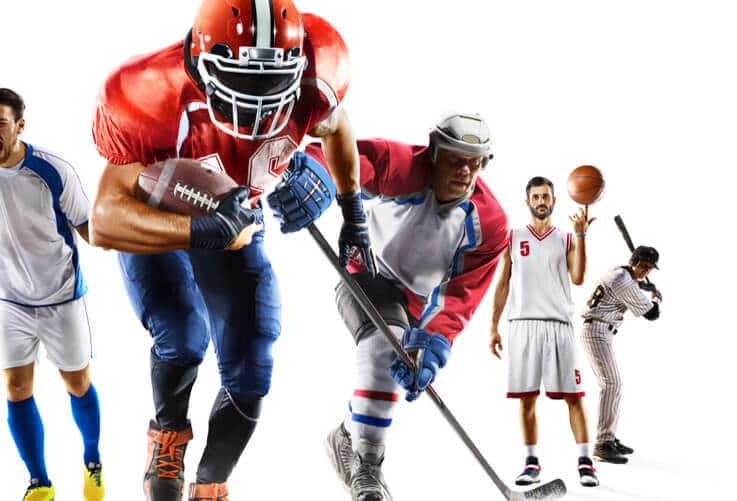 There was more news this week — as it seems there is every week these days — about gaming operators working out partnerships with pro sports leagues.

But sometimes almost forgotten in all this talk about sports betting deals are the athletes themselves, a situation partly remedied by an engaging 45-minute panel at the ICE Sports Betting USA summit in Manhattan on Wednesday.

“We feel like we should be at the [negotiating] table,” said Corey Schwab, the VP of Business and Legal Affairs for the NFL Players Association.

Steve Fehr, legal counsel for the NHL Players Association, said, “for many in the gaming industry, they say, ‘C’mon, [sports betting] will be great for you, with increased popularity of the sport and more people buying tickets so that’s how you get your share.’ I understand that, but it’s kind of hard to accept the notion that an industry should expand exponentially and generate all sorts of revenue based on the performances of the players, and the players should not receive anything out of that.”

“We feel we should be compensated, whether you call it an integrity fee, a royalty fee, whatever,” David Foster, deputy general counsel to the NBA Players Association, said. “It’s more of a fairness argument. This is an industry where labor creates a product, a third party now is going to benefit exponentially, and states — government — get to pick and choose who gets to be the [sports betting] licensee.

“The one group that 100% will not be able to [participate] are the players,” he added. “They won’t be able to open up their own betting shop. We want to have a stake in this new revenue stream.”

If you think you are hearing the drumbeats of some civil wars ahead, well, we’re not there yet. Schwab, Fehr, and Foster all acknowledged that just six months beyond the U.S. Supreme Court’s ruling that wiped out a 1992 federal sports betting ban, negotiations are just beginning in this brave new world.

The three leagues have sports-related income contracts that make the players roughly 50-50 partners in revenues. Foster said that means the players should see benefits from these sports betting deals, but Schwab said whether it will work out that way isn’t entirely clear just yet.

One thing that the players unions seem to have going for them is regular communication and like-minded views. The leagues, meanwhile, are all over the map. For example, you have the NHL surrendering on the “integrity fee” effort, the NBA, MLB, and the PGA Tour still preaching that mantra at the conference, and the NFL simply focusing on federal legislation for more uniform regulation.

“We have been working together, and … it’s better to be on this side and being aligned, than on the other side where the leagues are misaligned,” Schwab said.

Fehr doesn’t see the attitudes of the leagues the same way Schwab does.

“I’m not sure the leagues are as misaligned as you may think — or as it may appear,” Fehr said. “I think their public relations strategies may be different, but in the end I’m not sure their interests are so different.”

Fehr added of the NFL’s hope for federal legislation, “At the moment, from what I can tell, that ain’t gonna happen. There’s no groundswell [in Congress] for a federal law.”

One of the challenges faced by all of the unions is that the players they represent are individuals who can’t always be lumped together under one school of thought.

“We work for 2,000 young men, and I challenge anyone to find 2,000 human beings who all agree on anything — especially in the U.S., and especially now,” Schwab said. “With 2,000 individuals, there are a lot of different opinions. Some players, with their political, moral, or religious beliefs, they don’t say betting is a good thing. Others are fine with it. We need to balance those viewpoints.”

Foster added that it is “not by accident that you haven’t heard much from the NBA Players Association on political activity. We work for our players, and they have a wide variety of opinions.”

Advances in technology and the intersection with widespread legal sports betting may be the most overlooked angle stemming from the Court’s ruling. Both the NHL and National Lacrosse League, for example, seem eager to offer bettors a variety of gambles based on advanced measurement of player performances. The player reps have a different take.

“Our position is that players own their data, whether GPS data or biometric data,” Schwab said of his NFL players. “So there are potential privacy issues.”

“If [NBA players] are not comfortable with everyone knowing their heart rate, or when they are at the free throw line exactly how much they are sweating, then we will fight against it,” Foster said. “If information is generated from their bodies, then they need to make that decision.”

Schwab pointed to yet another pending issue: “equality between what an owner can do and what a player can do. So [Dallas Cowboys owner] Jerry Jones can go make a deal with MGM and [Cowboys quarterback] Dak Prescott cannot. That’s a problem for us.

“And our [collective bargaining agreement] signed in 2011 — while it was being negotiated in 2010, no one was thinking about compression shorts that can track your heart rate and metabolic rate,” he added.

Fehr, the senior member on the panel, seemed in agreement with the sentiments but had his doubts that the technology and sports betting tide can be halted.

“We can’t hold back time, and we’re not going to be able to completely stop it, so we’ll have to figure out a way to deal with it,” Fehr said. “We don’t have all the answers today, and anyone who thinks they know what all this will look like in five to 10 years is kidding themselves.”

Can horse racing trim its “takeout”?

Elsewhere at the ICE sports betting conference, a panel discussion addressed the impact of sports betting on the horse racing industry in New Jersey.

With legal sports betting operating on far lower betting margins that the 15% or more “takeout” enjoyed by tracks on pari-mutel wagering — sometimes now in the same building — a question was raised as to whether the horsemen can or should trim their margins.

“Everybody says that,” said Meadowlands Racetrack operator Jeff Gural. “And truthfully, if I owned a racetrack that had a casino, where the casino was funding everything, I would lower the takeout. It’s a no-brainer.

“The problem is … 90% of our business is being done off-track [via simulcast betting]. So if I lower the takeout because I feel bad for the customers, then the racetracks that take my signal won’t take it. They’ll say, ‘You’re telling me that your takeout is 10%? I’d rather get my customers to bet on a product where the takeout is 20%.’ It would require the whole industry [being unified].”

Gural added that big-time bettors get rebates that provide them more favorable margins, and he noted, “there is no evidence that lowering the takeout actually helps the handle.”

On the same panel, Colossus Bets CEO Bernard Marantelli countered that he thinks the takeout should change, citing the premise that reducing the takeout allows a bettor’s money to last longer, thereby increasing their level of loyalty.

“You’d have to go and get a variable takeout tote that allows you to take out 15% at a track where the people are dressed up and drunk and don’t know what they’re doing, and have a 4% takeout online,” Marantelli said. “That’s for people whose other options at home are, ‘Do I play a parlay at 104 or do I bet in what was a 15% racing takeout win pool, which is now a 4% takeout online?'”

So a change could happen, then?

“A different payout rate online is technically feasible, and desirable,” Marantelli said. “But to get a bunch of [racetrack owners] who don’t particularly like each other to do that — that’s not going to happen.”

What did the PGA Tour think of the Tiger Woods vs. Phil Mickelson pay-per-view match? I asked that question of Tour executive Andy Levinson after his appearance on a panel at ICE on Tuesday. I also sought clarification on reports that the Tour may have stepped in to tamp down the amount of “side bets” made by Woods and Mickelson.

“First of all, they weren’t side bets,” Levinson told USBets. “They were charity challenges. We did have the opportunity to make recommendations, but we were not the organizers and did not set the rules.

“They came to us, understanding that we have an integrity program in place, and wanted to make sure they weren’t putting the athletes in jeopardy of violating that,” Levinson said. “We made recommendations about how to phrase things, like ‘charity challenges’ — and not to turn the competition into something that devolved into just a series of bets on every hole. Make the focus on the competition, and not on the betting.”

Levinson said that both players did “great work for charity” — $800,000 changed hands — and he was pleased that “both players were grinding there at the end” of what wound up as a 22-hole match.

Nevada Sports Betting Handle Down In October, But Don’t Sound The Alarm