While this exhibition may seem impossible to wager on, there might be a few edges 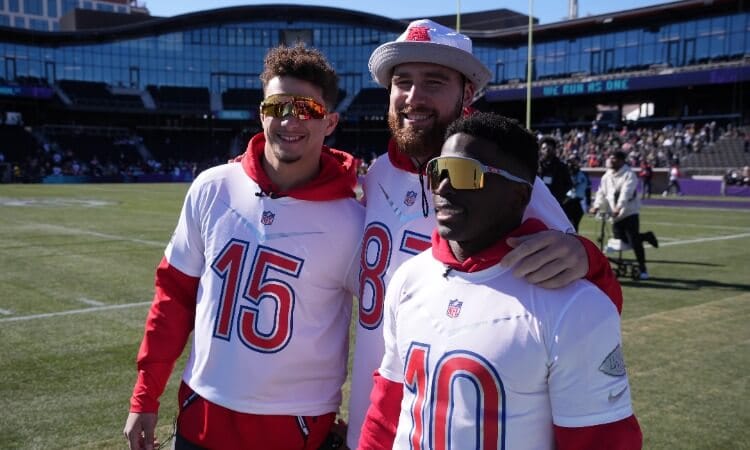 The NFL Pro Bowl is probably the most ridiculous major sporting event of the year.

While the NBA’s All-Star Game features offensive fireworks, the NFL’s version features watered-down play. While the NHL’s event changes everything – it’s a three-on-three tournament – the NFL’s game has some rule changes meant to prevent injuries and frustrate kickers (the goal posts, for some reason, go from 18 feet across to 14 feet). And while MLB’s All-Star game decides home field for the World Series, the NFL Pro Bowl decides … nothing.

Stefon Diggs jumping through tables at the Pro Bowl 🔥🔥🔥 pic.twitter.com/gydkYlHQxM

Having said that, sportsbooks began trickling out lines for the Sunday game (3 p.m. EST) late Thursday, and by Friday, a few trends were already starting to emerge.

Namely, the AFC is the betting favorite at the time of this writing. Moneyline odds are as high as -120 on Caesars and Golden Nugget, with the NFC available at +100 at both. Meanwhile, WynnBet has the teams where all the sportsbooks started: both at -110.

Of course, there is probably no way to properly handicap this game, a thought echoed by Jay Kornegay, the vice president of race and sportsbook operations at the Westgate SuperBook.

“The Pro Bowl is a crap shoot for both the bookmakers and bettors,” he said. “It’s more of a watching event than a wagering event.”

But Kornegay does note that things might be a little different this time around.

“With the growth of sport betting and the game being hosted by Las Vegas, we could see a slight pickup at the betting counters,” he said.

So, is there any edge to be found?

It’s important to note the rules for the Pro Bowl are markedly different than for regular NFL games. The major differences involve what, exactly, the defense can do on the field. For instance, there is no blitzing, defenses must play 4-3, and no nickel packages are allowed.

Add in the notion that there’s really no tackling – offensive players generally give up once there’s a defender touching them – and it would appear that offenses would rule the day.

Since 2016, when the game went back to the AFC vs. NFC format and many of the current rules were codified, totals in the games have been 33, 47, 33, and 71 in 2020’s affair (let’s year’s game was canceled due to COVID). This year’s over/under opened at 61.5 and has already been bet up to 62.5 at DraftKings and most others offering the market.

Clearly, there is some recency bias at work here. Oddsmakers – and thus far, bettors – clearly think this game will feature offensive fireworks, but three out of the last four times, not so much.

Another rule change this year might also help to keep scoring down: While there are no kickoffs (teams get the ball at their own 25-yard line), the first and third quarters will begin with what’s being called “spot and choose.” Basically, one team spots the ball, and the other team then gets to decide it they want to bring their offense or defense onto the field. This will likely result in offenses starting with the ball well behind the 25-yard line.

The #ProBowl continues to serve as a platform for game innovation — in addition to rules changes from previous years, we will be implementing the Spot and Choose method on Sunday 👇

Get the full details HERE: https://t.co/dV1hI065zt

On the daily fantasy side of the ledger, both DraftKings and FanDuel are offering decent-sized contests: FanDuel has a $7.77 tournament – the NFL Rush – with $20,000 to first place, and DraftKings has a $10 tournament – the Vegas Special – with a $50,000 first prize.

And while it may seem like building DFS single-game Pro Bowl lineups is even more ripe with hazard than simply taking sides, there are a few tried-and-true tips for anyone looking to get in on the game. For starters, running backs get precious few carries, and quarterbacks generally split the game three ways. Wide receivers – five to a side – are tough to predict.

Which brings us to tight ends, where the Pro Bowl becomes their time to shine. As to the “why,” it’s because of the rules.

Not only must a tight end be on the field at all times, each team is limited to two – Mark Andrews and Travis Kelce for the AFC, George Kittle and Kyle Pitts for the NFC. Additionally, with nickel packages being outlawed, linebackers generally end up covering the tight ends in one-on-one matchups.