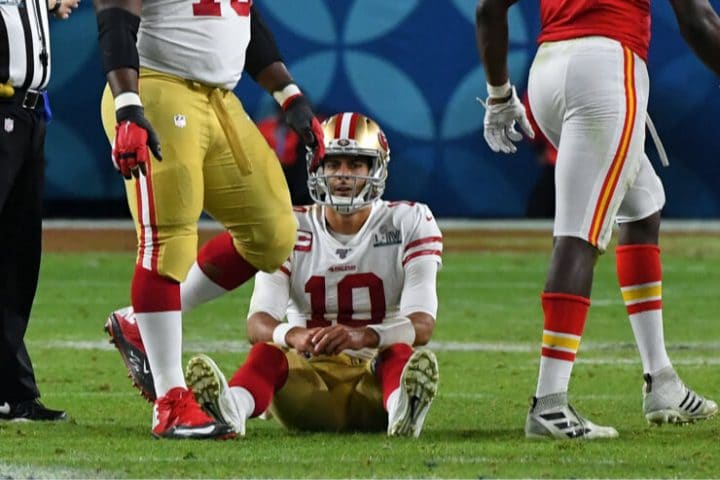 The sports betting options are extremely limited during this ongoing coronavirus crisis. But they’re a bit less limited if you possess patience.

For the highly impatient, there’s table tennis and there’s soccer in Belarus and Nicaragua.

For the somewhat impatient, there’s the NFL Draft a little less than two weeks away.

But for the patient among us, there are plenty of futures bets to be made. And with the general consensus being that, somehow or other, there will be a 2020 NFL season, futures bets on football remain attractive to many gamblers.

And when it comes to NFL futures, there’s one bet this sports gambling writer is loving at the moment: the San Francisco 49ers to miss the playoffs.

At FanDuel Sportsbook, however, the bet is considerably more attractive. FD is offering +320 odds, meaning you’re getting good value if you believe there’s better than a 23.8% chance of the 49ers cleaning out their lockers when the regular season ends.

Naturally, what comes next is some analysis of how the season might actually play out. Is there at least about a 1-in-4 chance that San Francisco doesn’t make it back to the playoffs?

Before we get into any takes on how good the 49ers will be this season, we have to consider two external factors that have changed as compared to a year ago.

First, seven teams from each conference will reach the playoffs. That’s 43.75% of the league. It makes any “no” bet dicier than in years past.

On the flip side, there’s a very realistic chance the season will be shortened. Nobody can say with certainty whether NFL games will start in September as planned. Many experts believe they will not.

Then there’s the question of, if delayed, how delayed, and if significantly delayed, can the games be made up? The bottom line is that the NFL could have a 14-game or 12-game or maybe 10-game season. And any shortening of the schedule increases the variance and makes it more likely for an inferior team to sneak in and a talent-packed team to miss out by virtue of a slow start or a couple of fluky losses.

It’s important to note that FanDuel’s online sportsbook declares, “Bets are action if season shortened. Void if season canceled or not 7 playoff teams per conference.”

With all that in mind, the 49ers — who went 13-3 last year, reached the Super Bowl, and even led in the fourth quarter of the Super Bowl — are clearly a favorite to make the playoffs. You’d be crazy to bet against them if the “yes” and the “no” were both listed at even money.

Fortunately for “no” bettors, those are not the actual odds.

One compelling reason to believe the 49ers will stumble this season is a phenomenon known as the “Super Bowl hangover.” Unless you’re the New England Patriots, a team so expertly steered by Bill Belichick and so incredibly accustomed this century to reaching the Super Bowl, getting all the way to the NFL’s championship game tends to take something out of a team, both physically and emotionally. To come close to winning it all and fall just short often leads to a letdown the following season.

The 2020 Niners certainly fit the pattern of teams that made a significant leap in a single season, went all the way to the precipice of the title, and now have to adjust to life as a team opponents will circle on their calendars. And they’ll have to do it coming off the physical drain of having played more games last year than other teams. They’ll also have to do it with a quarterback in Jimmy Garoppolo whose coach didn’t show much confidence in him, especially once the playoffs started.

Speaking of that coach, it’s been a long offseason already for Kyle Shanahan, who was second-guessed by many — including himself — for conservative decisions in the Super Bowl, and this was just a few years after he took an avalanche of criticism for his play-calling role in the Falcons’ Super Bowl collapse.

None of the above qualifies as strong evidence that San Francisco will win under 10 games and miss the postseason. It’s just a collection of factors suggesting the team might land in the vicinity of .500.

To us, those factors add up to ample suggestion that the Niners are far from a 75-percent-or-better “lock” for the postseason.

And here’s a fun catch: Even if you’re not totally convinced +333 at FOX Bet is a good price, you have an arbritrage opportunity in states with both FOX Bet and a Kambi sportsbook. At those Kambi books, where the “no” is just +238, the “yes” is -305.

Is tying up a lot of money for eight months or so with a guarantee of a small profit worth it? That depends on your personal financial flexibility.

But whether you arbitrage the bet or not, +333 on this 49ers team to deal with hangover symptoms this season is too good a price to pass up.