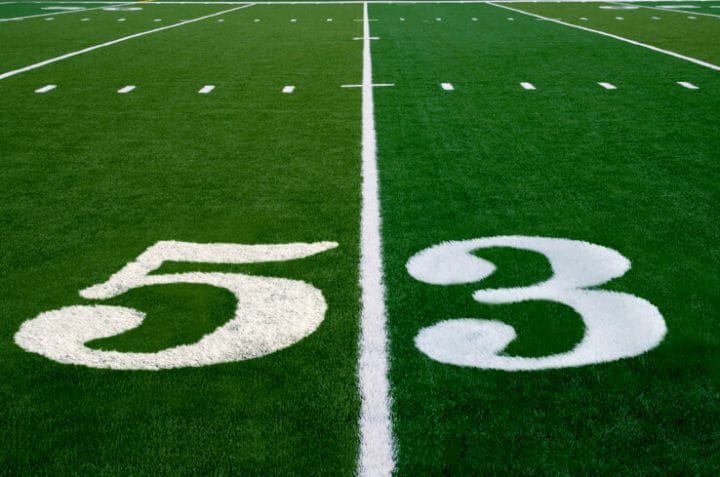 With all due respect to the Pats and their fans, most of the world is going to need a little something extra to spend the next two weeks fired up for this game.

Enter sports betting. And specifically with regard to the Super Bowl, the single biggest sports betting day of the year in America, enter prop betting.

This will be the first Super Bowl since individual-event sports betting became legal in states not named Nevada. It follows that it’s the first Super Bowl since regulated online sports betting came to New Jersey, with nine different sites currently competing for customers. By next year, barring Sheldon Adelson successfully buying his way to authoritarian rule over the gambling world, there will be several more states offering numerous mobile betting options. But for now, New Jersey is the online Super Bowl prop betting capital of the United States.

And the sites there have wasted no time getting their props posted.

Heads I win, tails you lose

Within minutes of Rex Burkhead scoring in overtime and the Pats-Rams battle for the Vince Lombardi Trophy being official, the online books were populating with betting options.

And yes, New Jersey, you can now legally bet on who will win the Super Bowl coin toss. (Assuming you’re into bets that give the house a clear, easily quantifiable edge.)

Not every sportsbook was offering coin toss bets yet as of Monday morning (FanDuel Sportsbook and PointsBet were among the notable exceptions), but at DraftKings Sportsbook and BetStars NJ, “heads or tails” is an actual question you can risk hard-earned dollars on.

At DK, it’s -106 all the way around. Whether you want to pick heads, tails, Patriots, or Rams, you’re paying six cents on the dollar for a true 50/50 bet. So you’re basically playing roulette, where there’s a 5.26% house edge on wheels with two green spots.

DK also offers a “to win coin toss and game” option, for those who like to parlay pure luck with a relatively skillful prediction.

At BetStars, the coin toss odds are truly puzzling. Heads is a 19/20 payout, almost the same as DraftKings’ vig. But tails is 17/20! Is the coin weighted? Does BetStars know something we don’t?

In any case, the coin toss is as close as you’ll come in the legal betting market to wagering on Super Bowl-related events that have nothing to do with football. All of that wacky stuff you hear about like the length of the national anthem, the first song of the halftime show, or the color of the Gatorade won’t be popping up at regulated sportsbooks because, as William Hill US CEO Joe Asher explained to CBS2’s Steve Overmyer back in June 2018, “You have to bet on things that are going to be determined on the field of play.”

All of the leading online books got Super Bowl 53 MVP odds up quickly after the participants were known, and all of them expect the public to put its money behind a quarterback. (For what it’s worth, in 23 of 52 Super Bowls, the MVP has been a non-QB.)

Here are the odds at four sites:

Needless to say, it pays to shop around a bit. (And to watch for deals; PointsBet had a “lunchtime booster” on Brady for a few hours Monday where you could get him at +200.)

Coming off the first-ever NFL playoff day with two overtime games (a parlay that reportedly paid out at close to 80/1), bettors are certainly going to be tempted to put money on the Super Bowl going past 60 minutes.

At BetStars, predicting overtime pays +800, at DraftKings it’s +900. At both sites, predicting that the game will end in regulation means laying -2000. Make bets with a vig like that at your own peril.

And every site has seemingly unlimited options with regard to manipulating lines and moving odds. On PointsBet’s user interface, there’s always a clear indication of how far away an event is and how many different types of bets players can make. For the Super Bowl, it currently reads “13 days” and “150 markets.” While the first number ticks down, the second number will only go up.

The most basic of bets

If these off-the-beaten-path props aren’t for you, every sportsbook on the planet also has simple point spreads, moneylines, and over/unders for the number of points scored in the game.

Interestingly, the line on this game started moving immediately after it was posted, and not by an inconsequential amount. The Rams opened in most books as 1- or 1½-point favorites. The books quickly realized they’d made a mistake, and by Monday morning New England was favored by 1½ or 2 points.

In Rhode Island, you can see just how quickly and significantly the line shifted toward the local team:

As the man behind the above tweet, ESPN’s David Payne Purdum, noted late last night, the 2018 Super Bowl produced a record $158.5 mm handle in Nevada. The ceiling for how much money bettors will risk in New Jersey on the Feb. 3 game in Atlanta is astronomical.

This despite the fact that we’re coming off a conference championship Sunday that served as a reminder of just how unpredictable sports can be. With the exception of bets on the over in the Rams-Saints game, every losing bet yesterday — on the moneyline, the spread, or the totals — could have felt like a bad beat. Add or subtract one controversial penalty call (some more controversial than others), move Julian Edelman’s thumb by one centimeter, change one puzzling decision by Sean Payton to pass rather than run, alter the outcome of an overtime coin toss, and these final scores all could have landed differently.

It feels like one of those days where you weren’t right or wrong so much as you were lucky or unlucky.

PointsBet is recognizing that to an extent, while also generating some good PR, by refunding losing Saints bets.

That feels like the first salvo in a feeding frenzy to attract new customers in New Jersey. The next two weeks will be a promotional blitz the likes of which we’ve rarely seen.

PointsBet offered juice-free betting on yesterday’s games, and we can expect plenty more player-friendly options like that between now and the Super Bowl. There will be odds boosts, free bets, and insured parlays as far as the eye can see.

And of course, there will be endless props. The Super Bowl matchup hasn’t even been set for 24 hours, and that part of the fun has already begun.

Will They Or Won’t They? Handicapping The States In The 2019 Sports Betting Race