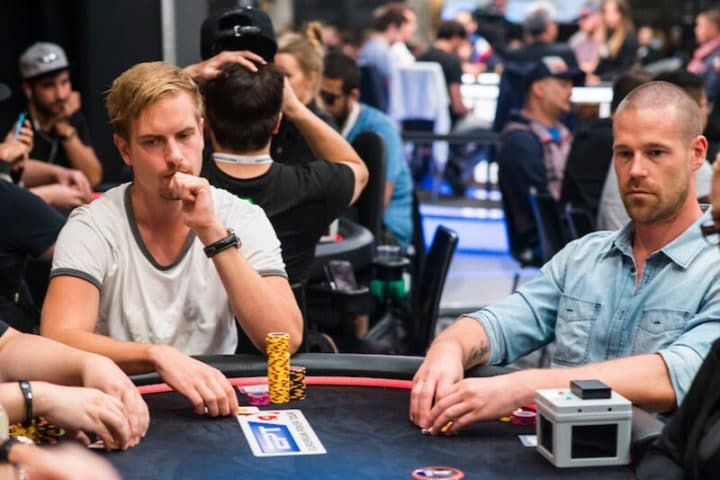 There was a time when online poker cash games were basically a spectator sport.

Today marks 10 years since the online poker world witnessed what is still a record hand, a $1.3 mm pot in pot-limit Omaha on the now defunct Full Tilt Poker. “Fasten [your] seatbelts,” one table observer in the chat box said as the money started flying in the record hand. “OMG” was the response of many others, with one person noting that one of the bets in the hand was the equivalent of wagering a yacht.

“Is this real or play money?” asked another observer, unknowingly foreshadowing what turned out to be a complicated history for a hand that set the poker world on fire a decade ago.

The two players, Viktor “Isildur1” Blom and Patrik Antonius (pictured together above in a 2018 PokerStars tournament), were in the midst of a historic high-stakes session with mind-boggling swings when the fireworks went off. At one point in the marathon match in the fall of 2009, Blom, who hails from Sweden, had his entire starting chip stack of $677k in the middle. Antonius, who calls Finland home, had him well covered in the hand. Poker fans knew history could be in the making before the flop even fell.

The stakes were a staggering $500-$1,000, but they were small relative to the chip stacks. In poker terms, the players were super deep. They bought in for $200k apiece, so it took many hands of action, and many re-buys, before their stacks accumulated to such astronomical levels. Another thing that’s remarkable about the hand is that they didn’t run it twice, a common maneuver these days by poker pros to reduce the impact of variance.

Blom started the hand as a 3/2 underdog, but improved to closer to 50-50 after the first three cards hit the virtual felt, and that’s where the last of his money went in. It was essentially a $1.3 mm coin flip.

The hand came during Blom’s historic run up the stakes on Full Tilt during the fall of that year. The seven-figure swings are now part of online poker folklore. What did Blom do after losing the $1.3 mm hand? Seemingly unfazed, he instantly reloaded for $200k and continued playing.

A record that may never be broken

It’s impossible to tell the story of the $1.3 mm pot without a look into Full Tilt’s checkered past.

The poker boom was still alive and well back in 2009, though the 2006 Unlawful Internet Gambling Enforcement Act had without a doubt poured cold water on the gold rush in the U.S. Getting money onto sites became more difficult thanks to the new law. It took until April 2011, when the infamous online poker Black Friday crackdown by the federal government occurred, before the poker boom was considered over.

It’s never been the same since.

In the April 2011 crackdown on unregulated online poker in the U.S., the federal government accused Full Tilt Poker of co-mingling player deposits (the same thing as player bankrolls) with the company’s operating money. One of the key points of regulating online poker is to make sure state officials don’t allow another online poker site to co-mingle these monies. In other words, your money is available if you want to cash out.

What did the co-mingling of the hundreds of millions of dollars of player money do to the poker ecosystem? It created artificial liquidity on the site, at least at the nosebleeds. Some of the players populating the high-stakes games were receiving large sums of money for their work promoting the Full Tilt Poker brand. It was an arms race between Full Tilt and PokerStars, the two dominant sites, before Black Friday.

Player-to-player transfers on the site also allowed the high-stakes community to effectively bypass payment processing channels. As many people know, loans and staking are commonplace in poker. Full Tilt itself was also found to have loaned millions of dollars to players. For example, according to the now defunct Subject:Poker, one high-stakes pro borrowed at least $10.7 mm from Full Tilt between 2009 (around the time of Blom’s run) and 2011. That poker pro played huge pots with Blom as well, including a $1.1 mm hand.

There’s nothing to suggest that either Blom or Antonius were playing on credit. However, a lot of money flowing through the ecosystem was money that technically belonged to millions of customers spread across the globe. Full Tilt couldn’t satisfy its player account liabilities after Black Friday, which the federal government said included about 1.3 mm player accounts in the U.S. alone. Online poker bankrolls were flush back then, fueling record-setting pots that seem almost impossible to imagine today.

Neither Blom nor Antonius were principals at Full Tilt and they never were accused of any wrongdoing. In the months after Full Tilt was shut down in U.S. cyberspace, it was reported that Antonius was at risk of losing $5 mm after accounts had been frozen. It was later reported to be money that other high-stakes players owed Antonius — and not money in his account. The discrepancy created some controversy in 2011.

In 2009, Blom was basically an anonymous player. By early 2011, his identity had officially been made public, as his story and hyper-aggressive style of play were very attractive for marketing. He signed with PokerStars.

Regulated online poker liquidity sharing between countries has proven challenging over the past decade, but recent strides in Europe have been made. Still, we might never see what Full Tilt and PokerStars were able to accomplish more than a decade ago in the gray-market era. The era when college kids in rural Pennsylvania could play poker for real money against Russians is over and appears likely to never return.

In addition to the mismanagement of player money, the massive global online poker player pools a decade ago definitely played a role in creating the conditions for such a massive pot. Blom, after all, started playing small stakes on other platforms before moving up the ladder on Full Tilt. According to HighstakesDB, he was a participant in at least the top 10 largest pots in online poker history. In 2009, Antonius had long been established as one of the game’s most feared players, but he too was able to cut his teeth early on via online poker. Rapid ascension in the online poker world was much more possible back then.

More fish in the sea means flusher bankrolls for the elite grinders. Organically, it’s hard to see the record $1.3 mm pot ever being surpassed in today’s regulated online poker environment.

Of course, a regulated poker site today could theoretically assist a customer in depositing a massive amount of money in a bid to play a poker game where the pots could exceed $1 mm (it would likely be subjected to money laundering scrutiny). But depositing the adequate bankroll is not what Blom nor Antonius did and it’s hard to see individuals with the means to play for such stakes seeking that route over playing the nosebleed session in person, whether it be Las Vegas or elsewhere in the world. There are a handful of recorded live poker cash game pots larger than the historic Antonius v. Blom hand on Nov. 21, 2019.

For lower-stakes players, the faster speed of online poker is very attractive. However, if you’re talking about seven-figure pots, the speed of online play seems far less likely to be desirable, even if you’re someone with the means to play for that kind of money. It took a mere two minutes for Blom to lose the $1.3 mm hand.

Of course, we’re only a little over 20 years into the history of online poker. It’s impossible to say what the game and ecosystem will look like in the coming decades.

Online poker’s future in the U.S.

Earlier this month, there was a positive development for the regulated online poker industry in America. PokerStars became the first legal online poker platform to launch in Pennsylvania. Already with an online poker site in neighboring New Jersey, PokerStars should eventually be able to pool liquidity between those two states. It’s up to officials in both states to work out an agreement. Caesars and its online poker partner 888 already share players across Nevada, New Jersey, and Delaware. Caesars is also expected to have iPoker in the Keystone State and pool even more players across state lines.

The 2018 U.S. Supreme Court ruling that overturned the Professional and Amateur Sports Protection Act of 1992 has ushered in a sports betting boom, fueled by online/mobile wagering. In both Pennsylvania and New Jersey, more than 80% of the handle is coming via the internet.

Other states have legalized regulated online gambling, such as Indiana, Iowa, and even casino-less Tennessee. Iowa, which years ago considered regulating online poker, kicked off online sports betting in August. It’s only a matter of time before more states regulate online casino gambling, including poker.

West Virginia has been relatively overlooked in recent months, thanks to its small population and long timeline for kicking off online poker. The state enacted a law to regulate online poker earlier this year. Additionally, Michigan is again moving the ball down the field on its legislation to regulate internet card games. It’s a slow and meticulous process, but online poker is making a comeback in the U.S. through additional regulation. The revenues aren’t there yet for operators, but the game is still poised for another boom period. As far as casino games go, poker will always have the benefit of being peer-to-peer. You aren’t competing directly against the house, and so the skill element will always be large.

The World Series of Poker in Las Vegas has remained a nationwide spectacle in the years after Black Friday. Could online poker, whether it be a tournament or a cash game, once again become must-see viewing for fans of the game? It’s hard to see it, but you never know what the deck will bring.