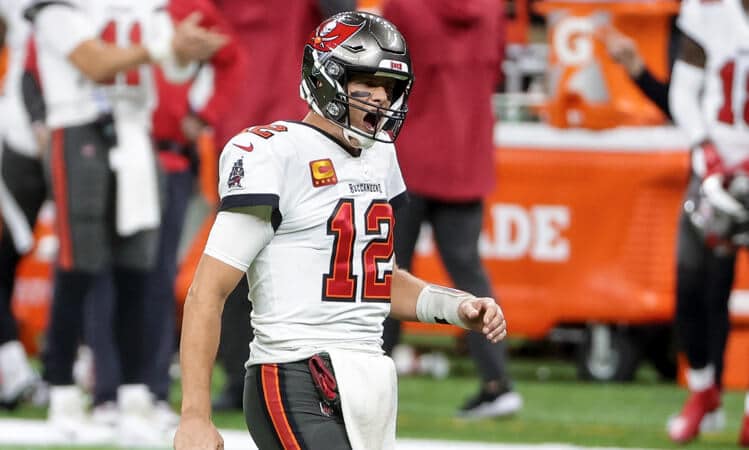 As far as mainstream American team sports go, it was the last major event played amid “normalcy.” The COVID-19 virus had arrived in America already, but it hadn’t disrupted daily life yet and it would be another 38 days before “the day everything changed” — after which turnstiles at arenas stopped turning for a while.

Super Bowl 55, this Sunday at Raymond James Stadium in Tampa, will look different. There will be approximately 25,000 fans in the 75,000-capacity stadium, along with 30,000 cardboard-cutout seat-fillers.

On the field, the game is still the game.

In the stands, it can be made to look like any other Super Bowl if you squint hard enough.

At the sportsbooks, it’s still the Super Bowl, the biggest sports gambling day of the year. But the “where” and the “how” of betting will look quite different no matter how much you squint.

On Tuesday morning, the American Gaming Association released its annual numerical expectations for wagering on the final NFL game of the season.

BREAKING: 23.2 million Americans plan to bet a total of $4.3B on #SuperBowlLV, according to new AGA research. COVID-19 and expanded access to legal mobile wagering will cause a record number of wagers to be placed with online sportsbooks. Full story: https://t.co/5ZOnt2OnZZ pic.twitter.com/LY4BctWAvP

Those headline numbers — 23.2 million people and $4.3 billion — appear enormous on the surface, but both represent significant declines from a year ago. The number of people betting on the game is down 12% from 2020, and the amount of money risked represents a drop of 38%.

The specific areas in which the AGA expects a decline are entirely logical for a population still living through a pandemic and, generally, observing social distancing protocols and awaiting their poke of a vaccine needle. According to the AGA:

Most people aren’t reporting to offices regularly, aren’t attending Super Bowl parties with dozens of friends, etc., so naturally those casual/social forms of gambling will trend downward. Betting with bookies is in decline due to some combination of the rise of legal, regulated betting and pandemic-related reasons.

But as far as legal, Vegas-style sports wagering goes, there’s a clear divide: Retail sportsbook betting is going to decline sharply; betting with online books is going to smash records.

Online sports betting was not legal a year ago in Colorado, Illinois, Michigan, Montana, Tennessee, Virginia, or Washington, D.C., but is available in all of those jurisdictions now. As a result of that expansion, of growing awareness of mobile wagering in the states that have been offering it for more than a year, and of the pandemic driving more people to conduct more of all forms of business virtually, the AGA expects a 63% increase in Americans betting on the Super Bowl with legal online books over 2020. (During the pandemic so far, 82% of all legal sports wagering has been done remotely.)

“I’m very optimistic about our Super Bowl betting numbers,” DraftKings Sportsbook Director of Operations Johnny Avello told US Bets. “The whole NFL season went well; we had record-setting handle. When we got into the playoffs, each and every playoff weekend was bigger than we’ve ever had before. So there’s no reason why this isn’t going to surpass anything that we’ve done before.

“Now, I must say, we’re in multiple new states, so that certainly helps. But I even feel those jurisdictions that we have been in in the past are going to do better this year also.”

Whether brick-and-mortar or mobile, the sportsbooks couldn’t have asked for a better Super Bowl matchup. Tom Brady and Patrick Mahomes are marquee quarterbacks, making both the Buccaneers and Chiefs “public” teams that even the most casual of football fans are familiar with.

“Hey, let’s face it, it’s a great matchup,” Avello said. “You’ve got two teams everybody knows well, a lot of well-known players to concentrate on making props with, and I think it all just adds up to a huge weekend.”

And it never hurts to have a competitive game on paper. Despite the Bucs arguably having some degree of home-field advantage, Kansas City was a 3-point favorite the morning after the conference championship games, and the line isn’t budging:

Avello notes, though, that at his book, there has been some fluctuation over the past week and a half.

“We don’t like to move numbers on the Super Bowl, you like to stay at a solid number — but we’ve actually been back and forth between 3 and 3½ a couple of times,” he said. “When we do get to 3½, it’s been a take on the Bucs, and when we get to 3, it’s been a lay on the Chiefs.”

DK has also lowered its total on the game from an opening number of 57 points to 56 as of Wednesday morning. But Avello expects that to inch back up as late “over” money comes in.

The idea of late “over” money adds a fascinating wrinkle to the betting that is unique to this pandemic Super Bowl.

Westgate Las Vegas Director of Race and Sports John Murray appeared on ESPN’s Behind the Bets podcast last week and explained to host Doug Kezirian that, in a city where in-person betting is still a substantial slice of the pie, he and his fellow oddsmakers might need to tweak their approach to adjusting certain lines.

“I do have some concerns about tourist foot traffic … because of travel restrictions, but more than anything because of capacity restrictions. Right now, we can only have 25% of our occupancy in the room,” Murray said. “When we release the props [10 days before the game], normally we know that the wise guys are all gonna come in and play ‘under’ everything, ‘no’ everything. And then next weekend we’d have tourists flood to Las Vegas and bet ‘over’ everything and ‘yes’ everything.

“This year, we just don’t know how much of that tourist write we’re going to get, and because of that, we might move it a little bit more aggressively … than we would in a normal year. Where it’s [normally] like, OK, we took three bets from three different wise guys on the under, but who cares, we’re going to get so much action on the over next weekend, we don’t want to move it too much, this year, we’ve got to do it a little differently because we do think there’s going to be quite a bit less foot traffic than there was a year ago.”

Not a concern for mobile bookmakers

Murray isn’t alone. Retail sportsbooks everywhere are expecting diminished crowds compared to a typical Super Bowl, and they can’t know exactly what to expect in terms of “square” money arriving Saturday and Sunday.

Although DraftKings does have its brand on brick-and-mortar sportsbooks in several states, such considerations related to weekend foot traffic are relatively insignificant to Avello.

“That just doesn’t mean as much to us,” Avello said. “In the Vegas market, you put up your props on Thursday [Jan. 28] and you get a line of sharp guys wanting to bet them. We’ve had, I’d say, 60% of our props up since Monday [Jan. 25]. So our props have been up a long time, they’ve been bet by sharps and unsophisticated alike. So I would say that’s not a factor for our network.”

One additional note on props from Avello: He said DraftKings, which is investing big in growing its customer base by running ads during the Super Bowl, has seen more action on the “player to score the first touchdown” market than any other prop offering.

Among the players who’ve seen the most action:

“The old guy, he’s taken a little bit of money,” Avello said. “Of course, you get him on the 1-yard line, who knows?”