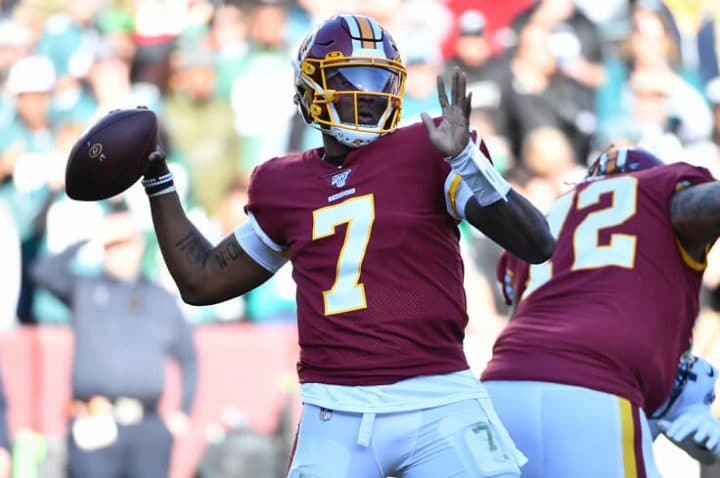 The Washington Redskins are changing their name. It’s the first time the franchise has undergone a name change since 1933. Whether they end up the Washington Warriors, Red Wolves, Red Tails, or Potato Skins (sorry), we are looking at a new era in the nation’s capital.

We’ll also include their five-year records (if applicable) before and after the change to see whether there are any trends indicating whether a name change impacts a team’s success in either direction — which, of course, is of interest to anyone passionate about sports betting who might be looking for an edge before the renamed Washington team takes the field in September. At the moment, the team is one of the longest shots in the NFL to win the Super Bowl, paying 150/1 at FanDuel Sportsbook. Its win total over-under is set at 5.

The Braves were founded in 1932 by George Preston Marshall, who would become the last NFL team owner to open up his roster to black players. They took their name from Major League Baseball’s Boston Braves, with whom the NFL team shared a stadium.

Marshall would change the name to “Redskins” the following season. The franchise was known as the Boston Redskins until moving to Washington in 1937.

In the first five seasons after the name change, the Boston/Washington Redskins went 28-27-3 and lost the 1936 NFL Championship to the Packers. The next year, they beat the Chicago Bears in the 1937 NFL Championship game, their first year in Washington, D.C.

The Staleys were named after Augustus Staley, the franchise’s founder and a Decatur, Ill., corn starch plant owner. The name lasted two seasons: one year as the Decatur Staleys and another year after the team moved to Chicago to play its games at Wrigley Field.

The team name was reportedly changed to the Bears to create synergy between the football team and the baseball team they shared a stadium with, the Cubs.

The Decatur Staleys were an independent football team in 1919, when they were named as Central Illinois champions. They then joined the American Professional Football Association (which would become the National Football League in 1922).

In two years before being renamed, the franchise compiled a 23-3-3 record and was the named AFPA champions in 1921. In the five years after the name change, the Bears compiled a 45-12-11 record and would be named NFL champions again in 1932.

In 1930, Portsmouth — the last town in Ohio before you enter Kentucky — was awarded an NFL franchise after the residents of the town built a football stadium. The Spartans played there for four seasons before moving and changing names.

A group led by radio station owner George A. Richards bought the Spartans and moved them to Detroit for the 1934 NFL season. Richards renamed the team the Lions, to complement the MLB Detroit Tigers.

In the four-season history of the Portsmouth Spartans, the franchise went 28-16-7, never finishing higher than second place. In the five years to follow, the Detroit Lions compiled a 39-18-2 record and won the 1935 NFL Championship in their second year after relocating.

As with the Boston Braves, this was another case of an NFL team taking the name of the local baseball team at the outset.

Media members reportedly gave the NFL’s Pirates the nickname of “The Rooneymen” after owner Art Rooney. The Pirates/Rooneymen were awful for seven seasons before Rooney decided he wanted a new identity for the team. A name-the-team contest was held prior to the 1940 season, and Steelers won out. The name paid homage to the region’s steel industry.

In the next five seasons, the Steelers went 17-33-4, then posted the franchise’s first winning season in the sixth year.

World War II was raging in 1943 and both the Philadelphia Eagles and Pittsburgh Steelers were short on players to fill out their rosters. The teams merged in ’43 for just one season and finished 5-4-1 after playing four of their games in Philadelphia and two in Pittsburgh.

The Eagles returned to play in Philadelphia the next season while the Steelers and Chicago Cardinals merged for the 1944 season. The Card-Pitt conglomeration finished 0-10. The war ended before the start of the 1945 season, and both franchises went back to normal operations.

Given the tiny sample sizes and the fact that in both cases temporarily changing the name of the team mattered far less than combining multiple rosters, there’s not a lot of useful information to be gleaned from these name-change oddities.

The Texans were a flagship franchise of the American Football League, launched in 1960. The NFL’s Dallas Cowboys also debuted that year.

Lamar Hunt, who was one of the founders of the AFL, decided after two seasons that Dallas could not field two professional football teams, so he moved his team north, choosing Kansas City over Miami and Atlanta.

Hunt reportedly wanted to keep the Texans as the team name but was convinced to change it. A fan contest was created to decide a new franchise nickname. The Chiefs name was chosen in honor of then-Kansas City Mayor Harold Bartle’s nickname, “The Chief.” Bartle helped attract the AFL franchise to his city.

The team went 25-17 in three seasons as the Texans and won the AFL Championship in its final season in Dallas.

The Chiefs compiled a 39-26-5 record over their first five seasons in Kansas City, including a 5-7-2 record in the first season in their new home. They won the AFL Championship in 1966, their fourth season in K.C.

The Titans allegedly got their name from their team owner Harry Wismer, who told AFL officials, “Titans are bigger and stronger than Giants.” Early in his career, Wismer was the radio announcer for the Detroit Lions.

The Titans lasted three seasons, from 1960-62, before the team was sold and President/CEO Sonny Werblin decided on the new name. It’s been reported that the Jets got their name because their home field was located very close to two airports and the franchise wanted to honor the burgeoning Space Age.

The Titans went 19-23 in three seasons. The team compiled a 29-35-6 record in its first five seasons as the Jets. In their sixth season, the Jets became the first AFL franchise to win the Super Bowl, defeating the Baltimore Colts, 16-7, in a historic upset in Super Bowl III.

The Oilers were founded in 1960 by Bud Adams as a charter member of the AFL. They won the first-ever AFL Championship on January 1, 1961. The team got its name from the booming oil industry in the Houston region.

Adams was constantly irked by the condition of the Oilers’ home stadium, and he asked taxpayers to make major improvements to the Astrodome. In 1987, a decade before moving to Nashville, Adams threatened to move the Oilers to Jacksonville, Fla. Finally, after the 1996 season, the Oilers moved to Nashville, but for two seasons they had to travel to play their home games at the Liberty Bowl in Memphis.

Tennessee’s name was changed to the Titans two years after the move, in 1999. After never making a Super Bowl as the Oilers, the team lost in Super Bowl XXXIV to the St. Louis Rams.

In the five seasons before the name change, the team spent three years as the Houston Oilers (17-31 record) and two seasons in Memphis as the Tennessee Oilers (16-16).

From 1999-2003, the first five seasons after the name change, they racked up an impressive 56-24 record, made the playoffs four times in five years, and reached a Super Bowl and another AFC Championship game — plus QB Steve McNair won a share of the NFL MVP Award in 2003.

The Browns joined the NFL in 1950 and were named after their co-founder and head coach, Paul Brown. The team was sold to Art Modell in 1961. In 1995, after the city of Cleveland would not build him a new stadium, Modell moved the team to Baltimore.

In their new city, a fan contest was held and the team was named the Ravens, after Baltimore resident Edgar Allan Poe’s famous poem, “The Raven.” The name also tied in with Baltimore’s MLB team, the Orioles.

The last five seasons of the first iteration of the Browns ran from 1991-95. Bill Belichick was their head coach for exactly that period of time and finished with a 36-44 record and one winning season (1994), which featured an 11-5 record and a divisional round playoff loss. The next year, the Browns finished with a 5-11 record, Belichick was fired, and the team moved to Baltimore to become the Ravens.

The next five seasons (1996-2000) saw the Ravens rack up three straight losing years before going .500 in 1999. In their fifth season, Baltimore won Super Bowl XXXV, fielding one of the greatest defenses in the history of the NFL. The five-year span saw the Ravens go 36-43-1.

Suffice to say, if Washington fans could be guaranteed a Super Bowl five years from now, even if they had to endure a few more losing seasons first, they would take it — under any name.

Casinos Learning About How Safety Has Become More Important Than Amenities

Holden Kushner (@holdenradio) is currently an audio/video host for RotoGrinders and RotoGrinders Sports Betting. He took up sports wagering in 2000 when he hosted a sports talk show from Mandalay Bay. Kushner spent 13 years in Washington, D.C. as a radio and television host. He currently lives in Denver and is eagerly awaiting legalized sports betting.