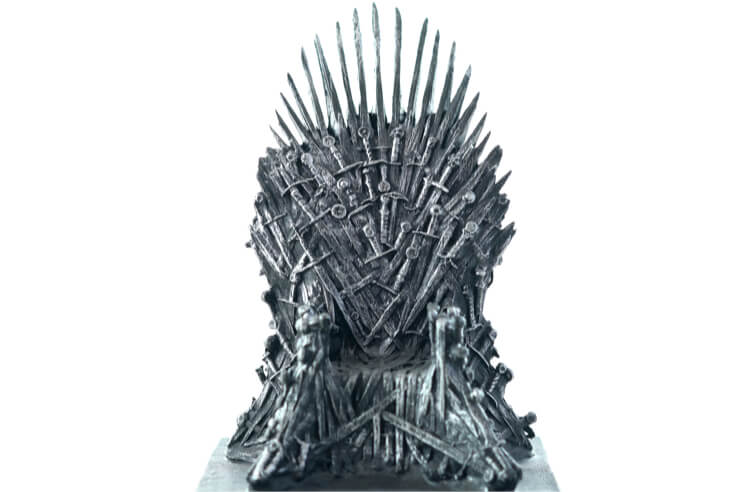 [Warning: This article contains spoilers for the finale of Game of Thrones.]

But one thing you couldn’t have lost, at least not via legal, regulated, U.S. sports betting channels, was your money.

Game of Thrones betting was a trending topic for much of the last month and a half, with offshore sportsbooks offering odds on a variety of questions (all of which every person who worked on the show knew the answers to). But in the States, if you saw such odds posted, they were for “entertainment purposes only.”

The casinos, the states, the American Gaming Association — they’re all striving to pull American gambling dollars away from these sites that don’t pay taxes here and can’t necessarily be counted on to be accountable to customers. The problem is, as long as the unregulated books can offer markets bettors are interested in that the regulated books can’t, those offshore books will have at least one leg up to remain in the picture.

The primary betting focus during this final season of the HBO mega-hit Thrones was the question of who would sit on the Iron Throne when the credits rolled.

Though I made a concerted effort to avoid spoilers all season, I couldn’t avoid hearing the news that the odds had shortened to a highly suspicious degree on Bran Stark, the warg-ing, wheelchair-bound youngest living child in the series’ central family. So it was no surprise when, midway through Sunday night’s finale, Tyrion Lannister suggested Bran be the new king and everyone said, “Aye.”

It should have been a surprise, though. Bran should have felt like an out-of-left-field choice. There was one entire season, in fact — Season 5 — in which Bran didn’t appear at all. As Rolling Stone’s Alan Sepinwall wrote this morning, “Giving the crown to Bran is like giving the Super Bowl MVP to the long snapper.”

It was only the offshore books who said Bran wasn’t a far-flung choice, and that was obviously the result of plot leaks and inside information coming out.

Though this article on mainstream entertainment site TheWrap.com incorrectly credits “Vegas” for the posted odds, it otherwise does a good job spelling out how “sizable bets” moved Bran from a 12/1 underdog to even money in between the fourth and fifth episodes of this season.

Heading into the finale, Bran was -350 on one site and -500 on another (with Sansa Stark, Jon Snow, and Tyrion all lurking between +400 and +800). Clearly, the word was out as to what had been filmed, and the steam chasers were on board. And unlike the now-infamous Yorgos Lanthimos tip at this year’s Oscars, this leak proved accurate.

This Bran/Iron Throne situation spells out quite clearly the problems with allowing betting on anything where the results are predetermined, whether it’s scripted TV, pro wrestling, or any number of key NBA playoff games over the years. (We kid, we kid. Sort of.)

But it gets even more complicated when you consider that there was no Iron Throne at the end of GoT. A dragon melted it down with his halitosis breath in the scene before Bran was anointed. So whether to recognize Bran bets as winning bets depends on how the site worded the question.

Who will rule Westeros? OK, cash your Bran ticket.

Who will sit on the Iron Throne? Technically, the offshore books should be paying out on “nobody” if they offered that choice, or refunding all bets if they didn’t.

While the question of who would rule got the most attention, there were plenty of other betting options available.

For numerous important characters, there were simple yes/no questions of whether they would or wouldn’t survive.

After Daenerys Targaryen broke bad in the penultimate episode, Jon Snow was -300 to kill her heading into the finale. As with the Bran Stark odds, someone knew something.

There was a “Who will kill Cersei Lannister?” market heading into the season, and after she and brother/lover Jaime were crushed under the rubble at the end of Episode 5, there’s no clear answer to the question. Do you pay out on Dany, whose fire-breathing dragon caused the building to partially collapse? Do you pay out on the dragon? Can an inanimate object — crumbling stones — be considered the killer? Does “the field” pay?

One prop offered was how many people Arya Stark would kill in the final season, with the line set at 3.5. Now that the season is over, your guess is as good as mine whether the Night King counts as a person, and whether Arya gets credit for killing all of his soldiers when she killed him.

And are these results all official now? Or do we have to wait to see how the petition to rewrite the end of the show goes? (To the 1.2 mm people and counting who’ve signed it, allow me to quote William Shatner on Saturday Night Live: Get a life, people!)

Of all of this season’s Game of Thrones controversies, perhaps the most telling was that a 21st century real-world coffee cup was spotted in an era-unspecified-but-very-Middle-Ages-esque alternate universe. And after all the heat that the production team took for that oversight — culminating with it being digitally removed for all future airings of the episode — they did it again with a water bottle last night:

LMAOOO I CAN'T BREATHE THEY DID IT AGAIN 💀💀 First Starbucks now a water bottle this show is a joke #GameOfThrones #GameOfThronesFinale #TheFinalEpisode pic.twitter.com/9YaFF8Pnm6

These blunders help to underscore the point that betting on the decisions made by David Benioff, D.B. Weiss, and the rest of the GoT crew is a risky, perhaps reckless, proposition.

That said, even the offshore books tend to keep betting limits low on offbeat markets like this. You can’t win or lose life-altering money.

But as the numerous examples above make clear, you can find yourself with unclear results or with outcomes where it feels like the fix is in.

Over the many decades of legal betting in Nevada, the commission has spelled out clearly that it will not allow books to post odds for real money on such non-sports events. In states newer to sports betting, Pennsylvania says no to non-athletic-event betting, while New Jersey has at times said yes.

But even the NJ Division of Gaming Enforcement isn’t cool with betting on scripted TV. The Academy Awards felt like a reach to some, but at least that’s a real competition. And the NFL Draft is at least directly related to a major professional sport.

Even at tiny limits, allowing betting on Game of Thrones or other TV shows, cases in which hundreds of people see the scripts months in advance, opens books and bettors up to countless conflicts and controversies.

Sports betting is slowly working its way out of the shadows and going legit. The battle for a healthy reputation can’t be rushed like so many Season 7 and 8 GoT plot developments.

Yes, letting the offshore books offer odds on markets that the regulated books can’t gives those unchecked operators a toehold. But this is one case where it’s better to concede some ground to them than to follow their lead. You don’t need Bran Stark’s vision to see which path would lead to a more troublesome future.