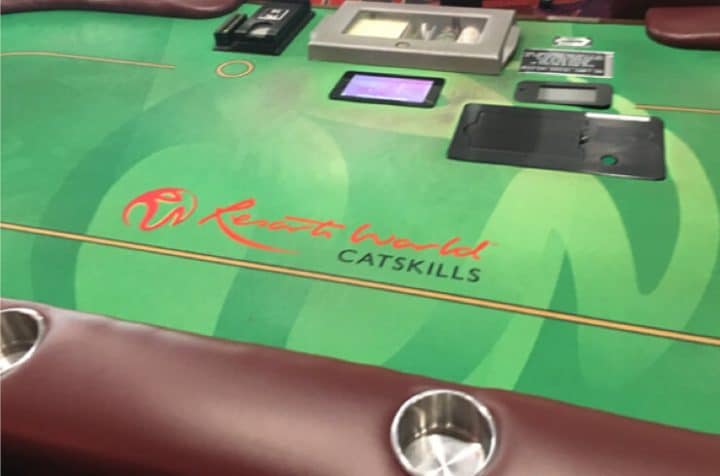 There’s lots going on at the Resorts World Catskills casino these days.

It’s the height of the summer season in the region (think Dirty Dancing), drawing plenty of tourists from afar.

A new, larger poker room recently debuted in a more visible area of the property.

A new sports bar — which looks awfully like a sportsbook — seems poised to be open for sports betting on ballgames any day now (and likely will).

And, well, last week the property’s owner sounded the drumbeats even louder about a potential bankruptcy.

But first, the fun stuff.

The new poker room at the 18-month-old property, across from the Good Friends Market restaurant, on the first floor, features 20 tables and 180 seats. Our visit mid-Tuesday afternoon showed seven full tables — not bad for that time of day.

A variety of poker offerings are promised beyond standard limit and no-limit Texas hold’em, including 7-card stud and both pot-limit Omaha and Omaha hi-lo.

Next week, there is a $100,000 guaranteed Texas hold’em mega stack tournament from Tuesday to Saturday.

Nearby is a sportsbook that, as of June, was allowed to be offering wagering. Tioga Downs and Rivers casino in Schenectady further upstate began such betting last month, but on Tuesday not only were there no bettors at Resorts World, there wasn’t even a bartender.

But it’s a nice enough space, and we spied six self-betting kiosks and the inevitable sports version of an LED stock ticker whirling odds around and around.

So when does it open? Most employees we spoke with didn’t know (or they have good poker faces). But one finally volunteered that “this weekend” is a real possibility. All suggested the opening was imminent, and in time for the start of football season.

The combination of more poker and sports betting is part of a general improvement of a visitor’s experience at the Sullivan County site not too far from fabled Monticello Raceway — and that’s not including lures like 1,600 slot machines, 150 table games, a spa, and a steakhouse in the casino.

The Kartrite Resort & Indoor Waterpark next to the casino features 324 suites with what is called a “luxury lodge experience” along with New York State’s largest such waterpark.

A high-end 18-hole golf course will be completed next year, as will a Legoland amusement park. The site of the 1969 Woodstock festival is in the area (the casino has many nostalgia bands featured this month), as is Woodbury Common — sort of a discount shopping mall on steroids.

Throw in the classic hiking and fishing opportunities that have always lured visitors, and the area may be nearing a critical mass of attractions that could boost annual tourism significantly. It doesn’t hurt that the popular series The Marvelous Mrs. Maisel featured the Catskills in several episodes.

But … the casino has lost $37.5 million in the first quarter of 2019, following a disastrous opening year with losses of $138.7 mm. The casino cost nearly $1 billion — most of it debt — and projected revenues have fallen far short each month for the closest full-scale casino to Manhattan (Yonkers Raceway and Aqueduct don’t have live table games or a hotel/spa). Overall, the monthly shortfall of expectation vs. reality has averaged more than 40%.

Nearly 90% of the casino is owned by a company backed by Malaysian billionaire K.T. Lim, whose big Catskills gamble so far is failing.

With that in mind, the company now seeks to go the private route.

That would happen through a series of complex transactions that ultimately would simplify the ownership structure.

The first warning — though not unexpected given the rough financials — came in a Securities and Exchange Commission filing last month that informed a special commission to the casino’s board that the casino “has been unable to become financially self-sustaining from revenues from its operations, and does not appear to have any reasonable prospect for becoming financially self-sustaining in the future.”

Experienced Atlantic City observers can recall numerous casino properties there that have plunged into bankruptcy, kept the doors open, and lasted for years.

Will the new amenities inside and outside the casino’s doors be enough to save Resorts World Catskills?

Winter is coming, literally and figuratively. A bankruptcy filing would increase the odds that the summer resort town still has an operating casino next spring. A closure would be a significant black eye for Gov. Andrew Cuomo, whose backing of the opening of four upstate casinos was supposed to revive each region’s economy.

It’s bad enough that all four have not matched their rosy economic projections. A closure of the largest jewel in the collection would cause both economic and political pain.