Review: Fox Sports’ ‘Lock It In’ Gambles On Viewers’ Appetite For Betting Content

The new Fox Sports 1 gambling-centric sports show Lock It In is lively and entertaining, but it has one fatal flaw. 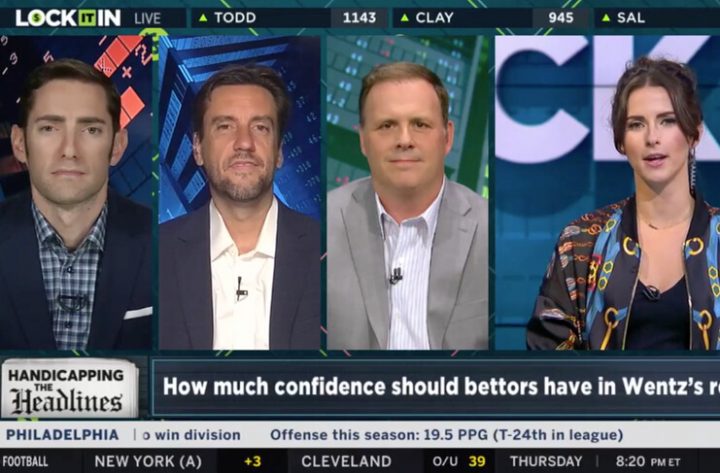 If you took the under on a line of four months between the Supreme Court reversing the law banning sports betting in most states and a major cable network launching a show all about sports betting, go ahead and cash your ticket now. Lock It In debuted on Fox Sports 1 on September 10, becoming the first American TV show (joining countless podcasts and online-only shows) to talk about sports strictly through a wagering lens.

The ratings have been less than stellar. In its first week, the show averaged 46,000 viewers a day. While the Friday uptick to 60k might have been considered encouraging, the Twitter account @SportsTVRatings was still mocking away in Week 2, noting that ESPN’s programming in the same time slot (4:30-5:30 p.m. ET) was rating 13 times higher.

New shows often take a while to find their audience. This is far from an apples-to-apples comparison, but the world would be a very different place if NBC executives had made up their minds about Seinfeld after one low-rated (relatively, for 1989) week.

At the very least, US Bets wanted to give Lock It In a full week to work out some kinks before penning a review. But after watching a couple of Week 2 episodes, we’re starting to develop a sense of what’s working, what isn’t, and what singular change could significantly elevate the show.

Like Seinfeld, Lock It In’s on-air talent consists of three men and one woman and would never be accused of being ethnically diverse.

Rachel Bonnetta plays the role of host and traffic cop, and the Canadian is unmistakably relaxed on camera, striking just the right casual tone. There’s nothing stuffy about her persona, nor should there be on a show this full of ribbing, banter, and testosterone.

Bonnetta is the only member of the team who’s in studio; her three cohorts all appear via satellite.

Former Caesars oddsmaker Todd Fuhrman, the host of the Bet the Board podcast, brings gambling expertise and numbers nerdistry to the show, not to mention he’s been excellent (so far) at actually predicting outcomes of games. (He nailed Trey Burton at 10/1 to score the first touchdown on Monday night, among other outstanding calls.) Furhman is a bit robotic for TV, but otherwise, not much to criticize.

Sal Iacono, better known to much of the public as “Cousin Sal” from Jimmy Kimmel Live (he is, in fact, Kimmel’s cousin, and a writer on the late-night show), brings common-man relatability and a sharp sense of humor. Plus he’s a longtime sports betting enthusiast, hosting the Against All Odds podcast and appearing on Bill Simmons’ podcast for nearly a decade to predict NFL lines.

As for Fox Sports Radio host and sometimes lightning rod for controversy Clay Travis, it’s less clear what he brings to the table. Travis has a bit of that “empty sports talking head” to him; he’s any old Around the Horn panelist. He’s by no means bad on Lock It In, but he doesn’t add much to the viewing experience, other than providing a punching bag when Iacono is in roasting mode.

The group’s interactions are relatively smooth for four earpiece-wearing talking heads in four different locations, though occasionally audio lags and delays will hurt the flow and the panelists will start talking over each other or pause awkwardly.

Like most modern sports-talk TV shows, Lock It In is heavily segmented and built around quick topic changes. There are some segments that come and go, but four appear to be a part of the lineup every day:

Here are an assortment of additional thoughts on the show, starting with a criticism of an inexcusable production decision:

Iacono told the New York Post recently, “By this time next year, there are going to be 10 shows about gambling.” That projection was made, however, before viewership numbers in the 40,000 range started coming in.

It’s natural to wonder whether the early low ratings bode poorly for other shows in the mold of Lock It In.

There will assuredly be more of them, and ultimately Lock It In’s legacy might be that it serves as a template that ESPN and others can learn from before launching their own equivalent.

The big takeaway for me is that an hour every day is just too much. Lock It In would work much better as a half-hour show, like PTI and Around the Horn.

Iacono was just complaining, rightfully so, that Kimmel’s nightly hour-long show shouldn’t have to compete for an Emmy against weekly 30-minute show like Last Week Tonight With John Oliver, because they’re facing drastically different degrees of difficulty.

Want to make Lock It In easier for viewers to add to their daily rotation, Fox Sports? Lower the degree of difficulty. Cut the show in half. Lock It In is an idea whose time has come, and it’s mostly well executed, but it’s stretched far beyond its optimal length.