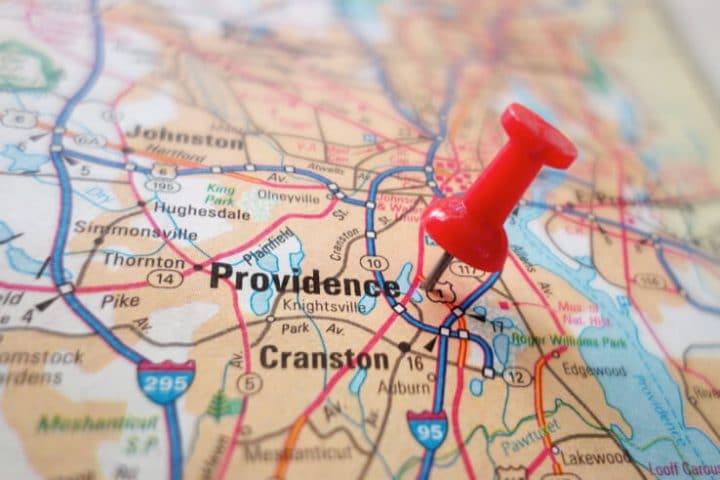 Rhode Island is the first — and for now, only — state in its region to offer legal sports betting, so state Lottery Executive Director Gerald Aubin offered some friendly advice to legislators and other interested parties at a University of New Hampshire Law School event on Wednesday.

“It does take some of the fun out of watching these games,” Aubin told the audience in the first panel of an event titled The Future of Regulated Sports Gambling in New England. “You sit there figuring out how much you might lose.”

The day the books got beaten up

The perfect example in that region, of course, was last month’s Super Bowl between the New England Patriots and the Los Angeles Rams. The Patriots not only won, but also covered the spread, which was 2.5 points at most books and went up to 3 in Rhode Island.

“I wanted [the Patriots] to win — but only by two points,” Aubin said.

And while Aubin smiled as he said that, well … the state’s two casinos, currently the only places to make a legal wager in The Ocean State, took on losses of $2.4 million on a betting handle of just $6.5 million as locals bet with their hearts and saw it pay off.

Aubin said that about 85% of the early betting was on the Patriots. The Rhode Island casinos added a half point to the spread, Aubin said, “hoping to get a little edge. But we wanted to be competitive not only with other states but also what was happening [illegally] on the street.”

The presence of the Patriots in The Big Game lured thousands of bettors, with Aubin noting that not even 14 teller slots were enough to prevent 90-minute waits two days before the game. The challenge was two-fold, Aubin said: relatively-inexperienced tellers and “bettors who don’t know how to do it, either.”

Alone on an island

How did Rhode Island get such a jump on the rest of the New England states, all of which are currently debating the topic in their respective legislatures? Aubin said state lottery officials “started looking at this” in December 2017. (That happens to be the month that a U.S. Supreme Court hearing in Washington, D.C. convinced many sports betting legalization backers in attendance that victory was at hand.)

Aubin added that while he is glad the state moved “aggressively,” he is pleased that they took just long enough to miss what would have cost the Lottery millions more: the Boston Red Sox winning the World Series last fall.

“You need a thick skin to do this, so you can be prepared to lose a lot of money in a single given day,” Aubin said. “It’s an opportunity but it’s not like a scratch-off ticket.”

As for the demographics of the Rhode Island sports bettor, Aubin said it is “heavily 30-to-50-year-old males. Very few females are in line to place wagers — for what reason, we don’t know.”

March Madness beckons, and Aubin said that the debut of multiple self-betting kiosks on Thursday might help the casinos avoid some of the backup that occurred on Super Bowl weekend. Aubin again expects sports fans from Massachusetts and Connecticut to make a journey to Rhode Island’s casinos as “the only legal game in town.”

Of course, by next year those problems may disappear. On Tuesday, the state Senate approved an online betting plan for the state, setting the stage for Gov. Gina Raimondo, a proponent of sports betting, to sign the bill and pave the way for mobile betting in the state this fall.

There are nearly a dozen bills pending in Massachusetts regarding sports betting, and Gov. Charlie Baker has pitched a different twist: no betting on college sports at all. Bettors in New Jersey, Rhode Island, and New Mexico cannot wager on in-state college teams and games, but can bet on other college events.

State Sen. Brendan Crighton and Rep. Dan Cullinane each expressed optimism that the competing bills can be reconciled.

“With official data you get speed and reliability, and it is the product that these leagues are putting forward [as the subject of the bet],” Cullinane said. “They’re left holding the bag anyway, so they should be at the center of things.”

Cullinane also said he is pleased that Massachusetts did not “sprint” toward sports betting legalization after the Supreme Court paved the way for it last May.

“We can take a deep breath and figure this out, as we watch what is happening in other states,” Cullinane said.

FanDuel President Kip Levin was asked during another panel discussion what advice he could give based on the company’s partnership with the Meadowlands Racetrack.

“At the end of the day, if what you want to do is go after the illegal market, you have to have mobile and you can’t have too many restrictions put in place — like having to go to a casino to sign up,” Levin said. “At the illegal books, you don’t have to do that.”

Levin claimed in passing that FanDuel’s daily fantasy sports arm has continued to grow — even in New Jersey with legal sports betting available. He also said that in-game betting now makes up the majority of total betting.