Will The Rise Of Robo-Umps Help Or Hurt Baseball Bettors? 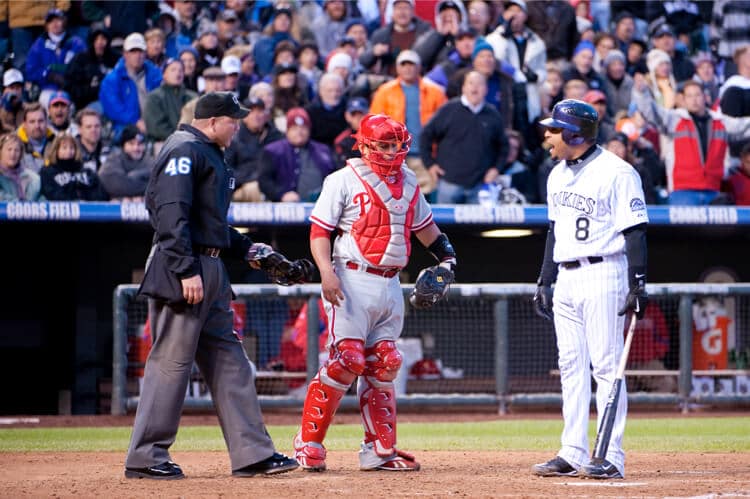 Hockey purists may bristle at this suggestion, but here’s the truth: For sheer entertainment value, there’s nothing like a good, mid-ice brawl between a couple of enforcers. Whatever tedium existed up until that point evaporates when the first glove comes off. This makes the mile-long traffic jam outside the arena and the exorbitantly priced suds worth it, even in the event of a scoreless tie.

Same with baseball when a manager goes ballistic on an umpire — shouting, swearing, and even spitting should a call go against his team at a critical juncture. To watch the likes of Earl Weaver, Billy Martin, or Lou Piniella lose their marbles and get ejected could be as sweet as the Splendid Splinter stroking a dinger.  Such meltdowns were all so messy, so relatable, so … human.

But there’s a reason why we’re speaking in past tense here. In 2010, Detroit Tigers pitcher Armando Galarraga had a perfect game going with two outs in the ninth inning. What should have been the final batter looked clearly to be out at first after hitting a slow grounder. But umpire Jim Joyce called him safe. Shortly thereafter, Major League Baseball allowed the use of instant replay to right such wrongs, and managerial tantrums went on the wane.

But the calling of balls and strikes remains a matter of individual discretion, at least in the bigs. For several years, Major League Baseball has been experimenting with robotic umpires with a homogeneous, pre-set strike zone — but only in the minor leagues. There’s still a home plate ump, to be sure, but all he does is parrot what the robo-ump signals.

The robots ruffled some feathers at first, but they are now overwhelmingly popular and seem destined for the majors. Yet the transition will not be seamless, for fans and sports bettors alike. Games with robo-umps tend to last a lot longer, which would seem to be at odds with baseball’s never-ending effort to speed things up to attract younger, attention-deprived fans. Baseball-betting sharps, meanwhile, have long looked at tendencies of who’s behind home plate for a potential edge to outfox oddsmakers, but some with wagers on the game might see it from a different angle.

Part of the game — of gambling

Veteran Vegas oddsmaker Dave Sharapan seconds the notion that it was “so much fun” to witness the likes of Weaver, Martin, and Piniella wigging out way back when. Same with perhaps the most prolific arguer in the history of sports, John McEnroe. But while tennis still has its whiners, automatic sensors that Sharapan says “can tell whether a 128-mph serve is out by a quarter of an inch” have all but ensured that McEnroe will remain unrivaled in his penchant for quarreling with chair umpires.

“When I watch a tennis match now, I don’t feel like it’s not right,” said Sharapan. “Baseball needs to find a way to get there. To get it right is the most important thing. In the spirit of getting it right, I don’t want to take away the human element of it all, however we can do that.”

Referring to human baseball umpires, Sharapan added, “You want consistency, but when it’s consistently bad, that makes for a bad game.”

For fans and players, sure. But seasoned bettors are used to being on both sides of a bad beat. It’s all part of the game — the game of gambling.

“We all know that questionable calls are pretty common in the NFL, and that doesn’t deter bettors whatsoever,” said John Murray, executive director of operations at the Westgate SuperBook. “I’d like [robo-umps] as a fan, but part of gambling is you might lose because of a bad call, you might win because of a bad call. That’s all just rolled into gambling.”

Robo-umps a potential boon for micro-betting

In the New Yorker article, an Atlantic League umpire chief groused about a robo-umped game in Pennsylvania that took five hours, featured 35 walks, and finished with a final score of 16-14.

As a fan, that sounds pretty unappetizing, especially if the score is more lopsided and the “person” calling balls and strikes is completely unaware that everyone in the ballpark probably wouldn’t mind seeing the strike zone expanded, for mercy’s sake.

“As a fan, when it’s a 16-1 game, do you want an umpire calling everything by the books?” wondered Teddy “Covers” Sevransky, a Vegas-based professional gambler.

But the prospect of longer games may be music to the ears of a bettor, especially one who’s interested in exploiting in-game angles.

“The future of sports betting is micro-bets,” said Sevransky. “And for MLB, that’s a fairly small piece of the puzzle. The more time there is between pitches, the more of those bets that will happen. You’d be shocked at how much you can bet, even at $5 a bet, if you’re betting pitch by pitch. The volume could be exponentially higher.”

“One of the things that hurts micro-betting is the window you have to place the bet is so small,” added Murray. “If there were a little more time between pitches, that would definitely be good for in-game wagering. We see a lot of our NFL and college football in-game wagering during commercial breaks because people have more confidence in those bets when they have more time.”

‘That’s what the best bettors do’

If the rise of the machines seems inevitable, you’d best prep for a rain delay. As The New Yorker points out, Major League Baseball’s umpires’ union has been rigid in its stance that “it is the umpire’s decision to make whether it’s a ball or strike,” and the union will have considerable say over whether TrackMan technology makes it to the bigs.

Where robo-umps could soon gain a foothold is in baseball’s amateur ranks, where umpire shortages have plagued Little Leagues and beer leagues alike. Isn’t a $20,000 contraption capable of peerless accuracy superior to someone’s parent or pal strapping on the chest protector and mucking things up?

Certainly, but as far as the big leagues are concerned, Robert Kowalski, head bookmaker for ZenSports and The Book at Baldini’s, feels that while robo-umps “would be felt, especially at the plate,” they “would be a net zero” for gamblers, “as the Paul Clemons of the world would be washed out with the Eric Bacchuses of the world.”

"These balls are… They're clearly balls. Balls in off the plate. Balls away. Balls low."

Paul O'Neill does not approve of this umpire lol pic.twitter.com/25lEBixeEw

“From a betting standpoint, I don’t know how to react,” added Sevransky. “The answer is: We don’t know. There is some seasonal umpire bias when it comes to betting baseball totals. There was the classic under umpire back in the day, and this would eliminate that, which some bettors view as an edge.

“But you have to be able to bet on the fly, and that’s what the best bettors do. And if you adjust faster than the bookmakers do, that’s how you make money.”