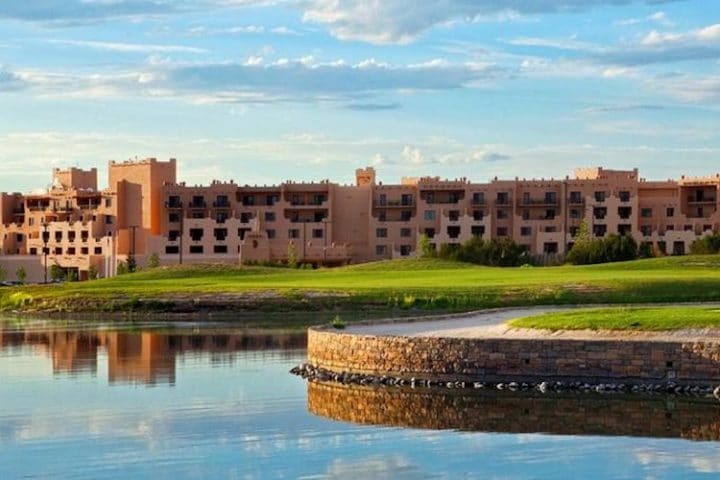 Less than six months after launching sportsbook operations at a resort near Albuquerque, the Santa Ana Star Casino & Hotel has its first competitor in New Mexico.

While the casino becomes the second in the state to roll out a sportsbook since the Supreme Court struck down a federal ban on sports gambling last May, Buffalo Thunder is the first to offer wagers on sports in conjunction with race wagering.

The sportsbook operation is a joint venture that will be run between the owners of National Sports Book Management (NSBM) and the South Point Hotel & Casino. NSBM is founded and owned by John Gaughan and Jay Vaccaro.

Under the deal, Gaughan’s Las Vegas Dissemination Company (LVDC) will provide a full suite of sportsbook and pari-mutuel race solutions, including kiosks, hardware and software support. The group has selected the Stadium Technology Group to provide the sports betting technology.

Owned and operated by the Pueblo of Pojoaque Corp., the Buffalo Thunder Casino offers nearly 70,000 square feet of casino gaming. The opening Monday could spur other tribes throughout the state to consider sports betting initiatives.

A spokesman from the New Mexico Attorney General office told Sports Handle in October that it is possible that the office could work with state legislators to develop a regulatory framework for other tribal venues statewide.

“Sports betting at the Santa Ana Star Casino is governed by the Pueblo of Santa Ana Gaming Regulatory Commission,” said New Mexico Attorney General spokesman David Carl. “As such, we will closely monitor New Mexico’s tribal gaming compacts and work with the legislature for proper statutory and regulatory oversight to require responsible gaming and enhanced integrity to create an even playing field for all.”

The Santa Ana Star Casino & Hotel near Albuquerque, with risk-management and operations by US Bookmaking, opened in October 2018.

The Buffalo Thunder sportsbook opens just in time for March Madness — the second largest sports wagering event in the U.S. after the Super Bowl.

Tennessee Governor Appears To Have Done 180 On Sports Betting Opposition

Matt is a veteran writer with a specific focus on the emerging sports gambling market. During Matt's two decade career in journalism, he has written for the New York Times, Forbes, The Guardian, Reuters and CBSSports.com among others. In his spare time, Matt is an avid reader, a weekend tennis player and a frequent embarrassment to the sport of running. Contact Matt at [email protected]

Behind The Counter: A College Football Day In The Life Of A Vegas Sportsbook