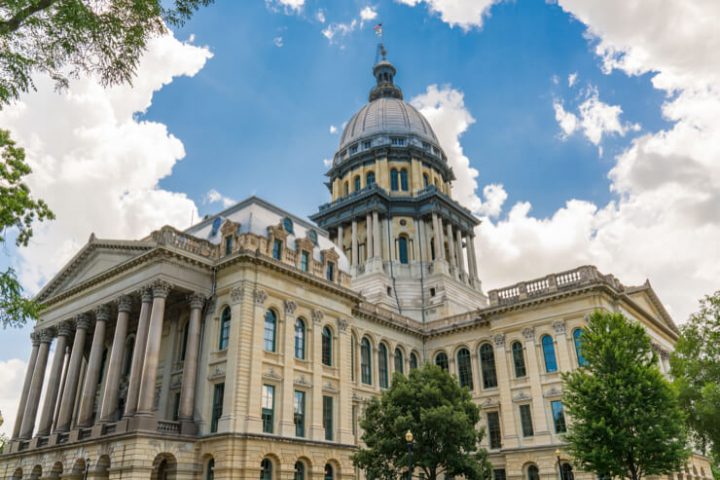 Washington, D.C. and Springfield, the state capitol of Illinois, played host to back-to-back hearings on sports betting legalization on Wednesday.

What did we learn? That the timelines and levels of urgency are very different.

The D.C. City Council is in a hurry to get out ahead of their neighbors in Virginia and Maryland, while an Illinois House of Representatives committee, as well as several guest speakers, stressed that such legalization should not be rushed.

While much of the six total hours or so of testimony at the hearings produced rehashes of the same pro and con arguments, there were novel comments.

Perhaps the most interesting was a recommendation by Illinois House member Lou Lang regarding what several sports leagues have described as “integrity fees.”

“The leagues say, ‘We want you, Illinois, to pay us a fee for the privilege of showing your games,'” Lang said. “My views on this are different. I’ll give them a fee for something, but not a fee for nothing. Any fee they get ought to be in exchange for information we need — data, pictures, strong marketing data. I don’t want to pay them for nothing.”

A different twist on integrity fees

Lang’s idea is that the state could use such data to fine-tune their own marketing to gamblers, with the ability of legal sites to use team logos and photos to differentiate those from illegal offshore books (Lang even mentioned one such illegal book and spelled out the name, which we’ll decline to do).

The NBA, MLB, and the PGA Tour have combined forces is an effort to obtain such a fee (from gambling operators, not the states), although none of the states that have passed sports betting bills this year has included language that would force operators to pay one. The NBA’s Dan Spillane, representing the trio of leagues at the Washington, D.C. hearing, sought the now-standard 0.25% of handle (amount wagered).

An American Gaming Association official spoke out against the integrity fee concept in Springfield, and no one rose to the leagues’ defense.

The NBA did sign a deal with casino industry giant MGM in July that nets the league a reported $25 million over the next three years. That deal allows MGM casinos and websites to use the NBA’s logos, although it’s not clear what other benefits MGM receives.

Lang said quick passage of a law in Illinois could leave the state making the sort of mistake that he said Pennsylvania did with its 36% sports betting tax rate that is “far too high because they didn’t understand how different sports betting is from other types of gambling.”

Sports betting legalization also is not the “cash cow” that some proponents claim, Lang added.

“No one should think that this solves the problems of the state of Illinois — we’re not going to pay off our pension debt with sports gambling,” Lang said.

Where in Illinois will sports betting be offered?

A key question to answer, Lang said, is who should be allowed to offer sports betting. Illinois has an unusual gambling template, with almost 30,000 video gambling machines located all over the state (but not in cities that ban it, such as Chicago, Naperville, and Schaumburg). So unlike New Jersey, which has Atlantic City casinos and a pair of racetracks offering sports betting in the brick-and-mortar sector, Illinois legislators are wrestling with how widespread to make walk-up betting.

There also is extensive interest there in legal online sports betting, with GeoComply VP Regulatory Affairs Lindsay Slader — whose company runs online gaming geolocation in New Jersey, Nevada, and Delaware — explaining how that has worked out over the past five years.

“We are not the only ones who can do it, but nobody else bothered to do this dirty work,” Slader said. “It’s a constant game of cat-and-mouse [against would-be hackers]. People still hack into the FBI. Nothing is 100%.”

Lang listed many other issues ahead, including whether to allow betting on Illinois University games (college events in New Jersey are not legal to bet on in-state) and how far down to go — perhaps even to minor league baseball.

Longtime New Jersey-based gaming analyst Michael Pollock came to Springfield to offer his advice on how to proceed.

“Ignore the calendar on any expansion of sports betting,” said Pollock. “I’m not a golfer, but I abide by a sports metaphor: There are no ‘mulligans’ in gaming. Get it right the first time.”

Finally, Illinois horsemen — who are in a similar boat to their New Jersey counterparts in struggling to compete with slot-machine-revenue-fueled racing purses in neighboring states — tried to make their case for turning racetracks into casinos.

Representatives for the players’ associations of the NFL, MLB, and NBA spoke at the Illinois hearing about their concern that the spread of legal sports betting will increase the threat to the safety of players and their families due to the frustrations of new bettors losing money.

Considering that the illegal sports betting market has been speculated to be in the $150 billion range annually in the U.S., that seems a curious position. It’s not likely that too many high-roller, volatile sports fans have been sitting on the sidelines waiting to bet outside of Nevada until the U.S. Supreme Court and then their state make the betting legal.

NBPA General Counsel Clarence Nesbitt, meanwhile, took offense at an earlier comment made in Springfield by Vic Salerno, the Vegas bookmaker whose company launched sports betting at a New Mexico tribal casino just a day earlier. Salerno said that during the NBA Finals in June, LeBron James injured his hand, but that the information was not made public until after the series was over. “Where’s the integrity there?” asked Salerno, noting that neither bettors nor the sportsbook operators were aware of the situation.

But Nesbitt said Salerno is not automatically “entitled” to such data, and that James elected to keep the news from his opponent. The union officials say they are very concerned that an increasingly sophisticated amount of medical and physical data is now being collected by franchises.

In the nation’s capital, the discussion had a unique flavor because the city has no casinos or racetracks. That’s why mobile sports betting dominated the discussion.

“We should act before our neighboring districts in Maryland and Virginia,” said city council member Jack Evans, who ran the hearing of the Committee on Finance and Revenue.

Because hundreds of thousands of workers commute into the city on weekdays, Evans said an early jump could condition those who would gamble to simply make their bets in the city.

“Why do I have an Uber app on my phone but not Lyft?” Evans said. “Well, Uber got to me first, and it works fine. I have no reason to change.”

Evans, echoing Lang of Illinois, scoffed at Pennsylvania’s high tax rate — and added the same observation about Rhode Island, where the state is poised to keep a whopping 51% of net revenue.

The D.C. lawmakers seem pretty far along, and they’ve proposed a plan for what to do with the sports betting revenue: Half of it goes to boost education and care for children age 3 and under, the other half goes to “the arts.”

Keith Whyte, executive director of the National Council on Problem Gambling — a regular at sports betting legalization hearings — suggested that perhaps 1% of “all gambling revenues” could be dedicated to limiting the amount and the extent of damaging impact that stems from compulsive gambling.

MGM Resorts executive Scott Butera, asked about the NFL’s relative silence on sports betting in this new era, said that it’s possible that NFL teams may move forward individually before the league as a whole does (the Dallas Cowboys recently cut a deal with WinStar World Casino Resort of Oklahoma to be the first team to have an official casino sponsor).

Evans wrapped up the meeting by saying that the official record period lasts until November 1, at which point he hopes to have a deal finalized.

“I hope to have the bill passed and on the mayor’s desk by the end of the year,” Evans said.

Then would come a “30-day layover period” during which Congress could — but Evans suggested wouldn’t — kill the bill if it chooses. Evans and a city lottery executive each estimated that it would take another four to six months to ensure safeguards and put technical logistics in place.

So, bottom line: D.C. residents may be able to legally bet on their Washington Redskins in time for opening day next fall.