Sports betting in Illinois never had a chance to take off as the impact of the coronavirus shut down the state's two sportsbooks. 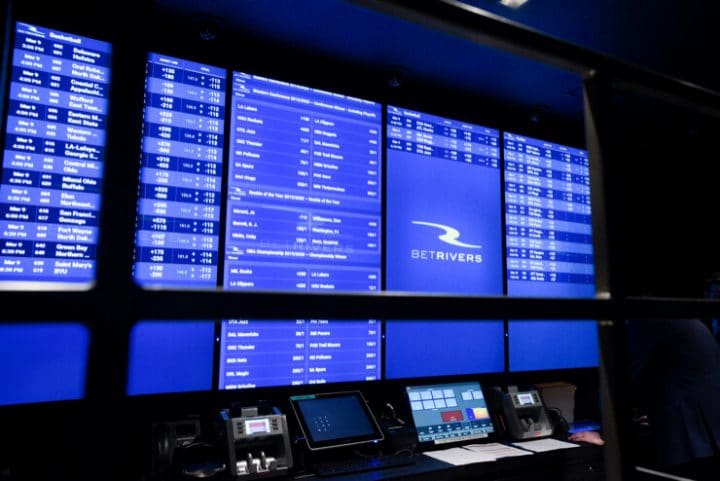 It was all there and ready to go.

One one side of Illinois, Rivers Casino had its grand opening of the BetRivers Sportsbook, complete with local Chicago Blackhawks legend Eddie Olczyk making the ceremonial first bet. Rush Street Gaming chairman Neil Bluhm had a twinkle of pride in his eyes noting how sports betting was now finally available some 12 years after getting the original license for his casino on the outskirts of Chicago — the third-largest city in the country — and right next to O’Hare International Airport.

On the other side of the Land of Lincoln, set for its own high-profile opening that would have happened Monday, March 16, was the Argosy Casino in Alton. In close proximity to a major metropolitan market of its own in St. Louis, former Cardinals great and Hall of Famer Ozzie Smith was tabbed to make the first bet. The Argosy, operated by Penn National Gaming, likely would have been a genuine curiosity for sports bettors given Penn’s 36% purchase stake of Barstool Sports in late January.

The two casinos were set for the biggest prolonged period of betting during the sports calendar year with college basketball’s March Madness as the lead-in to the NBA and NHL playoffs and the Major League Baseball regular season starting, with fan bases extremely loyal to the teams of their respective markets. Illinois had become the 15th state to accept legal sports wagers, and many viewed it as a sleeping giant given its size and potential to tap the Chicago market.

And just as fast, it was taken away by the coronavirus. As COVID-19 grew to become a pandemic and self-isolation and social distancing became prevalent and necessitated, sports schedules across the United States were canceled. The result: a pair of new sportsbooks with little more than blank game schedules on large screens, unmanned teller stations, and idle self-serve kiosks. By Friday, the Illinois Gaming Board issued an order to suspend all gambling operations for 14 days from March 16-30.

What’s next, as is the case for much of the country, is anyone’s guess.

Illinois Gaming Board pushes back meeting

Unsurprisingly, both the Illinois Gaming Board and the Illinois Racing Board postponed their regularly scheduled meetings for this month. In the case of the IGB, it was for Thursday, March 12, while the IRB had one slated for Tuesday, March 17.

In terms of paperwork regarding sports betting, the IGB does not have many items to address, according to its website that provides updates on the applications of potential licensees. In addition to Rivers Casino and the Argosy, the Hollywood Casinos in Aurora and Joliet as well as the Elgin Riverboat Resort that runs Grand Victoria Casino have all been approved for temporary operating permits. Those three casinos, though, have not been approved to accept wagers.

Two others have “applicant” status: Fairmount Park in Collinsville and Par-A-Dice Gaming Corporation in Peoria. Fairmount Park is the first of the three racetracks in Illinois to apply for a sports betting license, though FanDuel Group is reportedly in negotiations to buy the track to bypass the 18-month “penalty box” provision that was part of the gaming expansion bill signed into law last June by Illinois Governor J.B. Pritzker.

To that end, Betfair Interactive is listed as an applicant as a Management Services Provider doing business as FanDuel Sportsbook. Penn Sports Interactive is also currently listed as an “applicant” on the IGB website, while Rush Street Interactive received its temporary operating permit Feb. 21.

The state’s Joint Committee on Administrative Rules is expected to take up the IGB’s Phase 2 rules package at its next meeting, which was pushed back to March 31.

Illinois Racing Board in process of restaffing

The IRB cited a lack of agenda items in postponing its March 17 meeting, but it was also the second consecutive monthly meeting to be postponed. The state’s racing board recently had three members, including Chairman Jeff Brincat, resign due to campaign contributions — something made illegal with the gaming bill passed last summer.

The three resignations left the IRB with only five members, which was one short of being able to have a quorum. Pritzker addressed that earlier this month with the naming of Charles MacKelvie to the board pending confirmation by the Illinois Senate.

The IRB is also waiting on an agreement between Arlington Race Park and the Illinois Thoroughbred Horseman’s Association for the upcoming racing season that was scheduled to begin May 1. The two sides are at an impasse regarding the size of the overnight purses, with Arlington Race Park offering slightly more than $140,000 per day and the ITHA wanting $200,000 per day.

On March 1, the IRB could have appointed a mediator for the two sides, but with the resignations of Brincat, Greg Sronce, and Edgar Ramirez, it is uncertain if the board does have a mediator in place.

The negotiations have also been exacerbated by the state’s recapture policy and the decision by Churchill Downs Incorporated, which owns Arlington Park, not to pursue a racino license. CDI made that surprising decision last August, citing high tax rates, and has not committed to live racing beyond 2021.