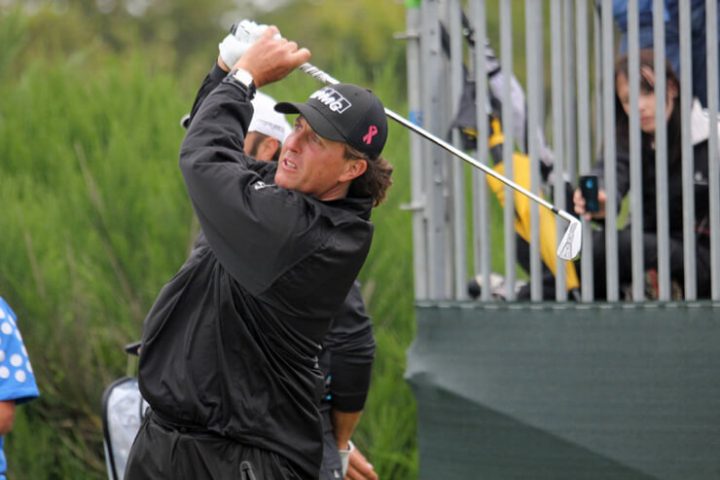 Tiger Woods has a bit of a personal history with attention-grabbing events on Thanksgiving weekend.

This year, golf’s biggest superstar is hoping to rewrite the narrative and make Turkey Day weekend about what he does best. Woods and Phil Mickelson, the second-biggest star on the links for much of the Tiger era, have a proposed winner-take-all $10 million head-to-head match in the works for either November 23 or 24 at Shadow Creek Golf Course in Las Vegas.

Today, the fourth of four 2018 golf majors begins at Bellerive Country Club, and make no mistake, Tiger vs. Phil is not a major. It doesn’t really count.

And it’s a built-for-betting bonanza.

Even though the match isn’t a done deal yet, the Westgate Las Vegas Superbook is already taking bets:

Who else is pumped?!?!?! pic.twitter.com/FA2UYm2zHj

Offshore books have posted a line as well, with the disclaimer that the match must take place in 2018 for the bets to count.

It makes sense that Tiger is the favorite; not only is he a little hotter coming off his tied-for-sixth-place finish at the British Open (“Lefty” finished four strokes behind him, tied for 24th), but Woods is the “public team” here. He’s the Green Bay Packers or the New York Yankees. Even before he started resembling the Tiger of old again this year, when he was broken down and barely inactive in recent years, bettors would’ve probably rallied behind him over Mickelson at even money.

Consider: At MGM’s sports books, Woods opened at 20/1 for this week’s PGA Championship and quickly got bet down to a co-favorite with Dustin Johnson and Rory McIlroy at 10/1. That tells you everything you need to know about how Vegas needs to skew lines to account for Tiger fandom.

Prop ’til you drop

Moving beyond the straight-forward “who will win?” question, there is the potential for prop bets galore on Woods vs. Mickelson. The following are already being discussed as options in various corners of the internet:

Golf and betting go hand-in-hand — it’s one of the few sports in which, at the recreational level, competitors frequently make bets on themselves while playing. If indeed Tiger vs. Phil comes off on Thanksgiving weekend (and insiders expect that it will, though you never know until there’s an official announcement), it should attract tons of action.

Betting against a record-setting day

As perfect as Tiger vs. Phil seems for inspiring betting, speculation that this could be the biggest golf-betting festival ever, or even that it will rival the handle on golf’s majors, is probably a reach.

“It won’t be anywhere near the handle of a golf major,” Dan Daly, a golf writer for VegasInsider.com, tells USBets. Despite the proposed $10 million for the winner, “people feel like it’s an exhibition, which it essentially is, and that scares people away. It’s the same reason an NFL playoff game generates so much more action than the Pro Bowl. If Tiger and Phil were to put their own money up and had a vested interest in the match rather than a mere high-stakes exhibition, I think that would make it a lot more attractive for people. People will definitely tune in to watch, but I don’t think it holds near the interest it would have 10 years or so ago.”

That’s a key point: At 42 and 48, respectively, Woods and Mickelson, neither of whom has captured a major in the last five years, are not in their primes. There’s a distinct whiff of Kareem vs. Dr. J to this.

Also, part of the fun of betting on a golf major is identifying a 100/1 long shot on whom you can win life-changing money without risking life-changing money. With a -150 favorite taking on a +130 underdog, that’s not an option here. As Daly points out, when Floyd Mayweather and Conor McGregor attracted massive betting volume a year ago, that was partially fueled by the fact that MMA fans could have some fun throwing away money on McGregor at odds in the +500 range. There’s no such heavy underdog to latch onto in Woods vs. Mickelson.

Also limiting the action is the timing. A November golf event can’t corner the market on sports eyeballs the way a major in the dead of summer can.

“They are having the event on a weekend with college football, NFL, and the beginning of NCAA basketball,” Daly notes. “If I were them, I would’ve waited until mid-December, when NFL stops the Thursday night games and there is a break in bowl games.”

A twist at your fingertips

Tiger Woods vs. Phil Mickelson is not going to be the Super Bowl of golf betting.

That said, as mobile sports betting spreads over the next few months, Tiger vs. Phil might be the perfect storm for taking in-game betting to the next level. If viewers can bet from hole to hole — the same way they would against their friends if they were actually on the golf course themselves — this head-to-head golf event creates a formula that’s hard to resist.

But whatever your preference — winner bets, props, or in-game action — this much is clear: Tiger vs. Phil will give sports bettors a little something extra to be thankful for this November.

Tiger Woods Drives Interest In Golf And The PGA Tour, Why Not DFS?