Zero To 60: Sports Betting Preview For The Small-Sample-Size MLB Season

There are new rules, no home crowds, and only 60 games to sort things out as sports bettors welcome back the first mainstream team sport. 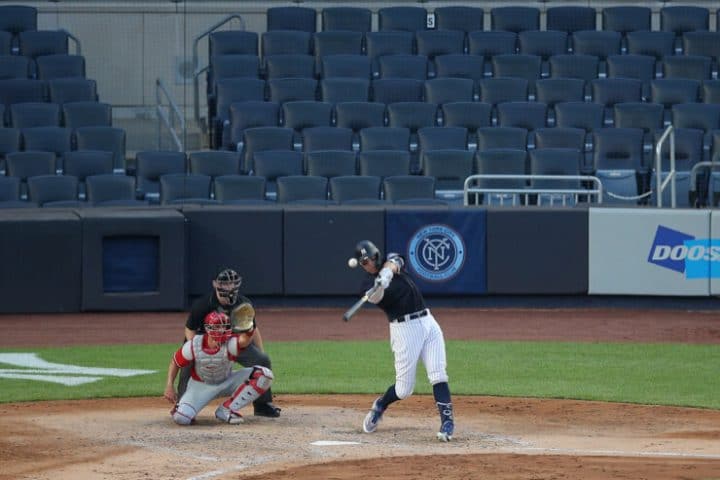 We had to wait until late July, but the boys of summer have finally arrived.

They’ll be wearing facial coverings at times, they won’t be spitting out sunflower seeds, none of the pitchers will be hitting, and the players’ movements will be accompanied by synthetic crowd audio used in the MLB The Show video game. It’s not the baseball we’re used to. But it’s baseball. It’s real MLB games. Games that count in the standings.

Games that you can bet on.

Table tennis, Belarusian soccer, and, in some states, hot dog eating all had their moments in the sports betting sun, but now America’s true national pastime — betting money on players and teams we’ve heard of — is back.

Statistical models and projections are always key factors in getting the better of the sportsbooks when wagering on baseball, but for the 60-game 2020 season that begins for four teams on Thursday and for the other 26 on Friday, beating the books requires more than that. Success will involve accounting for the variance that comes with teams only playing 37% of a regular season, watching the COVID reports right along with the injury reports, and factoring in new rules and empty ballparks.

You want to win betting on MLB in 2020? Well, you’d better be able to hit curveballs.

There are numerous ways in which new circumstances or rules could impact wagering decisions this season, and here are four of the most pronounced:

Whereas the NBA has (more or less) sealed its bubble and might just manage to make its corner of the Disney complex a COVID-free zone, MLB players will be traveling from city to city and interacting between games with family and friends. So there’s every reason to predict some of them will contract the virus. For bettors, that means scrutinizing the injury news and release of starting lineups every afternoon will be a new adventure.

One unique aspect of baseball betting is that, traditionally, sportsbooks can make wagers conditional on one or both scheduled starting pitchers making it to the mound. But in anticipation of frequent late scratches among hurlers, some books are closing that road to voided bets for the 2020 season.

No home crowds as part of home-field advantage

The home team still bats last. So home-field advantage is not dead. But it will certainly be dulled this season.

And it’s not that huge to begin with. On average, home teams in MLB score 0.15 more runs per game than road teams and, historically, they win 54% of the time, which is the lowest of the four major American team sports. (NBA is tops at 60%, making its neutral-court restart particularly intriguing.)

Do those small edges diminish without fans cheering? We’re about to find out. But it seems a reasonable position for bettors to back road teams if sportsbooks appear to be skewing lines in the home teams’ favor. (For what it’s worth, the Yankees are road favorites in Thursday’s opener against the defending champion Nationals.)

The DH comes to the NL

Old-school National League fans aren’t happy about it, but pitchers won’t have a spot in the batting order this season — and might never again. So in theory, run totals on NL games should be right on par with where they are on AL games.

And of course, the same goes for interleague games, which make up one-third of the schedule in this bizarre season.

This is a fascinating one. Once regular-season games reach the 10th inning, every frame begins with a runner on second base. The goal here is to get games over with ASAP and reduce risk of an 18-inning, eight-hour marathon.

How often should bettors expect this rule change to be relevant?

In case you're interested for the new MLB rule…

It is logical to conclude that the new rule will make run totals higher because of the frequency with which each team will score one run in the extra inning, then come out for another inning, and possibly repeat the process. Think of a toned-down version of what happens when college football games go to overtime; a game with an over/under of 47.5 can be knotted at 14-14 and still hit the over. In MLB this year, the games in which three or more runs are scored in extra innings figure to become more common.

The favorites and the longshots

Getting rich betting sports futures is often a matter of nailing a longshot pick. They can’t all be Leicester City at 5000/1, but if you grabbed the Nats at the right time last year, you cashed in.

And in a pandemic-shortened season, without the traditional 162 games to separate the contenders from the pretenders, chances are a mediocre team or two will still be playing in October. And like in the NHL, the goal for baseball teams is just to get into the postseason, because once you’re there, anything can happen.

That said, there are two obvious favorites this season: the Los Angeles Dodgers and the New York Yankees. Both made splashy offseason moves to upgrade teams that were already sure to contend. Given the crap-shoot-y nature of the season ahead of us, there probably isn’t much value in either chalk pick. But here’s a look at the championship odds for both at legal sportsbooks around the country:

The next-shortest odds belong to the Houston Astros, generally around +800. And from there it falls steeply to the +1400 range. There is a clear separation between the two favorites and everybody else.

And that might make this a perfect season for longshot flyers, whether to win the World Series or just to get there. The Cincinnati Reds, available at 25/1 at several books, are a popular longshot. In the NL Central, both the Cardinals and Cubs have shorter odds to win the division, but at DraftKings Sportsbook, 42% of the bets and 58% of the handle through Tuesday was on Cincy.

(By the way, if you’re a believer in the Reds, who have a relatively easy schedule based on their opponents’ 2019 winning percentages, banging the over on their win total of 31.5 is an alternate approach to cashing in on them without needing a deep postseason run.)

The Chicago White Sox are a similarly popular “sleeper” (except they’re not a sleeper if everyone is betting on them) in the AL Central. According to DK, 36% of the bets and 55% of the handle on AL Central bets are coming in on the +325 on the Sox, who vary from +2400 (DK) to +3300 (FanDuel Sportsbook) to win the championship.

Another popular semi-longshot pick: the Tampa Bay Rays, at as high as +2000 to win the World Series. The Yankees are the obvious choice to win the AL East on paper, but in a 60-game season, it’s so easy for that paper to get crumpled up.

Looking for something a little longer? The Brewers at 35/1 and the Diamondbacks at 45/1 both have some if-everything-breaks-right friskiness about them.

Before the deluge of games on Friday, bettors will be able to dip their toes in with two Thursday games: a marquee East Coast game at 7:08 p.m. in D.C., and a not-quite-as-marquee West Coast game starting three hours later in LA.

The baseball season begins with a fantastic pitcher’s duel, as the Yankees’ newly acquired Gerrit Cole takes the mound against the Nats’ Max Scherzer — each of them top five in their respective leagues’ Cy Young voting both of the last two years. Washington is as high as a +123 ’dog, while the best moneyline price we’re seeing on the visiting Yankees is -138. But those lines are constantly moving, and have been since they went up.

The second game of the evening is more of a mismatch, with the mighty Dodgers, behind Clayton Kershaw, taking on a San Francisco Giants team that is widely expected to mail in the abbreviated season. The Dodgers have a win total of 37.5 and the action has come in heavier on the over; the Giants’ total is set at 25.5 and bettors have pounded the under.

Not surprisingly, the books see LA as a huge favorite on Thursday. You can get +260 on a Giants victory or pay -295 to root for Kershaw and company to get the job done.

The #BlueJays playing in PNC Park could have the rare effect of hurting both hitters' *and* pitchers' fantasy value. Massive HR drop-off, but small one for run-scoring. The ERA gain may be offset by pitchers getting fewer Ks. pic.twitter.com/kZEPPOmqEk

The sportsbooks are doing their best to make this a great time to be a sports bettor. As they should, considering how consistently brutal the last four months have been for bettors.