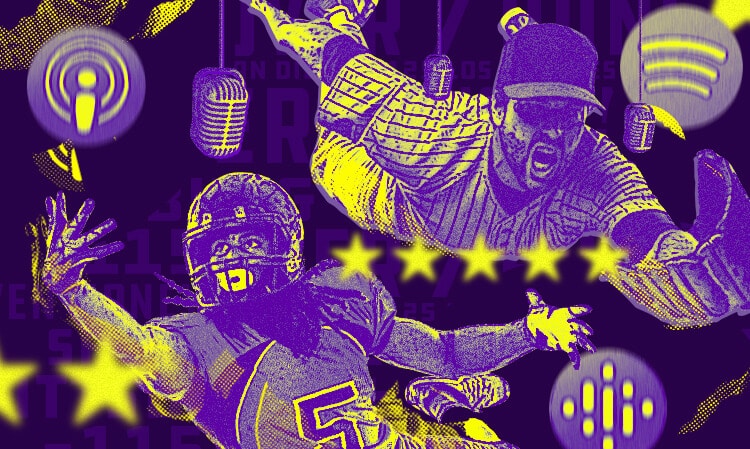 Yeah, yeah, we’re only three installments into this “sports gambling podcast review” series, and already we’re reviewing a podcast that isn’t about sports gambling. But … some people consider poker a sport, right? And poker is, like sports betting, most definitely a form of skill-based gambling.

So with the World Series of Poker in full swing and its Main Event set to start this weekend and potentially set the all-time record for entries, it seems a reasonable time to bend the rules slightly and review DAT Poker Podcast.

The show’s name is derived from the first names of the three hosts: Daniel, Adam, and Terrence.

Daniel is Daniel “Kid Poker” Negreanu, the six-time WSOP bracelet winner, two-time WSOP Player of the Year, and 2014 inductee of the Poker Hall of Fame. Adam is Adam Schwartz, who describes himself on Twitter as a “part time poker podcaster” and “part time poker player.” Terrence is Terrence Chan, a poker player and occasional MMA fighter who has made six WSOP final tables over the years but hasn’t quite snagged a bracelet.

The balancing act among the three Canadian hosts (as well as producer Ross Henry, who chimes in at times) is a delicate one, given that one of the hosts has the other two covered, with mountains of chips to spare, in terms of star power. But when they do strike that balance, this podcast reliably hums.

Dan’s the man, most of the time

The podcast has a structure, but it’s a loose one, with Schwartz typically steering the show and playing point guard while setting up Chan and, especially, Negreanu to share their insights. They’ll cover the notable poker news since the previous podcast, delve into some hand analysis, and chat about their personal lives, and they finish most episodes by playing a series of listener voicemails and responding to them.

DAT Poker Podcast does veer into sports betting talk at times, but it’s certainly not a central focus. All three hosts are hockey fans — Negreanu played a role in helping bring what would become the NHL’s Golden Knights to his adopted hometown of Las Vegas a few years back — and they tend to talk with some frequency about NHL bets or fantasy hockey, along with occasional MMA discussions.

But for the most part, the conversation centers on poker. And it especially focuses on what Negreanu has to say about the game in which he makes his living.

Kid Poker’s combination of quick wit, eloquence, charisma, and elite poker-playing ability has made him arguably the game’s top ambassador over the past 20 years or so. So it’s no surprise that the podcast often becomes “The Daniel Negreanu Show, Featuring Occasional Interruptions By The Other Guys.” With no disrespect whatsoever meant toward Schwartz or Chan, most listeners are tuning in primarily to hear what Negreanu has to say, and he’s the reason this isn’t just another poker pod with a modest audience.

Negreanu is to this podcast what Charles Barkley is to Inside the NBA. But that NBA studio show works best when Ernie Johnson, Kenny Smith, and Shaquille O’Neal are all playing important supporting roles. Often, Schwartz and Chan find those sweet spots. Occasionally, it becomes all Negreanu, with his co-hosts proving too deferential.

Back to the glass-half-empty side of things: Negreanu has been given too much free rein to promote his sponsor, GG Poker, a site operating legally in some countries but not available legally in the U.S. When Daniel starts going into detailed breakdowns of GG’s recent games and upcoming events, it’s time to start tapping the fast-forward button, particularly for U.S.-based listeners.

DAT doesn’t often bring on guests for interviews, but the hosts are able to pull in noteworthy names when desired.

For example, on the most recent episode, with Negreanu unavailable due to his WSOP playing schedule, Chan and Schwartz invited well-known music producer and two-time WSOP bracelet winner Steve Albini for a lengthy interview. To make Episode No. 100 special, Negreanu scored the boys a sit-down with the notoriously media-reluctant Phil Ivey. At the conclusion of Negreanu’s contentious, high-profile heads-up challenge against Doug Polk, the show welcomed Polk to break it all down.

With or without interviews, additional voices are heard on the podcast nearly every episode, thanks to the voicemail segment. These nearly always entertain, as listeners share their own tales from the poker table, ask questions of the hosts (usually Negreanu), and drop inside references for the regulars. The voicemail segment is the comfort food that leaves the audience satisfied when the hosts sign off for the week.

DAT Poker Podcast drops new episodes sporadically, averaging two per month of late. (When it launched in 2018, new episodes dropped weekly.) Most episodes are between 60 and 90 minutes in length.