While the UK is making moves to ban the practice, it's just getting started in the U.S. 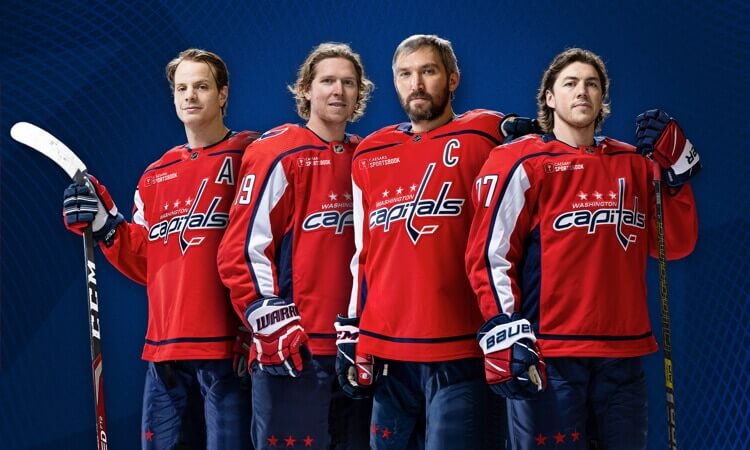 But there are a growing number of differences, and perhaps the most glaring and obvious one is happening right now. While the UK is moving toward banning gambling advertisements on the jerseys of players, the American market is just now expanding into that realm with the Washington Capitals of the NHL being the first to sign a deal. Starting in the 2022-23 season, the Capitals will feature a 3-by-3.5-inch patch advertising Caesars Sportsbook on the upper right chest area of the jerseys.

Meanwhile, in England, English Premier League teams — and all other professional sports teams — will almost certainly be without gambing ads on their uniforms come the 2022-23 season, assuming the government gets its way. Politicians in the UK are currently hashing out final proposals to eliminate the practice. It’s estimated some $80 million in sponsorship money will go down in flames as a result.

Meanwhile, Spain has already banned all professional soccer teams from having any gambling sponsorships, and Italy has gone ahead and completely banned gambling advertising.

Of course, here in the colonies, sports betting advertising is about as ubiquitous as columnists using the word ubiquitous in an effort to sound smart. Barely a day goes by that a league or a team doesn’t announce a new sponsorship deal with a sportsbook.

And now, the patches are here.

“The irony and frustration here is not lost on me,” said Brianne Doura-Schawol, vice president of U.S. policy and strategic development for Epic Risk Management. “As the U.S. begins to announce its first ever shirt sponsorships, we’re simultaneously seeing countries like Spain and possibly the UK that are banning this form of advertisement. Why are they banning it? A result of the harm that has come from it. May I ask, why does the industry feel we’d be any different and not suffer the same harm as the other countries?”

It’s a fair point, and one Doura-Schawol doesn’t think is being paid attention to by any of the stakeholders.

“We need to be considering the sheer amount of advertising, how it’s being done, and who is consuming it,” she said. “Sports are enjoyed by an array of folks, youths included, also a great number of people who could be considered vulnerable and at-risk. I fear that we are normalizing gambling so rapidly and the saturation of advertising — now even on jerseys — is just too much.

“I am not against the expansion of legalized sports wagering or any form of legalized gambling. I am, however, against doing this without proper safeguards. It would seem to me that the allure of dollars in this nascent market is proving to be more worthy than that of the human lives that could suffer harm from some of these decisions. I hope the industry at-large does better to collaborate and have open dialogue around these issues.”

As far as those dollars are concerned? The NHL is more than happy to pocket them.

“We honestly believe that the overall program is worth hundreds of millions of dollars on a yearly basis. This is big,” said Keith Wachtel, the NHL’s chief business officer and senior executive vice president, according to an ESPN article.

First look at advertising on umpire attire in MLB. Via @sportslogosnet pic.twitter.com/LDsb1zU76Z

As for the NBA? It has been accepting jersey sponsors since the 2017-2018 season, but with gambling ads specifically prohibited. Of course, that rule was put in place pre-PASPA, and it would seem it’s only a matter of time before the NBA relaxes it.

As for me? I’m doing a wee bit of pearl clutching. I’m generally fine, in an American-don’t tread on me-libertarian-lite sorta way when it comes to advertising. And while sports betting and online casino gaming aren’t exactly the same as Ivory soap and Bounty quicker picker uppers, let’s not fool ourselves: As long as we’re more-or-less OK with alcohol advertising — and for that matter, McDonald’s and Doritos advertising — then it seems awfully silly to get ourselves all worked up about gambling advertising.

But ads on uniforms seem a little much. The athletes themselves, while obviously the source of our wagering enjoyment, are still out there playing a game. And while it’s one thing to have in-stadium advertising (and in-stadium sportsbooks), slapping ads on the players themselves feels a little too … connected.

As adults who bet on sports, we’ve long stopped rooting for the “laundry” on the field, court, or ice. We root for whoever we bet on. Right, wrong, or indifferent, that’s the way it is. I’d sell my beloved New York Mets down the river if it meant I was cashing a ticket.

But for non-gamblers — and specifically, kids — sports stars still float in rarefied air. They’re beloved. And while it’s one thing to bombard these people with sports betting ads during the game — again, I’m fine enough with it — putting the ads on the uniforms, making them part of the action, basically using the players as vessels for advertising … it’s a little icky.

This is something that has obviously been discussed in the British gaming market — as well as other European countries — and is now being phased out as a result.

Right now, the American and European gambling markets are like those two dogs in the painting in Goodfellas: One dog goes one way and the other dog goes the other way.

Of course, at the end of that scene, you hear the presumed dead body of Billy Batts thumping away in the trunk, and if there’s a metaphor there, it probably won’t rear its head for another decade or two stateside when, and if, the federal government decides to step into the space like its European counterparts.