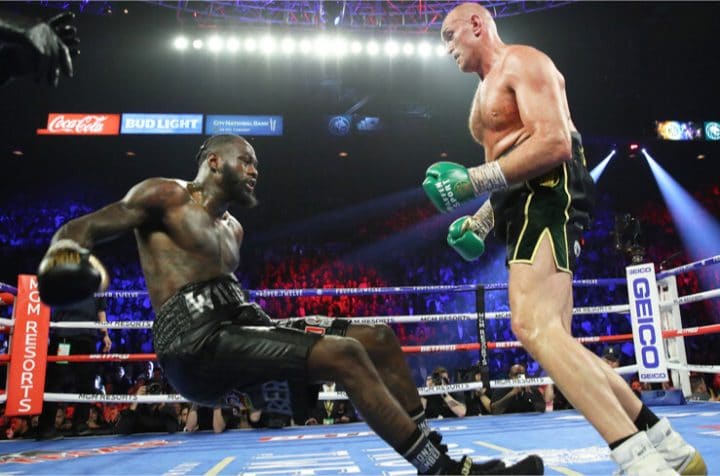 Trainer Mark Breland — yes, that Mark Breland, for those of you who watched the 1984 Olympics — showed mercy in throwing in the towel in the seventh round at the MGM Grand on Saturday night, when his fighter, Deontay Wilder, was out of answers and taking a pounding at the hands of Tyson Fury.

Sports bettors who put their money on Wilder were shown no such mercy.

As MGM Resorts Director of Trading Operations Jeff Stoneback told US Bets last Tuesday, the host casino was receiving twice as many bets and twice as much money on Wilder as on Fury, and a heavyweight championship fight that had opened with Fury as a slight favorite closed with Wilder a clear favorite at most books — including as high as -150 at the Westgate Superbook in Las Vegas.

Stoneback was up front about the sportsbook’s needs on the day of the fight:

ICYMI: Per @BetMGM’s Jeff Stoneback on #WilderFury2: Best-case scenario is Fury by decision. Worst case is Wilder KO before end of 11th round, mid-6-figure loss. And: “Wilder by knockout in first or second round would be disastrous.” @Covers https://t.co/NJi1Z83N3D

The one-sided action on the Wilder side was not limited to Vegas. PointsBet, which operates online books in New Jersey and Iowa, sent out a press email on Saturday afternoon declaring bluntly, “Book is really rooting for Fury.” Nick Bogdanovich of William Hill US told Patrick Everson, “We need Fury big.”

The ultimate result was the 6’9” British “Gypsy King” winning by seventh-round TKO, with Wilder suffering his first loss and the first two knockdowns of his pro career along the way. All the bets on Wilder, on Wilder by KO, on Wilder by decision, on Wilder in a specific round or range of rounds, on a repeat of their draw from 2018, or on Fury by decision — seemingly the more likely route by which Fury would win if he did win — were losers.

Bettors were wild about Wilder

The story was the same wherever you looked, as the maxim that “everybody loves a puncher” held true. Five of the first six bets of $10,000 or more at MGM were on Wilder. PointsBet said there was “minimal sharp action” on the fight, but they “did see a couple sharps get on Wilder at -110 before the price started to drift out.”

In terms of straight moneyline bets, 74% of the bets and 88% of the handle at PB were on “The Bronze Bomber” from Alabama. In markets where bettors could choose a specific outcome, only 12% of bets were on the Fury KO/TKO/DQ option at +400.

DraftKings Sportsbook saw similar trends, with 75% of both bets and handle on Wilder and 18% of bets and 13% of handle on Fury by KO, TKO, or DQ.

At FanDuel Sportsbook, it was 72% of bets and 86% of money on Wilder, with 13% of the method-of-victory handle landing on Fury inside the distance.

FanDuel also had an “exact method of victory” prop where you didn’t need to identify the winning fighter but you did have to get specific about how it would end, distinguishing “KO” from “TKO.” In this case, with the white towel convincing referee Kenny Bayless to stop the fight with Wilder still on his feet, it goes into the books as a technical knockout. Only 2% of the handle at FanDuel cashed in on that.

FanDuel even won big on the over/under 10.5 rounds, as a mere 33% of betting handle was on the under.

Many of the online books offered special promos on the heavyweight title fight, and few of those worked out in the public’s favor either.

FanDuel’s “Early Exit Insurance” offered a refund, in site credit, if you took one boxer or the other to win and he lost within the first six rounds. Wilder backers missed out by 99 seconds.

DraftKings offered an odds boost to +140 on either side, but it was for a max bet of only $10 and presumably the great majority took the Wilder side (which was getting the bigger boost from the actual odds at the time).

FOX Bet had various boosts available, including Fury by decision all the way to +240 and Wilder by KO in rounds 1-6 to +400. A boosted return only helps bankrolls, of course, if the bet wins.

But more common were the stories like this one:

Fury entered the ring Saturday night to the strains of Patsy Cline’s “Crazy.” That’s exactly what you’d have to be to bet against him next time.