‘All we’re rooting for is one of the ‘dogs to win outright,’ one exec says of playoff trend 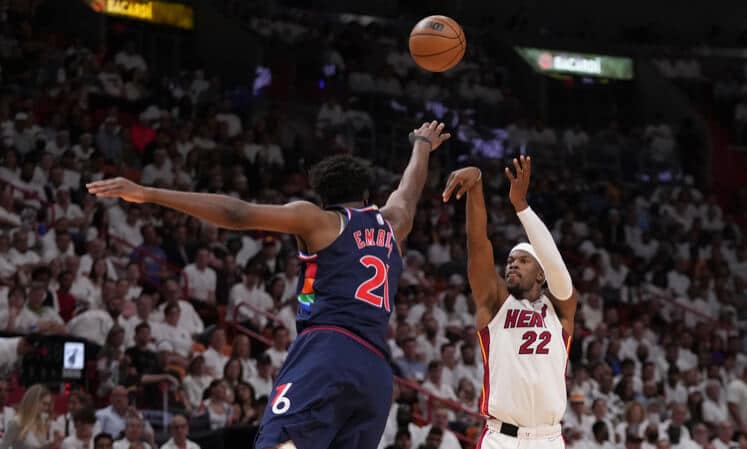 On Thursday night, standing on the brink of playoff elimination, the Philadelphia 76ers will host the one they let get away, Jimmy Butler, and his Miami Heat teammates.

Considering the career-long playoff ineptitude of both Doc Rivers and James Harden and the drubbing the Sixers took in South Florida on Tuesday, neither Philly fans nor sports bettors can be feeling especially confident about the series being extended to a decisive seventh game. But the Sixers are nevertheless a consensus favorite to prevail (-2.5 points/-140 on the moneyline at the SuperBook) in Game 6.

Hence, John Murray, executive director of sportsbook operations for Las Vegas’ Westgate SuperBook, is expecting a ton of money to come in on Philly to win straight up — if recent history holds.

“Guys are making really significant, six-figure bets on favorites’ moneylines,” said Murray, who added that such bets have also been particularly prevalent on the NHL playoffs this postseason. “They’re just nailing all the big favorites on the moneyline. I don’t recall that as much in the NBA playoffs in the past. Every night, all we’re rooting for is one of the ‘dogs to win outright. If Golden State had lost that game [Monday] night, it would have been an enormous winner for us. And Sunday night, we had a huge win when the [Edmonton] Oilers lost to the [Los Angeles] Kings.

“It’s always been like that in every sport with parlays, but what’s stood out to me in this playoff run is guys are holding their noses and doing these straight bets.”

While this hasn’t been the case at every sportsbook — it’s been business as usual at FanDuel, for instance — some books are noticing similar NBA and NHL playoff betting trends, in addition to other distinct wagering patterns.

“I can’t say I’ve seen it too consistently on the NBA side, besides the [Phoenix] Suns maybe being at least 70% of bets/handle in every game of the playoffs,” said PointsBet Media Analytics Manager Wyatt Yearout. “But on the hockey side, I have noticed very lopsided action (85-95%) on both the [Colorado] Avalanche and Oilers moneylines, and they have both been heavy favorites in games so far.”

“For the NBA and NHL playoffs thus far, we’ve seen worse margins on the favorites, as expected,” Sunny Gupta, Tipico’s U.S. sportsbook manager, told US Bets. “But for handle distribution, it has been pretty even.”

At BetRivers, which also has the Sixers favored by 2.5 points (-136 on the moneyline) over the Heat in Game 6, 68% of the sportsbook’s large wagers — defined as bets of $25,000 or more — have been on NBA games since the playoffs started on April 13. By comparison, from March 1 to April 12, just 27% of BetRivers’ large wagers were on NBA games.

Interestingly, while 78% of the large wagers during the weeks-long run-up to the NBA playoffs were on favorites, that figure has fallen to 65% in the postseason, with 13% of large wagers backing underdogs and the other 22% pointed toward over/unders or props.

Regardless of where the money’s flowed, BetRivers’ data reveals strength in numbers. To this end, NBA playoff game bets (moneyline, o/u, spread) backed by at least 75% of the public have gone 29-6 this postseason, while those backed by 80% of the public are an even more dominant 21-2.