Supreme Court Sports Betting Ruling, One Year Later: How The Impossible Came To Be

On the anniversary of the Supreme Court giving states the right to regulate sports betting, a look at 10 unlikely moments that paved the way. 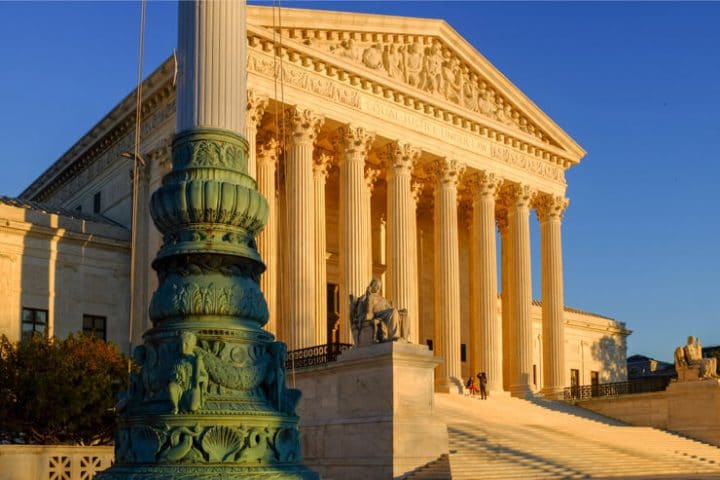 In the introduction to his new book, “Beating the Odds: The Epic Battle That Brought Legal Sports Betting Across America, former New Jersey state Senator Ray Lesniak says if bookmakers had placed odds on his quest at its origins a decade ago, it would have been “in the neighborhood of 2000 to 1.”

Considering the many unique twists, turns, and peculiarities of this saga, Lesniak’s estimate hardly seems unreasonable. As the legal, regulated sports betting community in the U.S. celebrates this week the one-year anniversary of the Supreme Court’s ruling vacating a 26-year-old federal law mostly limiting such gambling to Nevada, it’s worth looking back at some memorable quirks along the way:

1. Monopoly missed out on

If not for some political considerations, New Jersey could have had an East Coast monopoly on sports betting starting in 1993 — and it’s very likely that would mean no other states would be moving forward as they are today.

It’s little-remembered now, but when the Professional and Amateur Sports Protection Act of 1992 was passed by Congress, it included a carveout for one state: New Jersey. Lesniak and others recall U.S. Senator Robert Torricelli successfully lobbying for a one-year deadline for the state — at that time, the only one aside from Nevada that had casinos — to pass a law permitting sports betting in Atlantic City.

But 1993 happened to be a gubernatorial election year, with unpopular Democratic incumbent James Florio projected to have a tough race against Republican challenger Christie Whitman. Placing the sports betting referendum on the ballot, Lesniak says, would have led to a major advertising campaign by Atlantic City casino interests, thereby increasing turnout, which traditionally is a boost for Democrats.

So while a vote passed in the state Senate to offer the referendum, it died in a Republican-controlled House committee. (Whitman, by the way, won the election by just 1 percentage point, so the political strategy seems to have been shrewd.)

The original lawsuit had nothing to do with Governor Chris Christie. In fact, it was filed even before Christie got into office.

In 2009, Lesniak, an attorney, filed a suit along with iMEGA (The Interactive Media Entertainment and Gaming Association) and the state’s thoroughbred horsemen seeking to strike down PASPA. The suit was thrown out in March 2011, with a federal judge concluding that the plaintiffs had no “standing” to bring the case because it was New Jersey’s laws — not PASPA — that were preventing sports betting at state racetracks and Atlantic City casinos.

So only Christie could file such a suit. And Christie, a former U.S. Attorney, declined at that time.

3. The voters have their say

While that 2009 case was pending, Lesniak and state Senate President Stephen Sweeney came up with another angle: get a sports betting referendum on the November 2011 ballot. New Jersey’s Constitution leaves it up to the legislature, not the governor, to decide on ballot questions.

This one made it, but the odds still seemed to be against the state. The referendum asked voters statewide to support passage of a state law that unequivocally challenged PASPA’s existence.

As I noted to a Sports Betting on Sports America conference audience recently, it seemed highly unlikely that residents of any other state would vote so boldly to thumb their noses at a long-established federal law.

Then the vote came — and a remarkable two-thirds of voters supported the quixotic quest. Two months later, Christie, an ambitious politician who could tell which way the wind was blowing, signed a sports betting bill into law.

4. The sports leagues strike back

In August 2012, the NCAA, NFL, and three other professional sports leagues exercised their unique right granted them by PASPA to sue New Jersey to try to keep the betting from commencing.

The U.S. District Court judge who drew the case was Michael Shipp, brother of former Arizona Cardinals running back Marcel Shipp. What are the odds on that?

None of the attorneys objected to Shipp’s presence — not even after Shipp, who along with his brother grew up in a rough neighborhood in Paterson, twice sided with the leagues in stifling New Jersey’s sports betting efforts. So just put this one under the “oddities” category.

5. A losing ruling with silver linings

When the state went next to the U.S. Third Circuit Court of Appeals, it lost again — but by just a 2-1 margin from the three-judge panel. A dissenting judge found a Tenth Amendment violation by Congress in forcing the state to do its bidding in ensuring that sports betting be barred even in states like New Jersey that wanted it legalized.

Further, the judge who wrote the majority opinion concluded that it was possible for New Jersey casinos and tracks to offer sports betting — it’s just that the law that the legislature passed just wasn’t it. Judge Julio Fuentes wrote that the state had “strong arguments” that made a decision “difficult.”

6. NJ gets a green light of sorts

The next step involved the Supreme Court. In making his case to the Court in 2014, U.S. Solicitor General Don Verrilli attempted to underscore a point previously made by U.S. Attorney Paul Fishman, who said at oral argument in the case that, yes, New Jersey is free under PASPA to repeal all of its gambling prohibitions (adding that it would be a “really, really bad idea”).

The solicitor general’s office went further, writing that New Jersey was “free to repeal those prohibitions, in whole or in part.” While the Court declined to take the case, sports betting supporters in the state saw an opening — leading to Christie signing an amended bill that took away state oversight as was required by PASPA, but that left the casinos and racetracks in the state to run their own private sportsbooks if they chose.

“Christie II,” like too many sequels, seemed like a rerun in some respects. Another loss in Shipp’s court, another appeal to the Third Circuit, another 2-1 loss.

But this was no ordinary loss. Remember Judge Fuentes, who wrote the majority opinion in the first case? Incredibly, this time he cast the dissenting vote. He had left a door ajar for New Jersey in Christie I, and found that the state had successfully entered it in Christie II. But the other two judges, neither of whom participated the first time around, disagreed with Fuentes’ conclusions about his own previous opinion.

One of those judges was Marjorie Rendell, then married to former Pennsylvania Gov. Ed Rendell — the man who led the way for his state to open casinos in 2006, several of which so successfully reduced visitations to Atlantic City that it led legislators like Lesniak to start looking for ways, such as sports betting, to keep AC afloat.

The other judge was Maryanne Trump Barry. Yes, as in Donald Trump’s older sister.

The future president, who used to own several Atlantic City casinos, campaigned for a 1993 sports betting referendum in New Jersey — the one that didn’t happen, setting in motion a series of events that would leave his sister casting a tiebreaking vote 22 years later that delayed such gambling in Atlantic City for three more years.

Many efforts are made by attorneys to seek an “en banc” ruling after a Third Circuit panel defeat — that is, asking the entire Circuit bench to hear arguments.

It almost never is accepted. But, of course, it was in this one-of-a-kind case.

This one went against the state by a 9-3 margin, as once again the Circuit could not unanimously agree on this “difficult case.”

Now it was time in 2016 for one more Hail Mary: a request for a second time for a hearing by the U.S. Supreme Court.

More than 100 cases were filed at that time, and the Court chose exactly one of them to be referred to the U.S. Solicitor General’s office for review. Yes, of course it was this case.

The solicitor’s office gave the Court its analysis: Nope, no need to bother taking this case; there aren’t sufficient Constitutional issues here.

In other words, New Jersey was dead — until it wasn’t. Stunningly, in June 2017 the Court ignored the recommendation and agreed to take up the case anyway. At that point, it was (relatively) smooth sailing to a December 2017 oral argument in Washington, D.C. that left state sports betting backers giddy.

Five months later, the anticipated verdict came: PASPA was dead, and New Jersey and any other interested states could get into the sports betting business.