With Chiefs and others gone, however, sportsbooks not too worried about liability on Bengals or Rams 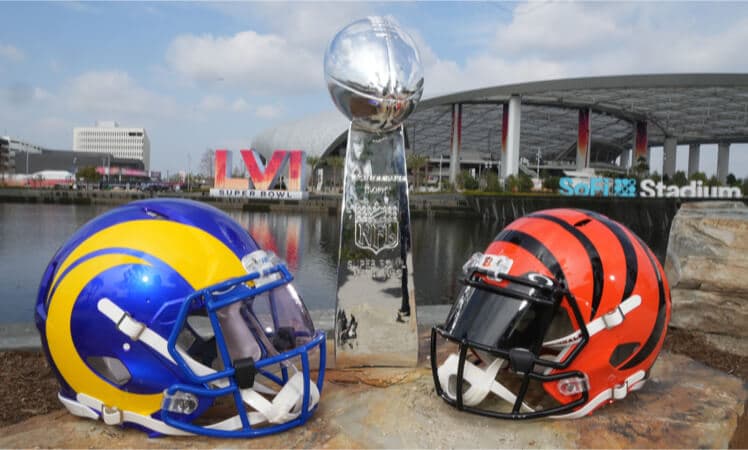 “I’ve never had anything close to this riding on a game.”

Justin Lowe, a 33-year-old from Illinois, made a bet in early September at BetMGM in Indiana on the Cincinnati Bengals to win the Super Bowl. To the amazement of almost everyone, including Lowe, here he is in February with a real decision to make.

“I’m a huge LSU fan, so instantly became a big Bengals fan since they got both [Joe] Burrow and [Ja’Marr] Chase,” Lowe told US Bets. “I just thought they were way undervalued at 150 to 1. I had a $200 free bet, and I figured, why not? I thought they could make the playoffs. But I never imagined they would go this far.”

Now Lowe has about a week and a half to decide what to do. He could let it ride, root for Cincinnati, and end up with either $30,000 or $0. He could look to sell the ticket on a site like PropSwap and lock in a low-five-figure payout and end his sweat. Or he could hedge with a bet on the favored Rams, who were -200 at BetMGM Wednesday morning but could be found at a slightly better -195 at books using Kambi’s odds, such as BetRivers and Barstool Sportsbook.

“I might put [a big bet] on the Rams risk-free,” Lowe said, referring to the sign-up offers at mobile sportsbooks that enable bettors to get their money back as site credit if their first bet loses. “That way, I hope for the Bengals to win, and if they do, I will win 30 grand and still have that [site credit] to put on another game.”

Lowe’s sharp (or lucky?) bet made about five months ago puts him in a can’t-lose situation. And the sportsbooks are, for the most part, almost as happy as Lowe to see the Bengals in the Big Game at SoFi Stadium.

“The Chiefs were the biggest liability for the book,” BetMGM’s trading team told US Bets of the two-time defending AFC champs, who surrendered an 18-point lead and lost to the Bengals on Sunday. “BetMGM had significant liability on the Chiefs, so with a Bengals-Rams matchup, the book is currently well positioned regardless of which team wins.”

Caesars Sportsbook, interestingly, was more concerned about the other conference championship game.

“The 49ers were actually our biggest liability in the Super Bowl futures market, followed by the Browns,” Caesars Senior Director of News and Content Jim Carr said. “We stand to pay out more if the Bengals win than if the Rams win, but it is not a substantial difference.”

FanDuel Sportsbook is in the opposite situation heading into Feb. 13, with more remaining liability on the Rams. But FD is generally sitting pretty based on how the playoffs have played out.

“Our biggest liability all year was on the Bills and the Bucs,” Director of Publicity Kevin Hennessy shared. “The Bills skyrocketed when New York came online. The Chiefs were a favorite for a good portion of the year, so their odds were short and manageable. We did have $132,268 on a Chiefs Super Bowl outright at +125, from a New Jersey customer.”

At BetRivers, one of the two Super Bowl teams was much more popular than the other during the season, but the liability isn’t necessarily lopsided, because the odds were so different.

Rooting for the Rams

There certainly aren’t any Rams tickets out there at 100/1 or better. The longest tickets — remember that L.A. traded for Matthew Stafford prior to Super Bowl 55, so there wasn’t much opportunity to bet the Rams to win SB 56 at longer odds based on their chances with Jared Goff under center — look similar to those held by a 38-year-old New Jersey bettor who calls himself “Moneyline Marv” and goes by the Twitter handle @MoneyLineM.

So now Marv is sitting on $200 in wagers that would win him $2,600 if the favored team — and in fact the home team, for whatever home-field advantage is worth in L.A. — wins the Super Bowl. His hedging calculations are far different than Justin Lowe’s. Marv stands to win less than one-tenth what Lowe could make. But by holding tickets on the favorite, he can hedge a relatively small amount for a decent return on the Bengals at +170 on the moneyline at DraftKings, FOX Bet, or Caesars, or he can even take the Bengals +4.5 and hope to win all wagers with a narrow Rams victory.

“As far as hedging,” Marv said, “I might do something pre-game, or see if I can get a better in-game moneyline or point spread to make a great middle.”

With all due respect to Moneyline Marv, it’s the Bengals ticketholders who have the more eye-catching stories. Cincy is the first team to reach the Super Bowl with preseason odds longer than 100/1 since the 1999 Rams (then of St. Louis, not L.A.). At some books, they opened at 200/1. Almost everywhere you looked, the Jacksonville Jaguars — who are poised to pick first in the NFL Draft for the second year in a row — were priced as less of a longshot than the Bengals.

One bettor even got the Bengals at 300/1 for $100 — and is taking a form of a hedge by offering the ticket on PropSwap, according to Luke Pergande, co-founder of the site where bet slips can be bought and sold. As far as Pergande knows, it’s the only legally made bet on Cincinnati at 300/1 odds. 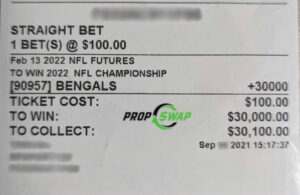 Even though the Bengals weren’t very heavily bet to win it all before or during the season relative to most other teams, every sportsbook has written some notable tickets on them. The SuperBook at Westgate Las Vegas told ESPN’s David Payne Purdum it had taken 17 bets on the Bengals at 200/1 odds, including one for $200 to win $40,000.

FanDuel is looking at one $15,000 bet on the Bengals, though that was placed heading into the Chiefs game last weekend and was only at +800 odds.

For some, of course, the Super Bowl is not about the money. It’s about fandom. Then again, sometimes the two overlap. For those long-tortured Bengals backers who bet on them every year (even those who didn’t succeed in shopping for the best price), Super Bowl Sunday could put them ahead lifetime supporting the franchise.

Took the Bengals at 67/1 odds before the season, $50 bet. I put $50 on them annually to win the Super Bowl. It’s nice to see they finally stopped going easy on the rest of the NFL LOL