Wagering on Woods to make the cut may be worth it, but bettors had best beware 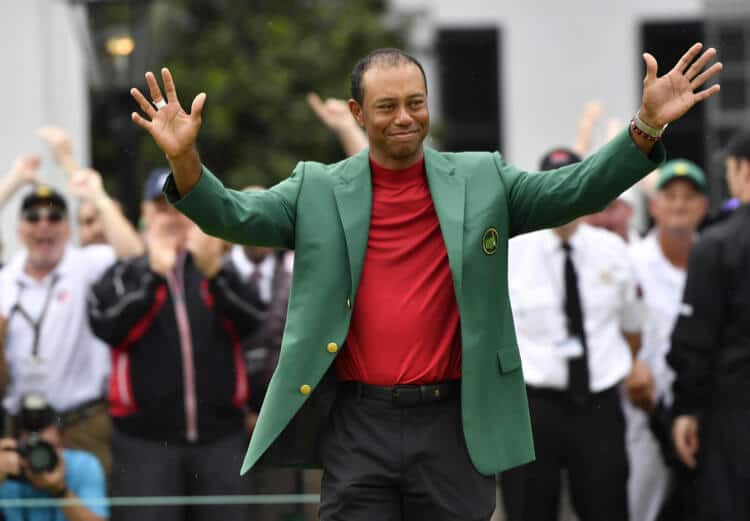 In a field filled with strapping, twentysomething lads from around the globe, the talk of the Masters, which commences Thursday at Georgia’s Augusta National Golf Club, is a balding, 46-year-old man who nearly had his right leg amputated after a grisly car accident.

That man, of course, is Tiger Woods, who announced on Tuesday that he was likely to play in this year’s Masters after a year-and-a-half layoff and a couple of promising practice rounds.

The question isn’t whether Woods can still play. The question is whether the five-time Masters champion, with a right leg resembling the rebuilt transmission of a wood-paneled Wagoneer, can walk a famously hilly 72 holes over the course of four days without literally popping a screw loose. Nevertheless, Woods’ announcement compelled most major sportsbooks to shift his odds in a manner similar to that employed by Caesars, which went from 50/1 on Woods to win outright Tuesday morning to 40/1 after he indicated he’d probably be playing.

PointsBet made the biggest move on the heels of Woods’ announcement, taking his outright odds from 80/1 on Tuesday morning to 50/1 on Wednesday morning. But for all the money that’s sure to back the legendary longshot in his quest to tie Jack Nicklaus’ record with his sixth green jacket, little of it — if any — will be of the sharp variety.

At PointsBet, there are now triple the number of bets on Tiger to win than any other golfer (15.5% of the bets).

“I was at 80/1 and was anticipating going to 60 if it was a lean to him playing,” said Jeff Sherman, assistant manager of race and sports at Westgate SuperBook. “We saw some support for him at 100, some more at 80, and anticipate some more at 60, but I’m comfortable at 60.”

What may be worth a bet is whether Woods, who’s never missed a cut at the Masters, will play well enough (or hold up long enough) to make it to the first tee on Saturday.

“My biggest bet of the week is actually Tiger to make the cut,” said Derek Farnsworth, a colleague of Van Zuiden’s at RotoGrinders (a sister network to US Bets). “I got +120 last night and it’s already down to -115 at most sportsbooks. From all accounts, it seems like he’s ready to go. At least over the first two days, he might play pretty well. It would be a story for the ages if he could come out and be in the mix on Sunday.”

As of Tuesday evening, FanDuel was offering -112 on Woods either way — to make the cut or miss it — while DraftKings was offering -115 on each side. And while the SuperBook didn’t waver on Woods’ outright odds, Sherman said the sportsbook “took some sharp play on him making the cut at +110” and responded by adjusting that line to even money while offering -120 on him missing the cut. (By Tuesday evening, the SuperBook had moved its “Tiger makes the cut” figure back to +110, while offering -130 on him missing the cut.)

Among the expected contenders, Jon Rahm is the consensus favorite, with odds ranging from 10/1 at Caesars to 12/1 at several other books, though he’s winless in eight starts this year.

“I’m probably not playing Rahm at those odds,” said Van Zuiden. “He’s been the favorite at a lot of tournaments this year. He really hasn’t showed us his A-Game for much of the spring.”

Justin Thomas, Cameron Smith, Scottie Scheffler, Brooks Koepka, Dustin Johnson, Jordan Spieth, Collin Morikawa, Rory McIlroy, and Viktor Hovland are among a group of golfers that the SuperBook has rated right behind Rahm at 20/1 or shorter.

“Someone like a Brooks Koepka at 18/1 is interesting,” said Sherman. “He’s actually been playing pretty well in the weekly events he usually doesn’t perform well in, going into a major he really values.”

Farnsworth is on the same page when it comes to Koepka.

“You just look at his track record in the majors,” said the RotoGrinders analyst. “He’s played 20 since the start of 2016 and finished in Top 5 12 times over that stretch. I’m gonna throw out his missed cut this year. He was basically playing on one leg.”

Farnsworth is also high on the prospects of former Masters champ Jordan Spieth, of whom he said, “Clearly the form is not where we’d want it to be, but that hasn’t mattered to him at all when it comes to the Masters.”

And then there’s Xander Schauffele (25/1 at the SuperBook), who’s never won a major but who finished tied for second at the 2019 Masters, which Woods won.

“I love betting on the non-winner in Xander. He’s always in contention at these things, but just hasn’t been able to close the door. But these narratives are only narratives until they’re not.”

As for the sharps, Sherman said the SuperBook has seen a fair amount of outright action on Matt Fitzpatrick (40/1), Joaquin Niemann (50/1 and a playing partner of Woods on Thursday), Russell Henley (60/1), and Si Woo Kim (80/1). But Sherman added that sharp bettors “mostly get involved with matchups and propositions where they’re not trying to beat a field of 90 golfers.”

To this end, he noted that sharps have been “fading Collin Morikawa and Adam Scott” in the matchup markets.

As can often be the case at Augusta, the field’s most formidable opponent this week may prove to be the weather, which grew so stormy on Tuesday that all practice rounds were suspended and patrons were cleared from the course. Heavy rain in the area is expected to let up by Thursday, but strong winds could continue to have an impact.

“The course is being softened with the rain that they’re getting, which is going to favor longer hitters,” said Sherman, who observed the typical betting handle for the Masters “is about double the next major, which is the U.S. Open.”

Moist fairways could make for the ideal scenario for Rory McIlroy (20/1) to pick up his first green jacket, although as Sherman noted, “It’s harder to be a longer player with a low ball flight” that grappling with heavy gusts could require.

In terms of early-round performance that could indicate a worthwhile betting option, he observed, “The thing that I look for are golfers’ approach shots into the green. Everyone talks about Augusta and the putting, [but] if we can tell who’s really clicking from the irons to the greens, I think that’s how you can tell the golfers who are going to put themselves into position to win.”