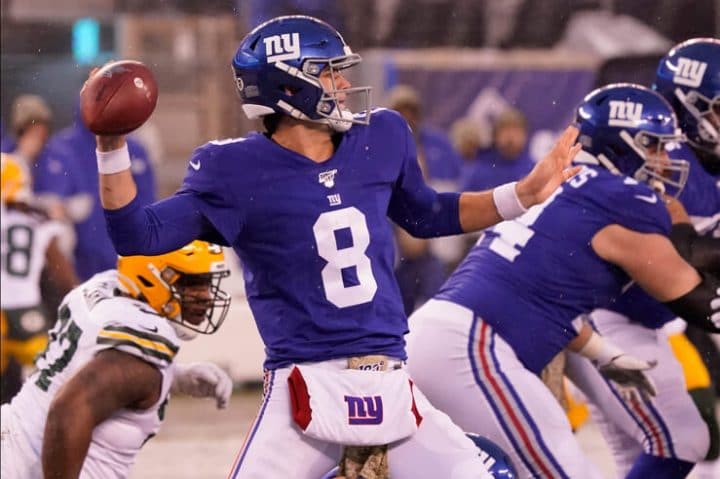 Sometimes it’s not as much about what gets said, as it is about who says it.

So it was on the “Power Lunch” segment on nationally televised CNBC on Thursday.

The New York Giants have always been known as the most traditional of NFL franchises — no cheerleaders for them, for instance, unlike with 26 out of 31 rival teams. Yet here was a Giants co-owner acknowledging that the expansion of legal, regulated sports betting in the U.S. — something the NFL, along with the NCAA, fought particularly vigorously in court for six years before losing their case — is good for business.

Asked by co-host Tyler Mathisen about the connection of the wagering to improved ratings, Jonathan Tisch replied, “That is certainly a big influence. Obviously, if you are betting on a certain game, you’re going to watch to see what happens.

“And you’re going to watch to the bitter end, because there are many games that are won on a field goal with three seconds left. And also fantasy football — when you look at how popular [sports betting] and fantasy football are, more people are staying home and watching.”

NFL ratings are up more than 5% for a second consecutive year, according to CNBC, with digital viewership up almost 50%. As Tisch pointed out, in an era of time-shifting of watching programs by consumers, “sports is the last vestige of appointment TV.”

Now, it’s important to note — as Tisch did in responding to a question about negotiations for new NFL TV contracts — that Tisch’s brother Steve, and even more so co-owner John Mara, are “really the spokespersons for the New York Giants.” Jonathan Tisch, who used to be the chairman of New York City’s official tourism agency, is less often seen publicly talking about the franchise or the league.

Still, these comments hint at even the Giants, of all franchises, warming toward sports betting more than a year after New Jersey, site of their football stadium, took its sports betting legalization battle all the way to the U.S. Supreme Court and won.

The Jets, meanwhile, who paid their half-share for construction of $1.6B MetLife Stadium, are in their second season of a deal with 888 Holdings as the official online casino of the franchise. 888 also has a legal sports betting app in New Jersey, but that aspect is not central to the partnership — yet — due to NFL rules.

Who wants to be the one to tell him?

There was an eye-opening moment in the Power Lunch segment for those of us in the business of disseminating information about the ever-changing world of legal U.S. sports betting.

Mathisen asked Tisch, “Will there come a day where I’ll be able to bet from my seat at MetLife Stadium, or bet in a kiosk that you may own? Are you getting ready for that?”

As to the first part of the question, the answer of course was August 2018, when several of the now dozen-plus legal online sports betting sites already were in operation in New Jersey in time for the NFL preseason.  (And if you include illegal offshore sportsbooks, the answer is many years before that.)

Mathisen is no cub reporter, either. He has been with the network since 1997 and holds the title of vice president for events strategy at the network, which is based in Englewood Cliffs, New Jersey — which, like MetLife Stadium, is in Bergen County.

So for him to not know this piece of information is helpful as context to the level of general consumer awareness on legal sports betting — or the lack of it. And the fact that New York State still doesn’t allow mobile sports betting only contributes to the confusion.

As for Tisch, he sidestepped the awkward part of the question and replied to the latter.

“Well, I think the NFL is getting ready for it — and the NFL, as you know, has a relationship with all 32 teams,” Tisch said. “And they work together on deciding how revenue comes into the NFL. It’s a split among the 32 franchises. So I’m sure the NFL is in constant conversations about how this is all going to unfold.”

To be fair to Mathisen, many Giants and Jets ticket buyers who would rather make an old-fashioned brick-and-mortar sports bet than on their smartphone also can be forgiven if they don’t realize that the FanDuel Sportsbook at the Meadowlands Racetrack provides free shuttle buses to and from the nearby stadium parking lot.

That fact is not advertised in the lots, which is one part of the reason track operator Jeff Gural recently asked an NFL executive at a gaming conference in Manhattan why “the NFL makes our life miserable. I’m just wondering is that going to change anytime soon, because it’s very frustrating to be next to where they’re playing football, and we have the NFL pretending that sports betting doesn’t exist.”

On that latter point, the times may yet be-a-changing, if even the Giants are willing to bring the topic to the table.