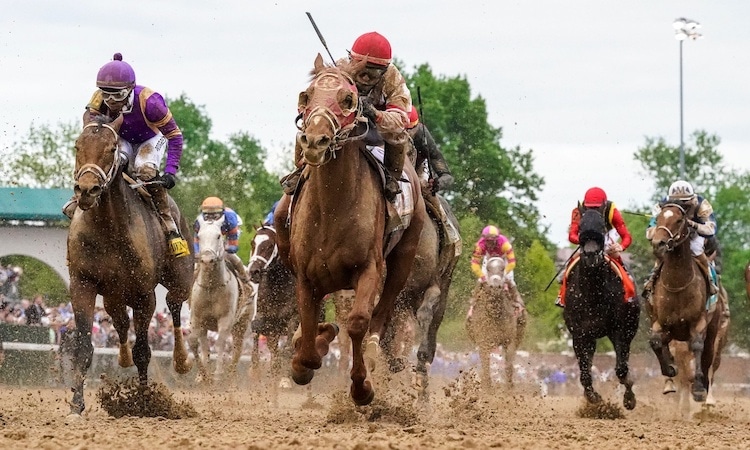 There are numerous traditions associated with the Kentucky Derby — mint juleps, extravagant hats, “My Old Kentucky Home,” and more. But for those who wager online on the first Saturday in May, another tradition is quite reliable: Get your bets in early, because at least one of the horse betting sites will crash.

On Saturday, it was TVG’s turn. The parimutuel betting operator, part of the FanDuel Group, was down or malfunctioning for two to three hours ahead of the Kentucky Derby, preventing many from getting their bets in for the big race.

The outage led to a flood of complaints and responses on social media, but this is not unfamiliar ground for TVG or any large advance-deposit wagering entity, really.

We are aware that some customers are experiencing issues with our wagering platform.

We are working to resolve the problems and apologize for the inconvenience.

Anecdotally, it feels like these issues happen each year for horse betting sites, but maybe the best way to get an accurate picture of the past is to look at customer replies from previous Derby days on social media, specifically Twitter, where horse racing has a vibrant following.

TVG has had major issues with Derby day operations multiple times over the last handful of years, including in 2020, 2019, and 2016. TwinSpires, the ADW owned by Churchill Downs Inc., has been fairly clean the last few years, but had massive issues in 2018 and 2017, when TVG even sought out several Twitter users complaining about TwinSpires to extend promotional offers to them.

XpressBet didn’t appear to have any issues Saturday, but had previous problems in 2020 and 2019. NYRA Bets had its own problems on Derby day in 2018, and there are many Twitter replies to a NYRA Bets tweet that has since been deleted.

In New Jersey, which features an ADW monopoly that could be on its way out in 2023, customers are only allowed to make online horse racing wagers through a site called 4NJBets, which is operated by TVG. So, when those customers were shut out from betting the Kentucky Derby and other races on the Saturday card for two or three hours Saturday, they had nowhere else to go, unless they wanted to make a trip to a brick-and-mortar parimutuel betting facility.

How much gaming revenue did the State of New Jersey lose today on @TVG failing on Kentucky Derby Day?

Why does this happen so often?

Good luck getting a definitive, on-the-record answer from an ADW operator as to why this happens with such regularity. TVG, in a statement Monday, said the cause was “a technical issue related to a third-party service provider,” but did not provide further detail.

“We understand and appreciate that the service interruptions we experienced Saturday were frustrating to many of our valued customers and we will be communicating directly with those affected customers over the course of the coming days,” the statement read. “TVG takes seriously its place within the racing community and the responsibility it has to deliver the very best fan experience.

“The issues our app incurred on Saturday did not meet those expectations. We have identified the cause, a technical issue related to a third-party service provider, and are actively making changes to our platform to ensure better performance moving forward.”

It’s understandable why betting companies are hesitant to talk about specific failings, but there are some indications of what causes Derby day malfunctions, according to industry sources.

I was promised “never again” in 2016 though! pic.twitter.com/6dmHtHShB5

Increased traffic plays a part, but it’s not often entirely to blame. Issues can be exacerbated by increases in deposit requests through funding vendors, who might be unprepared for the surge.

In one case, an exceedingly detailed report request threw things off. That occurred during one of the TwinSpires outages, according to a source familiar with the situation, when a particularly heavy computer bettor — using a system to make frequent wagers throughout the year at several tracks — requested all of their betting history for the year, on Derby day.

For a recreational bettor, this wouldn’t be an issue, but this particular bettor had thousands and possibly millions of wagers in the time period requested, and the request, along with other factors, brought TwinSpires to a halt. According to the source, TwinSpires now limits this report function late in the day on the first Saturday in May and takes other steps to avoid system overload.

Just how much money was lost from TVG — one of the largest two ADW operators in the country, along with TwinSpires — and the overall parimutual pools at Churchill Downs, because the ADW had service interruptions in the hours up to the biggest event on the American racing calendar?

Seasoned horseplayers would have no issue moving to a different ADW once issues arise, but more recreational players, of which there are many for a race like the Kentucky Derby, may experience difficulty. And players in New Jersey had no choice other than the TVG-operated 4NJBets.

Representatives from the New Jersey Racing Commission and the Office of the Attorney General, which oversees the commission, did not immediately respond to requests for comment Monday, and TVG declined to estimate the financial impact of its service interruptions Saturday.

Churchill Downs reported $273.8 million in all-sources handle on the Kentucky Derby day betting card and $179 million on the Derby itself, both records. On TwinSpires, $64.7 million was wagered on the Saturday card, with $44 million on the Derby, which were also records.

Would those records have been increased with TVG functioning properly in the hours ahead of the Derby? Absolutely. But, considering how frequently betting sites go down on Kentucky Derby day, it might just be expected loss for the overall parimutuel pools. And while Rich Strike’s 80/1 victory, the most shocking upset in modern Kentucky Derby history, meant that TVG’s outages and issues Saturday saved a lot of people a lot of money, that’s not really the point, is it?

I wish my TVG account crashed three hours ago.

“Again, horse racing can’t get out of its own way,” said an industry source, who added that an opportunity was lost, as the Kentucky Derby is one of the biggest customer-acquisition events of the year. “Their only job was to accept bets, and to not be able to accept bets on the biggest race of the year? You’re really just depriving people of joy. Most companies, if they did this — like if this was an airline — you would never go back there.”