The UFC announced a new gambling product that it intends to license to sportsbooks to boost demand for in-fight betting. 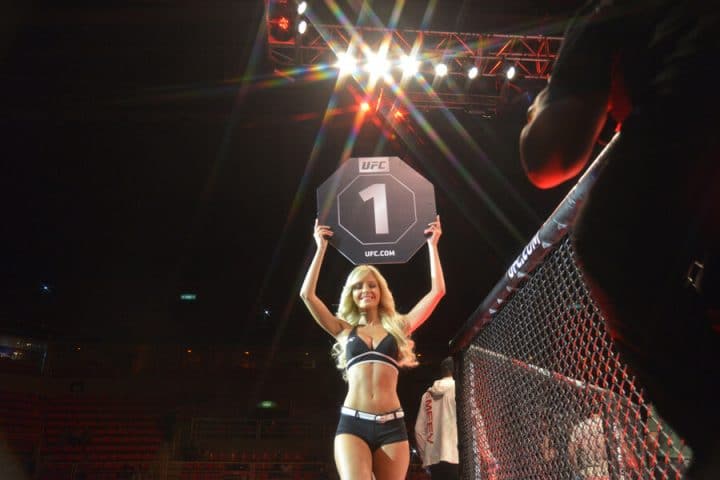 The UFC is going all in on sports gambling.

On Thursday, it was announced that the MMA promotion is launching a new in-house product called UFC Event Centre, which is in tandem with IMG Arena, according to a presser. California-based Endeavor is a majority owner of the UFC and also owns IMG Arena, a fledgling sports betting data supplier.

Access to UFC Event Centre will be sold to sports betting operators. The product will feature a slew of official UFC data, as well as multimedia materials, for the purpose of growing the market for in-fight wagering. According to Bloomberg, a mere 8% of the UFC betting handle happens in-fight.

“The UFC Event Centre and its official data feed will be a game changer for how UFC fans engage with our events through sportsbooks and gaming operators,” UFC President Dana White said in the presser.

According to White, it will bolster the appeal of in-fight wagering. Online/mobile sportsbooks already take in-fight action on UFC fights, but UFC Event Centre purportedly will make it a more appealing market.

“We have the most passionate, diehard fans of any sport, and they’re going to love the option to place bets live during a fight,” White said. “Betting operators are also going to love this product because, unlike other sports, UFC has no off season. The action will be non-stop for fans and sportsbook operators.”

In exchange for access to UFC Event Centre, sportsbooks will pay a licensing fee and share an undisclosed portion of the gaming win from the UFC fights.

UFC Event Centre is going to offer fans dozens of new betting markets that aren’t currently available with in-fight wagering. Fans will be able to find in-fight props such as takedown attempts, knockdowns, you name it.

As White alluded to, the product will help sportsbooks better serve the diehard fanbase.

However, it’s unclear how many of the new betting options will appeal to the casual fans, who are generally less knowledgeable about the sport. The UFC is surely hoping UFC Event Centre will, over time, convert casuals into diehards. Fan engagement is the name of the game.

The UFC reportedly has a rapidly aging fanbase relative to many other sports.

Compared to other sports, the UFC has a statistics problem. Not only are some stats for the relatively young sport subjective, many casuals aren’t always aware of what they are looking at. MMA incorporates a multitude of stand-alone sports. For example, casuals might not be able to tell if a maneuver was a submission attempt or merely an attempt to get the fight off the canvas.

The speed of the action in MMA, which is continuous across the five-minute rounds, might also serve as a limit to the in-fight betting handle. It’s hard to check out betting lines and monitor the action simultaneously. Wagering in-between rounds, when the fighters are on their stools, might be more feasible.

Long-term impact on the sport itself?

UFC/IMG Arena will get a share of the sports betting win. The bigger the handle, the better it is for the UFC.

It’s no secret that MMA casuals prefer kickboxing-style fights that resemble Rock’em Sock’em Robots, and generally are less fond of bouts with heavy grappling. It’s easy to imagine casuals being more interested in striking-related wagers because that is ultimately what they want to see.

Referees in UFC fights are independent of the MMA promotion, which is a good thing.

UFC/MMA rules stipulate that when the fight stalls on the canvas, the referee should order the fighters to return to their feet. It’s a rule that is of benefit to spectators, though purists hate it.

UFC referees have taken criticism over the years for allegedly premature stand-ups.

If grappling-related in-fight handle pales in comparison to striking-related handle, the UFC could be further incentivized to nudge the sport to be more like kickboxing and even less like wrestling/jiu-jitsu.

With that said, the integrity of the sport is not at stake.

The product could be most attractive to the BetMGM platform. Last month, MGM and its sports betting venture ROAR Digital announced a sports gambling partnership with Buffalo Wild Wings, the nation’s leading sports bar chain. Buffalo Wild Wings is a popular destination for UFC fans, especially those in the midwest, who don’t want to buy the expensive PPV at home.

Another likely buyer is The Stars Group, which powers the FOX Bet online/mobile sportsbook. The UFC and TSG have an online gaming marketing partnership. FanDuel’s parent recently agreed to buy TSG.

Other top brands in the sports wagering industry will of course also be interested, especially if in-fight betting grows in popularity like the UFC and IMG Arena thinks it will.

As far as taking MMA (or combat sports more broadly) out of the “other” category that some state gaming regulatory bodies have for sports other than football, basketball, and baseball, UFC Event Centre is drawing slim. Time, of course, will ultimately tell.