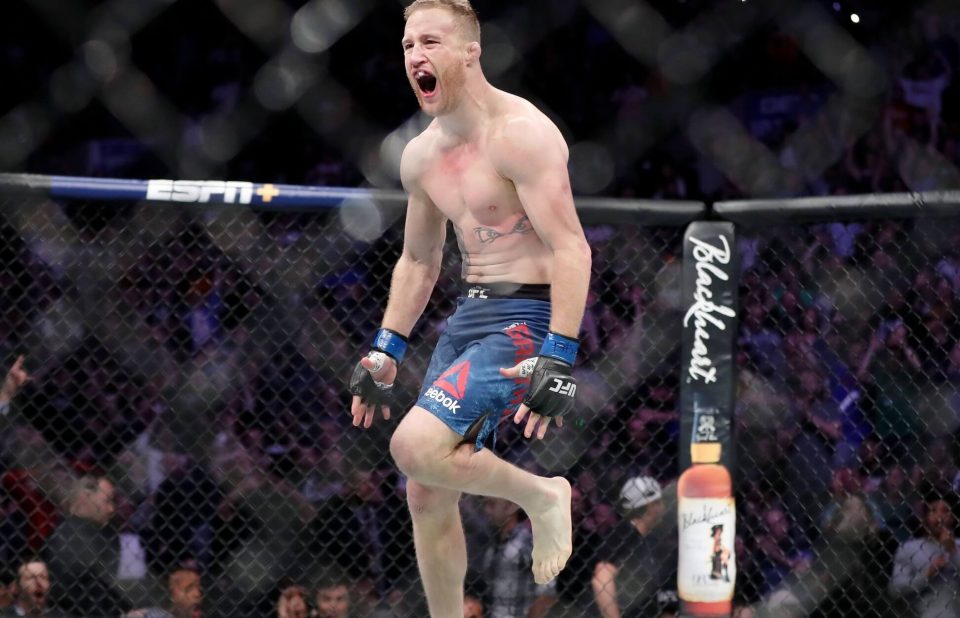 The UFC is back this weekend with Fight Night 158 in Vancouver, Canada, and the main event should be a barn burner. Sportsbooks in various states agree, but you can also say that the public thinks so and the books are a reflection of that sentiment. Chicken or the egg?

Fun fact: The original use of “barn burner” in reference to a game or sporting contest dates back to the 1930s, and it was used for the card game bridge. Folks back then might be at a complete loss for how to describe the barn burner spectacles of today.

The card is headlined by a thrilling lightweight (155 lb.) matchup between title contenders Justin Gaethje and Donald “Cowboy” Cerrone. The winner of the bout is the favorite to be next in line for a title shot after champion Khabib Nurmagomedov and Tony Ferguson, both on 12-fight UFC win streaks, finally settle their business in an anticipated superfight for sportsbooks.

The five-round affair is more than likely going to excite fans, as Gaethje is MMA’s equivalent of a high-stakes gambler. The 30-year-old goes for broke every fight. His 20-2 professional record includes 17 wins by KO/TKO, while his only two defeats have come via KO and TKO, respectively. However, he has been rocked in many of his fights. The last decision on his fighting resume dates back to 2014.

Cerrone, 36, has a professional MMA record of 36-12, making him one of the most experienced fighters in UFC history. The bout against Gaethje will mark his fourth fight since dropping from the 170 lb. weight class back to his old home of 155 lbs., a weight cut that is known to be a brutal one. Cerrone, who stands at 6’1” compared to 5’11” for Gaethje, admitted this week that the cut to 155 saps so much energy that he can barely walk near the end of the process. You won’t see that on any promo.

Gaethje, appropriately nicknamed “the highlight,” was the recipient of “Fight of the Year” accolades from multiple media outlets for both 2018 and 2017. The Cerrone fight could make it a three-peat.

While you probably don’t need to bet on this fight to be on the edge of your seat with your hand over your mouth, having some epidermis in the game through a low-stakes wager can give you some extra excitement. There might also be spots for some value, if you’re someone who seeks that potential small edge over the house as a necessary part of the gaming experience.

Legal sports betting is active in 13 states right now, with only a handful having online/mobile in the mix.

At FanDuel’s online sportsbook in New Jersey, the leading book in the state in terms of handle, Gaethje opened at -188, with his line moving to -194 as of Friday morning. Cerrone is +158.

Gaethje’s current price at FanDuel gives him a 66% implied probability of winning, which potentially has some value considering where Gaethje is at in his career versus Cerrone being on the back end of his. Cowboy’s popularity is likely keeping the moneyline a little closer than it could be, as sharp money apparently came in on Gaethje. It is MMA, and anything can happen, of course.

FanDuel’s prices on Gaethje’s method of victory reflect his history. He’s -125 to win by KO/TKO and +850 to win on points. The only two decision results on his resume came in three-round affairs, so not many people are imagining Gaethje winning on the scorecards tomorrow. Cerrone is also +850 by a decision, and +380 by KO/TKO. Cerrone, who has some submission victories, is +750 to win by sub.

FanDuel is also offering a +400 price on the fight going to the judges, with a -650 line on it not. It’s a steep price on the fight ending before the horn in round 5, but it could be worth a flier for some skin in the game considering that Gaethje over and over again has said he loathes the idea of any of his fights — win or lose — going the distance. He’s a rare breed.

At the Parx Online Sportsbook in Pennsylvania, bettors can find a more attractive moneyline on Gaethje. Parx is offering him at -186, with Cerrone listed at +150.

Parx is offering a less attractive +750 on Gaethje via points, and -134 for him via KO/TKO. Cerrone by KO/TKO is also not as good at Parx as it is at FanDuel. Parx has Cowboy at +333 to finish his opponent by KO/TKO, but the same price as FanDuel when it comes to Cerrone by decision.

It’s worth noting here that FanDuel’s prices are the same whether you’re in PA or NJ.

As far as the moneyline goes, whether you’re in PA or NJ, the FOX Bet online sportsbook (formerly BetStars) has the best straight bet on Gaethje at -175.

For online bettors in Iowa, William Hill and PointsBet are the only legal options for you. Both books have Gaethje at -200 and Cerrone at about +160. Despite the Gaethje price not being the most attractive relative to what FOX Bet is offering on the east coast, -200 could still be worth a small bet to put you a few inches closer to falling out of your chair.

PointsBet stands out for some unique betting options. In addition to its high-risk spread betting concept, you can wager on whether the fight will end in the first 60 seconds. It’s an interesting prop considering Gaethje’s style and Cerrone’s reputation of being a relatively slow starter.

As far as fixed odds, PointsBet is offering a +900 price on Gaethje winning within a minute, while it’s +1300 on Cerrone. The Cerrone line seems foolish, but the +900 Gaethje line could make for a fun sweat, though it probably is still negative EV (expected value). PointsBet calls the bet “Gone in 60 Seconds.”

As for those in West Virginia, your online/mobile sportsbook options are FanDuel and DraftKings. Prices at both books within the state are the same as the odds offered in PA and NJ.

DraftKings will give you a competitively priced -186 on Gaethje, with +150 on Cerrone. Many of DraftKings’ props are more or less than same as its competitors, but the platform does have some unique options as well. For example, you can get Gaethje at -2000 to not win on points. If he wins by finish or loses in any fashion, you win the bet. Gaethje would rather lose than put on a boring fight.

For folks in Rhode Island, the sole online sportsbook, powered by William Hill, is only offering moneyline bets. You can get Gaethje at -190 and Cerrone at +160.

Iowa Casino Admissions Flat In August, But Helped By Addition Of Sportsbooks