U.S. Sportsbooks Waiting On Regulatory OK For Betting On Chess

Oddsmaker Kambi says that its operators in the U.S. would book action on the 2020 World Chess Championship upon state approval. 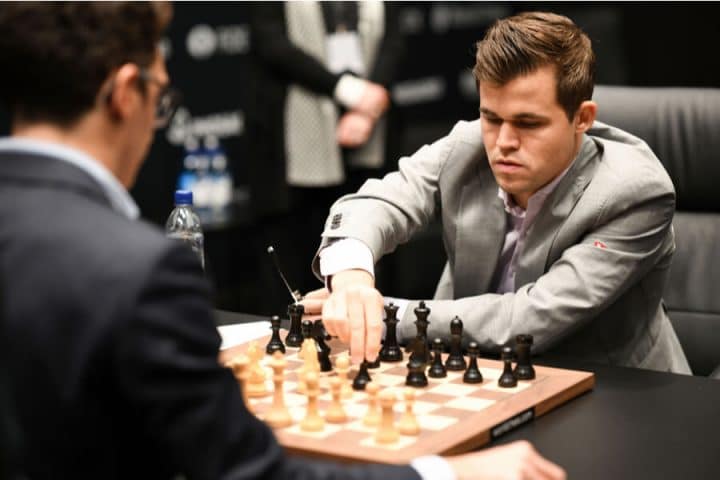 It appears to be a matter of time before the nascent U.S. sports betting industry takes its first bet on one of the oldest and most storied games in the world.

Already a staple at some European sportsbooks, the game of chess has yet to find a home in the American legal sports wagering industry. That could soon change, as the game’s top grandmasters are currently in the midst of trying to become the challenger against Norwegian Magnus Carlsen in the 2020 FIDE World Chess Championship. The Candidates Tournament, which decides who the challenger will be, takes place this upcoming spring. Carlsen is about a 2/1 favorite against the field right now.

American Fabiano Caruana, the 2018 challenger, is automatically qualified for the Candidates Tournament and is among the favorites to again compete for the game’s most coveted title.

According to the Kambi Group, which powers sports betting markets for many U.S. online sportsbooks, there more than likely will be wagering on the 2020 World Chess Championship, pending regulatory approval.

“We’ve been pricing major chess tournaments for a long time now, so it’s just a case of whether operators decide to take this from us, should state regulations permit them to offer it,” Gerard Starkey, head of content at Kambi, told US Bets via email.

Say yes to the chess

Legal U.S. sportsbooks are already allowed to take action on darts, bowling, and now esports. Chess is a natural fit for betting, especially with a global fan base estimated at 600 mm. While it’s impossible to know the number of Americans who know how to play chess or play with any regularity, it’s been estimated that 15 mm people in the U.S. at least dabble with the game. Combine that estimate with the number of people who enjoy wagering on games/sports in general and you have plenty of customers for a legal betting market.

“If regulators permit, our operators would take this,” Starkey said. “Unibet has been a big sponsor of chess tournaments in the past, even sponsoring the World Championship. We currently have markets available in Europe for ongoing and upcoming chess tournaments, so we’re just waiting on the regulators in NJ, PA, etc.”

Unibet, which was a gambling sponsor of the 2018 World Chess Championship in London, recently launched in Pennsylvania and New Jersey. Chess markets aren’t yet listed on its U.S.-facing platforms.

To date, futures and pre-game betting are primarily what chess bettors have to choose from. The World Chess Championship, where games take hours to complete and chess engines are able to analyze a position in real time, could potentially be attractive to consumers looking to bet while they’re watching a live stream, but that’s not the situation at the moment in jurisdictions that currently see wagering on the game.

Erik Backlund, head of sportsbook in Europe for Kindred Group (Unibet’s parent company), told US Bets during the 2018 World Chess Championship that pre-game wagering was much more popular than in-play.

“It is not a massive betting sport and it’s mainly pre-game so far,” Backlund said. “In-play is very difficult to compile odds for, and also for the punters to be confident enough to place bets. For most/all betting operators, it hasn’t really made sense to focus on models supporting a great in-play trading product, due to the low number of active chess punters.”

In-game wagering, whether it’s the NFL or a chess tournament, is considered to be the major arena for growth in the nascent legal sports wagering market. The first legal chess betting markets in the U.S. might be strictly futures or pre-game, but that would likely change as the industry continues to evolve.