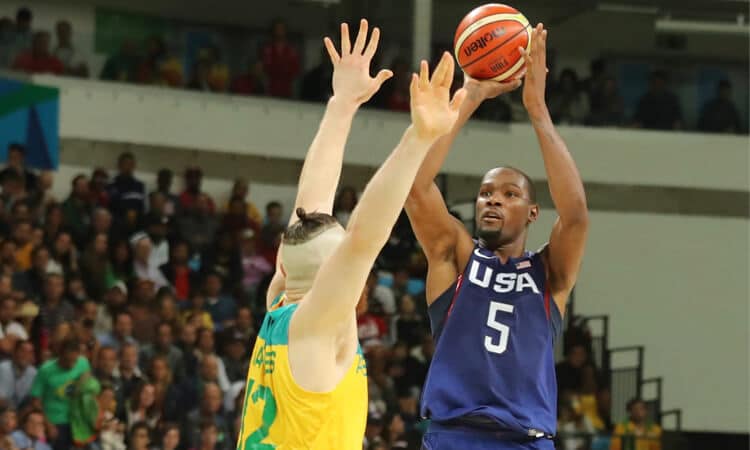 Just days after a fellow known as “The Greek Freak” cemented himself as the most dominant force in the NBA, the onus is on Team USA to prove this increasingly international game still belongs to the country where it was born.

The Tokyo Olympics are underway, and the American men’s basketball team begins group play on Sunday against France.

This whole tournament was supposed to be, pardon the obvious metaphor, a layup. The U.S. is on a 25-game winning streak in the Olympics and has won the last three gold medals.

But suddenly, based on the betting odds offered by regulated sportsbooks, winning a fourth straight has gone from a layup to … more like a free throw, which NBA players made at a collective 77.8% rate this season.

In warming up for the Olympics, Team USA lost a stunner to Nigeria and then fell again two days later to Australia (before righting the ship against Argentina). On the one hand, those struggles came without three key players who were busy battling it out for an NBA title stateside — Devin Booker, Khris Middleton, and Jrue Holiday, all of whom have now arrived in Tokyo. On the other hand, Bradley Beal and Kevin Love have since been removed from the team because of health issues, replaced by decade-past-his-prime journeyman center JaVale McGee and unproven 21-year-old Keldon Johnson.

And there’s a general sense that this group coached by Gregg Popovich hasn’t had a chance to jell as a team and, for all of its individual talent, doesn’t have the same cohesiveness as some of the other national teams with a theoretical shot at the gold.

Odds to win it all, to win on Sunday

In opening up against France, the U.S. team faces either the fourth or fifth favorite among the 12 teams in the Olympics, depending on which book you’re looking at. It’s the U.S. first, followed by Australia and Spain in some order, then either Slovenia or France.

Here’s a sampling of both the U.S. and France’s latest gold medal odds at six legal sportsbooks:

Clearly, FOX Bet still views the Americans as a massive favorite. But at books like BetRivers and Unibet, which get their opening odds from the same supplier, Kambi, the price on Team USA is rather attractive if your confidence in them hasn’t been shaken.

Meanwhile, if you want to take a shot on France to go all the way, FanDuel Sportsbook offers by far the most bang for your betting buck.

Interestingly, the U.S. team is a more prohibitive favorite to prevail in this one game on Sunday than to capture gold at the end of the tournament. They’re favored by either 11.5 or 12 points, depending on the operator, and are no lower than -650 to extend USA basketball’s Olympic Games winning streak to 26.

Oddsmaker John Murray at the Westgate Las Vegas SuperBook told US Bets, “I think that’s a pretty scary team to face if you’re the U.S. and three of your best players may or may not have even practiced with the rest of the team yet.”

In terms of the talent of the individual players, the matchup still shouldn’t be close.

Nor should any matchup involving Team USA over the next two weeks.

The U.S. has a fairly easy road in group play, with France representing the toughest of their foes. The Americans on Wednesday face Iran, a team with gold medal odds ranging from 100/1 to 1,000/1, the highest of any team competing in Tokyo. And on Saturday, July 31, Team USA faces the Czech Republic, whose gold medal odds range from 80/1 to 100/1.

The NBA season is over. So for basketball fans, it’s either this or Space Jam: A New Legacy. Based on the film’s reviews … uh, go Team USA!