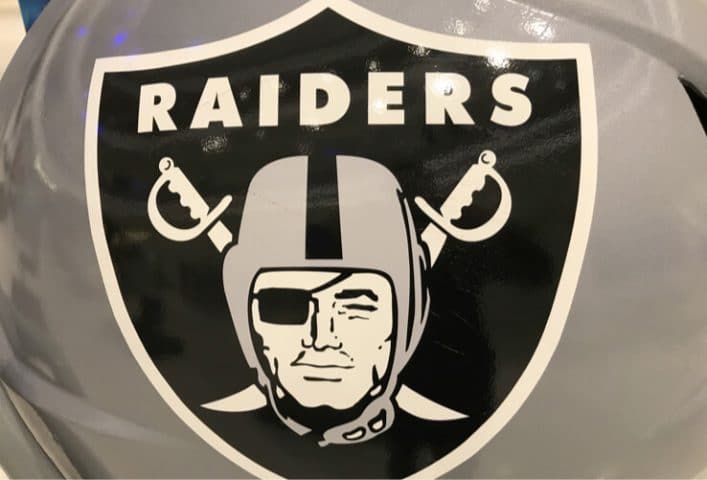 The Oakland Raiders are not exactly what you’d call a hot team. They’re a miserable 1-8, they have the worst point differential in all of football, and their $100 million coach is either lost in today’s NFL or tanking for a top draft pick (or both).

But the Las Vegas Raiders? They’re one of the hottest franchises in all of sports. Never mind that they won’t play a game for almost another two years. Sin City has 2020 vision, as evidenced by Caesars Entertainment Corporation nailing down an unprecedented 15-year partnership deal with the silver and black earlier this month.

“Getting an NFL franchise changes the image of a city,” longtime Las Vegas insider and gambling industry expert Nolan Dalla told US Bets. “And we’re not just getting a franchise in the NFL, which is the premiere sporting spectacle in this country. We’re getting a storied franchise in the Raiders. So just about everyone I talk to is excited.”

“It’s been huge from the moment they announced it,” agreed Las Vegas Advisor Publisher Anthony Curtis, a resident of Vegas for nearly 40 years. “It immediately eclipsed hockey; it was all just, ‘the Raiders are coming.’ If the [NHL’s Vegas] Golden Knights hadn’t done so well, gone to the Stanley Cup finals, I think they’d have been off the radar with people around here. As it is, the Golden Knights are a big deal because of their results. But it’s still all Raiders. That’s what everybody’s talking about.”

Notable in Caesars coming aboard as “the first founding partner of Las Vegas Stadium” is that nowhere in the press announcement was there any indication of exclusivity. If anything, the phrasing that it “marks the first Raiders deal with a gaming and hospitality company” strongly implies there will be more to come.

What does this particular partnership entail? A Caesars-branded Owners Suite, unique stadium access for Caesars customers, a branded stadium entrance, and various forms of multimedia signage and advertising.

That’s a start, but there’s plenty of room for other gambling companies in one form or another.

“There will be a lot of deal-making for sure, because the people on the business end of the Raiders organization are counting on the casinos bringing in their own customers and buying boxes, treating their high rollers,” Curtis said. “I don’t know how many branding opportunities there are, but I expect all the big guys are going to want to get their name up there one way or another. But I think the bigger business is in the selling of seats and boxes.”

Multi-million dollar corporate alliances are just one small piece of the potentially massive economic impact of the Raiders digging their cleats into Vegas.

A study of the economic impact of the Raiders and their stadium by the Southern Nevada Tourism Infrastructure Committee said that although the 65,000-seat indoor stadium would cost an estimated $1.9 billion, including $750 million of public money, the annual economic impact is projected to be $620 million.

There’s construction employment, there are new permanent jobs, and there’s an increase in visitors and hotel stays (research suggests that stadiums do drive economic development in strong tourism locations). It all adds up to the cost of the stadium being paid off in about three seasons of football, in theory.

Until then, however, there is some public backlash to the investment.

“People were ecstatic about getting the Raiders at first,” Dalla explained. “But then, the devil’s in the details, so when the stadium deal came about, there was a lot of controversy as to who’s going to pay for the stadium. There was some resentment because this city is struggling financially in terms of trying to keep up with its infrastructure and education and all the people living here, and here we are allocating hundreds of millions of dollars to a rich NFL team owner.

“So that created somewhat of a division. While there was a lot of excitement, a sizable percentage of this community was also resentful and remain so against what is considered by many to be a questionable appropriation of public treasury.”

Another negative that Las Vegas residents and regulars are bracing for is stadium traffic.

The stadium is located just off the Strip, at Interstate 15 and Russell Road. (And you can watch it going up, live, from anywhere at any time.) Every stadium in every city sees maddening levels of game-day traffic, but if you’ve ever been caught in gridlock on the Strip, you know the potential for going-nowhere road rage is especially great in Vegas.

“I think it’s going to be a nightmare for traffic,” Curtis said. “They wanted it to be close to the Strip; it is. They wanted it to be easily seen; you drive right by it on the interstate. But I just recently got stuck in a traffic snarl that was just brutal because of a Golden Knights game, and that’s for a hockey game that seats less than 20,000. Vegas is already tough with traffic, people don’t realize how skinny the Boulevard is. People are going to quickly learn that you don’t go anywhere near that area on game days.”

Parking is already shaping up to be an issue, as the stadium is setting up remote lots with shuttle services anywhere from about a quarter-mile to a couple of miles away.

Fortunately, the Raiders’ stadium will be walkable from the south end of the Strip, especially once it hits October and the extreme summer heat is fading from view.

Always bet on black (and silver)

One way in which location doesn’t matter much is the marriage between the Raiders and sports betting. Maybe there will be betting windows, or at least electronic kiosks, in the stadium, but even if they don’t go that route, people can already place bets on their mobile apps. And maybe by 2020, Nevada bettors won’t even have to have opened their accounts in person at a casino.

The timing is perfect. On May 14, the Supreme Court overturned PASPA, opening the door for states other than Nevada to legalize and regulate sports betting, so the expansion of that vertical and the arrival of an NFL team in Vegas seems likely to give America something of a signature sports betting franchise.

Certainly, the September handle and revenue numbers in Nevada indicate that the Las Vegas sports wagering industry is doing just fine in a post-PASPA world.

“We saw this when riverboats came online and all of a sudden you could gamble in Iowa and Illinois and Mississippi, and places that you never could before,” Curtis said. “Everyone was like, ‘Oh, this is going to be terrible for Vegas.’ And it turned out to be the opposite. It was good for Vegas. Gambling became mainstream. And everybody wanted to come here.

“I think we’re going to see something similar with sports. I think the only thing that we might see fail to grow, possibly, is Super Bowl crowds — when sports betting becomes widespread people aren’t going to have to come to Vegas to be in a casino atmosphere for the game. But in general, all of the sanitization of sports wagering is nothing but good for Vegas. We’re seeing it already in numbers, I think we’re going to continue to see that, especially when the Raiders get here and there’s that atmosphere. It’s all positive. There’s nothing negative for Vegas in what’s happening right now with sports wagering.”

Let’s get ready to fumble!

For decades, the biggest sports draw in Vegas was major boxing matches — particularly heavyweight championship fights. As the heavyweight division shifted away from American control around the turn of the millennium, with Lennox Lewis and then the Klitschko brothers emerging as the dominant (and frequently dull) figures, smaller boxers (like Floyd Mayweather and Manny Pacquiao) picked up some of the slack and MMA absorbed the rest of the mega-event attention.

With eight home games — plus two home preseason games, possible home playoff games, and maybe eventually a Super Bowl — those Vegas mega-events are about to become a lot more routine.

“It will be like having eight or more heavyweight prize fights per year in Las Vegas,” Dalla said. “The city used to be transformed by prize fights — people were spending money on a fight weekend and you could see it everywhere. So I expect this city to now change like that 10 or 15 times a year because you’ve got so many more major spectacles coming in, including a sizable percentage of fans coming in from out of town. I believe that the character of the city will change, and the finances will be elevated on those specific weekends when the Raiders are hosting games. During the off-season will we notice it? No. But I do think that period from September to January, every weekend’s going to be crazy here.”

That seems like a safe prediction, especially if the much smaller scale Golden Knights are any indication.

“All of us were surprised by not just the success of the Golden Knights, but also the absolute devotion that this community exhibited toward the franchise in such a short period of time,”  Dalla added. “Even as the Golden Knights are struggling a bit this season, the buzz is the same. I see Golden Knights jerseys everywhere, I see bumper stickers, I see ‘Vegas Pride’ signs everywhere.

“Las Vegas has never had a professional team, so this is an entirely new phenomenon for us. So I can just imagine, if this is happening with hockey, imagine that with an NFL team. I think the Raiders will just shut down this city when they play. This city will come to a grinding halt. It’s going to be the Green Bay of the desert.”

Shuffle Up And Delay: Reflections On The 10th Anniversary Of Poker’s First November Nine