Without Baffert, The Kentucky Derby Rolls On

Zandon and Epicenter are the favorites, but could there be a longshot upsetter this year? 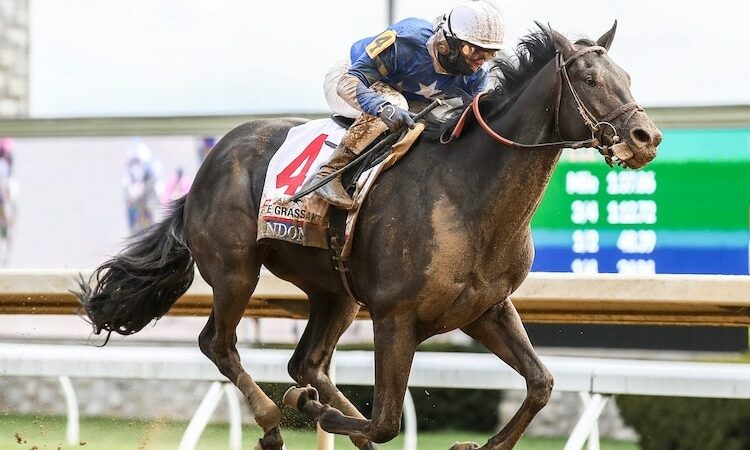 The Derby is still the Derby, and that trumps all.

This has been the unstated stance from Churchill Downs Inc. since it suspended trainer Bob Baffert from its properties, after his trainee, Medina Spirit, came up positive for a banned substance after his 2021 Kentucky Derby victory.

And those on the ground involved in the industry and among horse racing media have largely said there is no silver-haired cloud looming over Derby week, even though Baffert’s famous spot at Barn 33 has been stripped of all its signage, which once listed all of the trainer’s accomplishments at the track — including six Derby wins. One industry source described the old Baffert barn as a “desolate wasteland,” even though horses have been moved into the stall since.

Churchill Downs has done its darndest to wipe Baffert out of the Derby picture — because no single person is bigger than the Derby, the thought goes — and it appears to have worked, at least for now. Although it’s impossible to ignore Baffert’s influence on Derby entrants Taiba and Messier, who were once trained by the Hall of Famer but were moved to Tim Yakteen when Baffert’s 90-day suspension by the Kentucky Horse Racing Commission began April 4, most seem to be focusing on the horses, not the “face of horse racing” missing from the backstretch.

Maybe it’s compartmentalization and a desire to focus on the positive. Maybe it’s a bit of “he who must not be named.” Maybe the fascinating puzzle that is this year’s Derby is all anyone can think about. Or maybe everyone is just glad to move on.

All that’s well and good, but should one of the former Baffert trainees win the 2022 Kentucky Derby, rest assured, the circus will start up again immediately and head to the Preakness.

Will Taiba or Messier take home the roses?

Yakteen, a former Baffert assistant, knew what he was getting into when he agreed to train his former boss’ best horses ahead of the Kentucky Derby and Kentucky Oaks, but it was still a bit jarring at first to confront the media hoard awaiting outside his barn at Churchill Downs for the first time this week.

“The media crush is here, and you just try to appease everybody, but your main focus has to be the horses and your owners that are invested in these horses,” Yakteen said of his first Derby starters, although he has experience at the race as an assistant. “Coming to the Derby, I’ve been here before, and there’s no media crush like the Derby. That’s part of the vibe, and it’s something all our fans look forward to and are deserving of.”

Taiba and Messier — the first- and second-place finishers, respectively, in the Santa Anita Derby — aren’t the favorites in the Kentucky Derby, but they also aren’t outsiders.

At 12-1 and 8-1 on the morning line (although that may not be how the betting actually goes), they have legitimate shots and have shown plenty of talent, as Derby horses with Baffert tend to.

Does anyone other than Battaglia on this earth think Messier will be shorter odds than Taiba?

And it’s not like Baffert horses only win as favorites, although eventual Triple Crown winners American Pharoah and Justify did. Authentic won the Derby at 8-1 in 2020 and Medina Spirit crossed the wire first at 12-1 last year. (Although he was eventually disqualified months later, money was still paid out to bettors who wagered on him to win.)

There is some question, however, about Taiba’s workout pattern and how unprecedented it would be for a horse to win the Derby off just two races, but few would be shocked if either ended up wearing roses.

However, to do that, they’ll have to beat two legitimate stars.

The favorites are tough

There may be a disagreement as to who should be favored in the end, but there is no doubt the two top choices for this year’s Kentucky Derby are standout performers.

The morning-line favorite is Zandon — although “Mattress Mack” will have a say in who ends up favored in the win pool — who closed from 11th place to win going away in the Bluegrass Stakes at Keeneland on April 9.

On-track observers have been gushing about how the nearly black colt has trained and how he looks schooling, but that is not necessarily an indicator of success. Zandon does, however, have the positive trend of progression. After a debut win at Belmont Park in October, the Chad Brown trainee’s speed figures have gotten better with each race, although they didn’t always result in wins. He finished second in the Remsen Stakes at Aqueduct in December, then hit the wire third in the Risen Star Stakes at Fair Grounds in February.

In the Risen Star, however, Zandon was well-beaten, albeit after a poor start, by the horse everyone thought would be favored in the Kentucky Derby for much of the run-up, Epicenter.

A speedy bay colt trained by Steve Asmussen, who has won more races than any other trainer in North America but has yet to win a Kentucky Derby, Epicenter had a nearly flawless winter at Fair Grounds in New Orleans.

A lot is being made of trainer Steve Asmussen's winless record in the @KentuckyDerby, but perhaps a more concerning stat is he is on a 72-race losing streak in Kentucky dating back to Nov. 28. 0/14 @churchilldowns, 0/18 @keenelandracing, and 0/40 @TurfwayPark

He began with a dominant win in the Gun Runner Stakes in December, lost the Lecomte Stakes by a head in January, and bounced back in the Risen Star, where he beat Zandon and fellow Kentucky Derby qualifier Smile Happy.

But all of his wins to that point had been on the lead. He had never shown versatility — an important trait for a race with 20 horses like the Kentucky Derby — but that changed in the Louisiana Derby on March 26. In the 1 3/16-mile race, Epicenter stalked and pounced, then pulled away to win by 2½ lengths.

#Epicenter just too good for 'em all in the https://t.co/EynbFaLDcD Louisiana Derby from @fairgroundsnola, breaking the track record with Joel Rosario up for Steve Asmussen.

So, who will be favored when the gates open? Or better yet, who should be favored?

“I have a lot of respect for Epicenter. I could see it going either way, by the time they open the gate,” Brown said after the post position draw, where Zandon drew gate No. 10, an ideal spot for the long run into the first turn. “Certainly Epicenter has done nothing wrong, and he’s clearly one of the horses to beat. … At the end of the day, it won’t really matter. Just the result will.”

Epicenter did not draw as well, in gate No. 3, which means he is in danger of getting shuffled back and losing position on the inside if he doesn’t break well.

“A little concerned with it, because it makes it that much more important for him to get away from the gates cleanly, but I think it’s something he’s done in the past and he’s capable of, as far as breaking from the gates well,” Asmussen said after the draw.

And who should be favored?

“It won’t change the outcome of the race,” Asmussen said. “[I have] nothing but respect for a very deep and quality field that’s obviously training brilliantly for this year’s Derby. But Epicenter’s confidence level is where it needs to be, and he’s training very nicely over the Churchill track.”

The great thing about the Kentucky Derby, from a betting perspective, is that there are ample opportunities to make a big score with longshots and exotic bets. On a normal Saturday, a 10-horse stakes field is a good gambling opportunity. The Derby has double that.

But outside of Country House in 2019, the 65-1 shot who was only elevated to first after Maximum Security was disqualified for interference, the scramble of the Derby has been formful in recent history. Medina Spirit and Authentic were solid prices under normal stakes-race circumstances, but even they were the third and fifth choices, respectively, in the massive Derby field, and favorites won for six straight years from 2013-2018.

But there some interesting angles, including one colt that shares a similarity with Animal Kingdom, the only horse to win the Jeff Ruby Steaks (then called the Spiral Stakes) on the synthetic track at Turfway Park, then win the Kentucky Derby on dirt. Lil E. Tee also took the Spiral-Derby double in 1992 (when it was called the Jim Beam Stakes), but Turfway had a dirt track then.

The synthetic prep winner this year is Tiz the Bomb, 30-1 on the morning line, who broke his maiden on dirt at Ellis Park but finished his 2-year-old year as a very good turf horse (second in the Breeders’ Cup Juvenile Turf is nothing to sneeze at). But his one try on dirt this year was a dud (a far-back seventh in the Holy Bull Stakes at Gulfstream Park), before he switched to the synthetic at Turfway for two wins.

Another longshot — although his odds may be lower than his 20-1 morning line, based on positive impressions from his training since his arrival at Churchill Downs — is the Japanese-bred and Japanese-based Crown Pride, who won the UAE Derby in Dubai to qualify, despite a wide trip all the way around.

A Japanese horse has never won the Kentucky Derby, but horses from Japan have been on the ascent at international racing festivals in recent years. Five Japanese horses (including Crown Pride) won from eight races on the Dubai World Cup card in March, four won on the Saudi Cup card in February, and Loves Only You became the first Japanese Breeders’ Cup winner (Filly & Mare Turf) just last year, which was followed, three races later, by Marche Lorraine’s win in the Breeders’ Cup Distaff.

Add a Japanese win in the Kentucky Derby to that equation, and it would truly shake up the horse racing world.

If Crown Pride, bred in Japan, qualified for the #KyDerby by way of Dubai and has had four workouts in 11 days, wins this Kentucky Derby, the American thoroughbred breeding industry is going to go into full-blown panic mode.