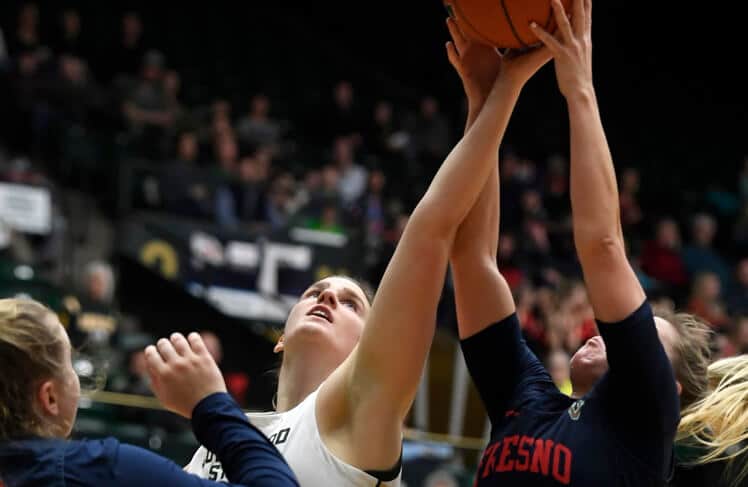 Fresno State’s Cavinder twins, Haley and Hanna, are two of the best guards in women’s college basketball, with the former notching a 17-point, 14-rebound, 13-assist triple-double in a win over San Jose State on Saturday.

The 5-foot-6 juniors from Gilbert, Arizona, have amassed millions of followers on social media — TikTok in particular. But that sort of stardom hasn’t moved the needle much with sports bettors.

“Betting has increased over the years on pretty much everything, and women’s basketball is no exception, especially when we get to the NCAA Tournament,” said Adam Pullen, Caesars Sportsbook’s assistant director of trading. “As far as handle, it unfortunately hasn’t drawn close enough to even compare to the men’s game.”

WynnBET senior trader Motoi Pearson put it more bluntly, saying, “There is no comparison between women’s college basketball and men’s. It is two different worlds in the eyes of the betting public. It’s not even close in terms of handle.”

And don’t even try to get a bet down at Circa, which doesn’t book women’s basketball.

But one area where the Cavinder twins and their female counterparts are beating up on the boys is in the lucrative Name-Image-Likeness (NIL) arena. A recent report issued by the Lincoln, Nebraska-based NIL marketplace Opendorse found that while college football had garnered the largest share of NIL compensation to date at 47.1%, women’s basketball was next at 27.3% — far ahead of men’s basketball (15.6%).

“It was a little bit surprising,” Sam Weber, Opendorse’s senior director of communications, said of that particular data point. “I think over time you’ll see those numbers even out a little bit, especially as you get closer to March Madness. But I think a big piece of what you can attribute it to is several of the most popular athletes in college sports, not just basketball, are women’s basketball players.”

To that end, of the top nine potential NIL earners in Opendorse’s December rankings, four — the Cavinder twins, UConn’s Paige Bueckers, and Louisville’s Haley Van Lith — were women’s basketball players. While Bueckers became the very first college athlete to sign an endorsement deal with Gatorade, the Cavinders have gone on to create nothing short of an NIL empire, with their latest deal involving a 25% ownership stake in a fledgling sports apparel company founded by a pair of Fresno State cross country alums.

The Cavinders’ success comes at a juncture when the NCAA seems poised to adopt something more than its current — and virtually toothless— interim NIL policy at this week’s annual convention in Indianapolis. To date, college sports’ central governing body has punted NIL rule-making and enforcement to the states, 28 of which have passed NIL legislation, with 24 laws in effect as of Jan. 1, attorney and former All-American collegiate swimmer Julie Sommer told US Bets.

But due to the specter of antitrust challenges, whatever guidelines the NCAA adopts are unlikely to supersede current state laws, many of which prohibit student-athletes from inking NIL deals with companies associated with sports betting. That being said, Barstool and MaximBet have had no qualms about entering the space, while taking careful pains to note that their athletes are endorsing a media or lifestyle brand, not a sportsbook, per se.

“We have worked with MaximBet on what they’ve done with female student athletes in Colorado,” said Opendorse’s Weber, who added that his company is committed to not “putting student-athletes in a dangerous place where they could be ruled ineligible.”

High school athletes about to cash in?

As Weber put it, though, the NIL “landscape is evolving pretty quickly” — to the point where high school athletes could soon be making bank. To wit, Sal Stewart, a third baseman at Florida’s Westminster Christian Academy who’s committed to playing baseball at Vanderbilt, recently filed a lawsuit against the state’s high school athletic association seeking to overturn a bylaw that prevents athletes from “capitalizing on athletic fame.”

And should the NIL landscape expand to the locker rooms of America’s secondary schools, teens with the right combination of athletic skill, familial fame, and social-media savvy (we’re lookin’ at you, Bronny James!) will achieve a level of financial independence heretofore unrivaled in its mass and precociousness.