No Betting In Houston Or Atlanta, But Plenty Of Wagering Taking Place On Them 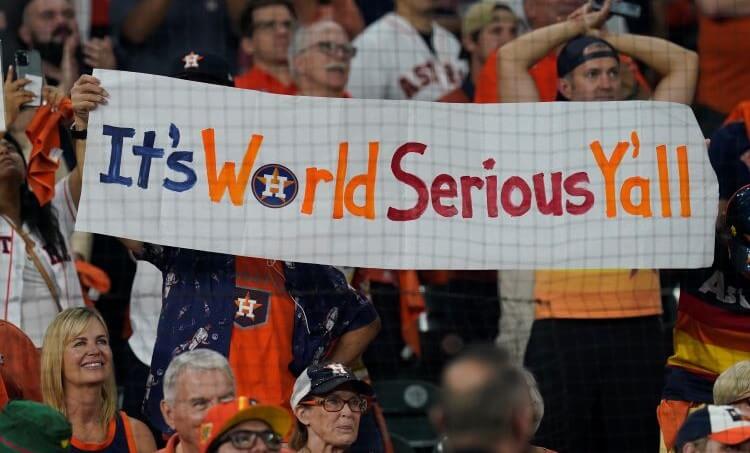 It will be at least one more year before home state fans of teams competing in the World Series can easily place a bet, but there will be plenty of legal sportsbook wagers placed elsewhere this week on either the Houston Astros or Atlanta Braves.

The best-of-seven series opens in Texas Tuesday night with the Astros favored in both the game (best price seen nationally Monday morning to bet on them was -130 from FanDuel, BetRivers, BetMGM, Caesars) and to win the series (-140 from Betfred, -145 from BetMGM) in which it has home field advantage.

Such betting could be done legally in more than 20 states, though those in Texas and Georgia remained locked out until such time as their legislatures want to join the increasing number of peers elsewhere that have legalized sports betting. Of course, if you’re an enterprising multi-millionaire who backs the Astros and can easily fly out of state, you need not be deterred by such an obstacle.

It would be the biggest win in sports betting history! pic.twitter.com/CSl5R8Ugwo

The Braves, meanwhile, could be bet with a return for winning the first game of up to +120 from Caesars. That site was joined by DraftKings and FOX Bet in offering +130 on Atlanta to win the series.

The scenario is no different than it has been throughout the postseason for either team, as Houston was favored over the Chicago White Sox and Boston Red Sox in both series it’s won so far, while Atlanta was an underdog against both the Milwaukee Brewers and Los Angeles Dodgers.

When the postseason began, bettors could have gotten as much as +600 on the Astros to win the World Series (second favorite at the time behind the Dodgers) and the Braves offered a return of up to +1200 (seventh of the 10 teams).

Astros in familiar territory, Braves not so much

The series matches a Houston team that has become familiar (critics of its cheating scandal might say all too familiar) from its third World Series appearance in five years against an Atlanta team reaching this point for the first time in this millennium.

One very interesting player connecting the teams is pitcher Charlie Morton, who helped the Astros win the 2017 championship, pitched against them in the postseason for Tampa Bay in 2019 and 2020, and now takes the mound to oppose them in Tuesday night’s opener.

Morton has been one of the busiest and most successful postseason pitchers of recent years, with a 7-4 career record, 3.45 ERA, and 1.22 WHIP in such meaningful games. He went 14-6 in the regular season this year, and in the two NL playoff series went 0-1 in three starts with a 3.77 ERA and 1.26 WHIP.

But as has been seen thus far in the postseason and is a trend of recent years, managers Dusty Baker of Houston and Brian Snitker of Atlanta have little interest in seeing their starters go far into games. Braves starters have pitched barely half of the team’s innings, and Astros starters even fewer.

For that reason, you see DraftKings putting up a prop bet offer with Morton being +300 and Valdez +250 to come out as the winning pitcher in the opener.

And both managers appear likely to rely by the fourth game on at least one “bullpen game” from a shortage of healthy, quality starters. Astros rookie Luis Garcia is lined up to face Max Fried in Game 2 and Houston’s Jose Urquidy will probably go against Ian Anderson in Game 3.

For MVP and all else, be line-shopping

There’s a good chance that by Tuesday the major national sportsbooks will be offering promotions and odds boosts on the World Series that weren’t showing up yet early Monday.

But there was already good reason to do line-shopping and compare what was offered at the various sites. Simply focusing on the odds for players to be chosen Most Valuable Player gave plenty of examples.

At FanDuel, four Astros — Jose Altuve, Michael Brantley, Alex Bregman, and Yordan Alvarez — were all equal MVP favorites at +1000, with Freddie Freeman the favorite among Braves at +1100.

And for more of a longshot, such as Braves second base star Ozzie Albies, FanDuel was offering 20/1, but FOX Bet had him at 25/1 and BetMGM went still higher to 30/1.

Similar variances were worth checking out for those wanting to bet on how many games the series would last.

For those counting on the minimum four games, FOX Bet offered +650, while DraftKings and PointsBet were at +600, and FanDuel and Betfred were at +500.

For the series to go the full seven games, FanDuel and Betfred offered the best payoff at +210.

The teams once played each other regularly before the Astros switched to the American League in 2013, but they have not faced one another since 2017.

Houston has been strong throughout 2021, but at no time more so than now, considering its loaded lineup has scored 67 runs in 10 playoff games.

So while it would not have been the fall classic matchup envisioned in either midseason or spring training, it does appear certainly to match two legitimate teams playing at their best now.

Savvy bettors who want more involvement in the games than as just casual viewers of the FOX telecasts would be wise to check out whatever special offers the sites add before first pitch. Among those already available:

Most of the sites also have numerous player props with odds on their hitting home runs, scoring runs, or even just getting a hit Tuesday night. For the Braves’ Rosario, for example, betting him at BetRivers to continue his postseason hot streak and get at least one hit in the first game is -230, while betting him to go hitless is +175.