If COVID-19 prevents a live WSOP from happening in 2020, a hybrid online-live approach could at least save the Main Event tradition. 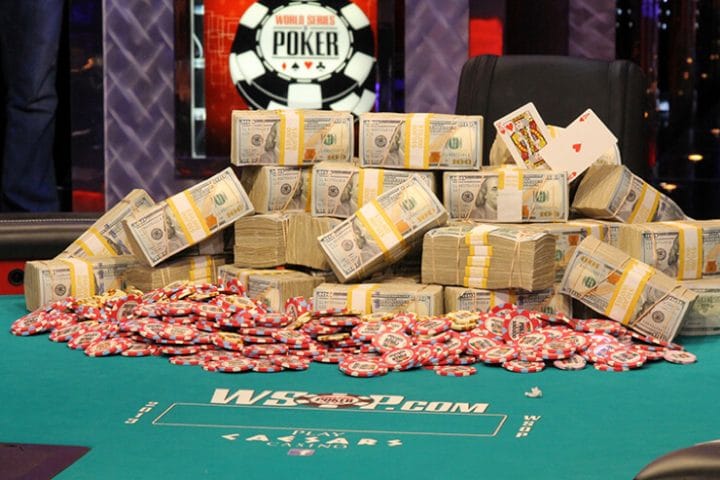 The 2020 World Series of Poker was originally scheduled to run from May 26 to July 15 at the Rio All-Suite Hotel & Casino in Las Vegas, featuring 87 live bracelet events and the 50th annual running of a single-entry no-limit hold’em freezeout “Main Event” to determine this year’s world champion of poker.

But the COVID-19 health crisis has forced, at the very least, a postponement to the fall, and quite possibly a cancellation altogether. Although Las Vegas casinos have reopened, most poker rooms have not. And those that have are capping tables at about half their normal player capacity.

With the exception of partying at a crowded nightclub, it’s hard to think of a casino activity more conducive to the spread of the virus than tournament poker — especially a tournament series as massive as the WSOP.

The 2019 edition drew a record 187,298 entries. Of those, 8,569 descended upon the Rio for the Main Event. It’s a tournament that fills hundreds of poker tables at a time and creates shoulder-to-shoulder traffic in the hallways — and you don’t want to know about the bathroom lines.

The bottom line is, unless an approved, easily accessible vaccine or treatment is available in the next few months, an in-person 2020 WSOP has to be regarded as a long shot.

Presumably recognizing that reality, World Series organizers extended an alternative option to poker players last week, announcing the “World Series of Poker Online,” a series of 85 tournaments that will each award gold bracelets. They’re not accessible to all, but given the current combination of COVID-19 and online poker’s limited legality, it’s the best the WSOP can do. Players located in Nevada or New Jersey will be able to enter the 31 U.S. tournaments on WSOP.com, and international players in countries that permit the GGPoker Network to operate will have access to another 54 events.

It’s not the same as a typical WSOP, but it’s something. But there’s one thing noticeably lacking from this alternative series: a Main Event.

The WSOP’s announcement of the online series, in combination with the early success of MMA and boxing in pulling off small scale events within a Las Vegas hotel-casino “bubble,” has led us to an idea that could keep the Main Event tradition alive even if a full in-person tournament remains unsafe throughout 2020.

It would be a hybrid online-live tournament, with the following basic outline:

Over the course of a few days in October, the World Series would stage two simultaneous online tournaments: one on WSOP.com for US-based players (in Nevada, New Jersey, and hopefully Pennsylvania by then), and one on GGPoker for overseas players. Just like the traditional version of the Main Event, the tournaments will have a $10,000 buy-in, no rebuys, and a slow structure. (It wouldn’t be as slow as the real Main Event because you see more hands online, but something along the lines of the same blinds, with one-hour levels instead of two-hour levels.)

Those two tournaments would each play down to a final five. The 10 surviving players, after a couple of weeks off ideally spent in quarantine, would be flown to Vegas in November for a live final table. They would be tested for COVID upon arriving and quarantined throughout play.

The final table could then play out in person, on 30-minute delay on ESPN, over the course of three nights, just as it has in recent years.

There are complications, naturally. Two in particular jump out:

We ran this idea by a pair of insiders, one a poker journalist who has covered the WSOP in person the last several years, and the other a former Main Event champion. The unfortunate truth: Both took issue with trying to pull off a Main Event in this manner.

“My first thought is I’d rather not have somebody crowned the ‘world champion’ unless the format is 100% live and in-person for the entirety of the tournament,” opined Greg “Fossilman” Raymer, the 2004 WSOP champ.

Raymer, a patent attorney before winning that $5 million top prize 16 years ago, focused a legal eye on the potential pitfalls of the proposal. His concerns range from the possibility of “ghosting” allegations during the online portion, to faulty COVID test results preventing a player from competing at the final table, to travel limitations possibly keeping multiple foreign finalists out.

“I wouldn’t want to deal with these types of possibilities,” Raymer said. “As it is, you are going to run into issues where a player entered, paid the $10K, and didn’t realize they are from a country that needs a special visa to come to the U.S., and it takes weeks or months to get one. If this event did happen, I would expect some sort of warning specific to each country, making sure those players understand what they’re getting into … It should not just be a generic warning you click-through. People don’t read those, and the negative PR could be huge.”

Robbie Strazynski, the founder of Cardplayerlifestyle.com who has covered the WSOP in person the last several summers and worked on the TV production side as well, likes elements of the pitch but has the same reservations as Raymer about crowning a “world champ” this way.

“The idea of a hybrid online/live tournament, I like that a lot,” Strazynski said, noting that the first WSOP online bracelet events, in 2015, incorporated a live final table. “I like the creativity behind this and the idea of holding simultaneous tournaments in all of the regulated markets.

“But I’m a purist. And while I think that this type of event you proposed could and ought to be for a bracelet, I do not think that it should be called the Main Event.

“Yes, the world develops and progresses, and we’re not in the ‘vote for the best player’ era anymore. I get that. But when you’re talking about someone who, de facto, is recognized as that year’s champion, I think that they need to go through that same minefield-type process that everyone has gone through, especially in the modern era.”

Without a doubt, there would be a giant asterisk attached to a tournament like this. Then again, there are going to be asterisks attached to nearly every sporting event in 2020. This is the outlier year we’re living through, and the asterisk is a sign of the coronavirus times. Assuming there’s no live WSOP in the fall, the debate is over whether it’s better to have an asterisk with “no tournament due to COVID-19” attached or one that explains why the tournament in 2020 was different than other years.

But Strazynski raises an excellent point, calling into question how worthwhile this watered-down Main Event would be for ESPN, which, aside from the finalists possibly popping up in Zoom interviews on SportsCenter during the pre-final-table quarantine, would not have had the usual opportunity to share their journeys and personalities with the viewers.

“I have the perspective of having, for the last three years, worked for the Poker PROductions company, getting player bios,” Strazynski explained. “You need to be able to craft a story and a narrative for the TV audience. Otherwise, quite frankly, you might get 10 people at a table who have online nicknames and there just hasn’t been that time to connect from the audience perspective, from the growth-of-the-game perspective. So ESPN would have to ask the question, well, why would people tune in? You’d probably only get the hardcore poker fans. You wouldn’t be able to cast as wide of a net.”

As we learned with the NBA HORSE contest, in a world without sports, ESPN is desperate to televise almost anything resembling a live competition. But by November, there’s a good chance major sports will be back and three nights of modest WSOP ratings won’t be worth as much to the network.

For what it’s worth, Raymer isn’t overly concerned about the competitive and structural issues associated with combining two tournament fields into one.

“I have no worries about the size of the respective fields,” Fossilman said. “If the five from overseas had to beat out more players, then they get to be the chip leaders at the final table.

As Raymer and Strazynski make clear, this is not a perfect proposal. But their responses also illustrate how with some fine-tuning and exchange of ideas, it can be optimized.

It’s not the WSOP Main Event that fans and players know and love, but the 2019 Main Event that Hossein Ensan won over two weeks at the Rio hardly resembled the 2003 Main Event that Chris Moneymaker won over five days at Binion’s, which in turn looked nothing like the tournaments of the 1970s.

Poker evolves and adapts. Perhaps the WSOP brass will decide that a tricky, sticky Main Event with an enormous asterisk attached — and more fine print at time of registration than usual— is better than an empty space on the roll call of world champions.