WSOP’s Bubble Bracelet Broadcast On ESPN Better Than Nothing — But, Please, Never Again

The 2020 WSOP Main Event aired Sunday night, feeling like the sterile COVID-era alternative it was 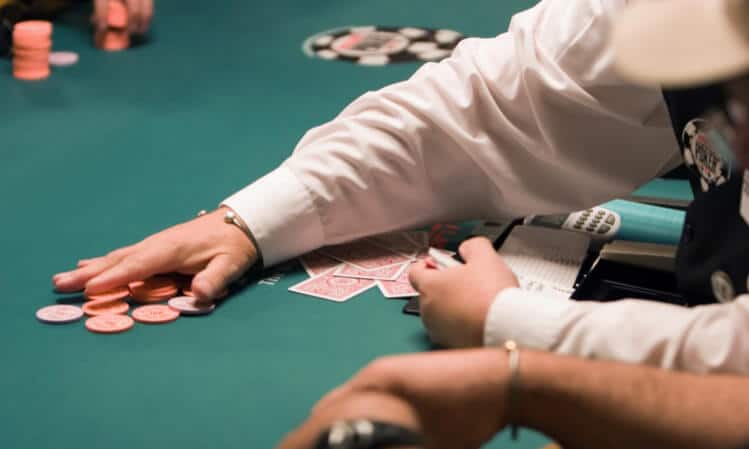 One look at the revenue reports from any state with casinos will tell you that poker is not the most popular form of gambling.

Ever since inventor Henry Orenstein conjured up the idea to put tiny cameras in the poker table to reveal players’ hole cards to audiences, extended coverage of the World Series of Poker has been an annual tradition on ESPN. That tradition has evolved, from seven carefully edited weekly one-hour episodes in 2003, to more weeks and more hours and more tournaments stretching all through the fall, to almost-live summer broadcasts that would run through the night and end after breakfast on the East Coast. But whether live(ish) or months after the fact, you could count every year on ESPN delivering that moment of the final river card being flipped and the Main Event champion being crowned.

Like many traditions, that was a hard one to keep alive in 2020.

Due to the COVID-19 pandemic, the live summer World Series was canceled. An expanded online series offered an alternative, but ESPN had no use for it. So US Bets pitched an idea in June for a hybrid online-live approach that could give the poker world a Main Event champ and ESPN something to show poker fans, and a few months later, the WSOP announced something very much along those lines.

There would be a 2020 World Series of Poker Main Event after all.

It just wouldn’t air in 2020. Instead, ESPN made plans to air two Main Events in 2021, and the first one — officially, the 2020 tournament — got beamed into homes over the course of a four-hour programming block on ESPN2 on Sunday.

See no tells, hear no fans

In short: This did not feel like the WSOP Main Event.

Players were COVID tested and quarantined. There were no family, friends, or fans in attendance — just the players, Rio/WSOP staff, and members of the production team. So not only did the atmosphere lack the rowdy reactions of the crowd that has gathered in recent years at the Penn & Teller Theater, it didn’t even have the more modest rail of vintage events at Binion’s.

The chip stacks weren’t as gargantuan as they usually are late in the Main Event. Between that and the lack of a cheering audience, the vibe was more “televised WSOP Circuit tournament” than “world championship.”

Also, about half the players wore masks. In Europe, some sort of mandate was in effect as, despite the competitors having all tested negative for the virus, added precautions were in place. Four of the players affixed masks that covered their mouth and nose, while four wore clear shields under their chin that engendered debate over their virus-fighting effectiveness.

Do these face shields they are wearing on the WSOP do anything ?

At the Rio, players were free to go mask-less and shield-less, but three of the final eight competitors — Harrison Dobin, Michael Cannon, and Ryan Hagerty — chose to mask up anyway.

Was that a safety precaution, or an attempt to gain an advantage in terms of not giving off tells? Dobin at one point pulled his mask down to speak, which is exactly when you wouldn’t want to pull your mask down if your objective was to protect your table mates against your droplets. Cannon pulled off a successful all-in bluff early on against Shawn Stroke wearing a black mask, black hoodie, and dark shades, showing almost none of his face, and set forth a very clear warning about what the future of live poker might look like even in a post-pandemic world. After all, even two or three years from now, who’s going to tell a poker player he can’t wear a mask to protect himself and others against getting sick?

Whatever the reasoning behind each player’s decision, masks make for horrible televised poker. The faces and the accompanying personalities are an essential part of the product. But mask-wearing figures to be a feature of much TV poker going forward — especially if someone can figure out how to make extra money off of it:

If the clear chinstrap devices do in fact protect against COVID, requiring those is the ideal solution, leveling the playing field while making everyone’s faces visible for TV audiences. But that seems to be a big “if.”

A break from the Norm

The one other major impact of COVID upon this broadcast was the absence of Norman Chad, who was expected to provide color analysis alongside play-by-play man Lon McEachern for the 18th consecutive year. He has been dealing with long-haul symptoms since contracting the virus, however, and was unable to be on the call this year.

While Jamie Kerstetter filled in admirably, blending poker expertise and wit along with a comfortable rapport with McEachern, Chad’s particular brand of snark and silliness was missed. Particularly in this quiet environment, his willingness to go over the top was needed. Would Norman have held back when Ron Jenkins donned a red “Make America Great Again” hat a few hands into the American final table? We’ll never know.

The poker play was perfectly entertaining, although the stacks weren’t as deep as they typically are at Main Event final tables, leaving many players with limited room to maneuver.

Still, it was easy to appreciate how brilliantly Joseph Hebert, who won the U.S. final table, was playing his big stack. At the overseas final table, based on the hands we were shown, the main thing that came across was how scorchingly hot Argentina’s Damian Salas ran. He was picking up pocket pairs in seemingly every hand at the outset, and later on, he found himself outkicked on multiple occasions, only to pair his kicker on the turn or river and win critical pots.

One notable element of the international table broadcast: While a player was pondering his decision, the space on the screen that would eventually spell out whether he checked, called, folded, or raised instead showed three blinking dots, the modern visual for “thinking” in the text message/DM era.

Heads-up play between Salas and Hebert began with 500 big blinds in both stacks, and it took about six hours of real time — and 173 hands — to crown a winner. On the one hand, hours and hours of heads-up play doesn’t make for great TV; on the other hand, with about 90% of the hands left on the cutting-room floor, it’s hard to tell the story of a back and forth battle like this, in which Salas was down as far as 9/1 in chips and was all-in for his tournament life multiple times before winning.

As the journalist who was publicly urging the World Series of Poker to take an approach like this and give the game something resembling a Main Event, I’d love to pat myself on the back and celebrate how entertaining this all was. But I can’t. It was, in a single syllable, meh.

It was better than nothing. A champ with an asterisk is preferable to no champ at all. But now that I’ve seen what a hybrid event with no spectators, with masks, and with personalities that haven’t necessarily been TV-tested looks like, it is my adamant hope that we never have to do it this way again.