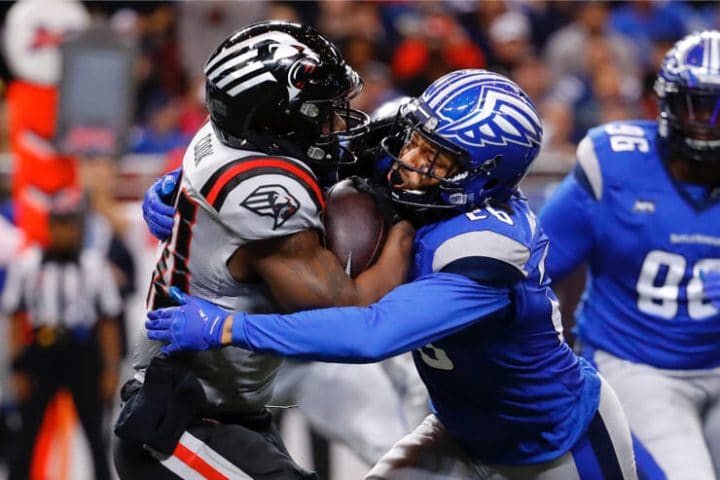 Three weeks into the league’s first season — well, actually, its second season, but its first since 17 years before the fall of PASPA — the answer seems to be yes. Since kicking off one week after the Super Bowl, the rebooted XFL has kept the tangible and virtual ticket windows busier than bookmakers anticipated, especially in comparison to its immediate predecessor, the ill-fated AAF, in presenting a pro football alternative to the NFL.

“It’s been the XFL by a landslide [over the AAF], and frankly that’s an understatement,” Matt Chaprales, head of content for online sportsbook PointsBet, which currently operates in New Jersey and Iowa, told US Bets. “We handled more money in Week 1 of the XFL season alone than we did the entire AAF campaign last year. Given the XFL’s network TV deals and overall higher profile, we anticipated there would be interest from the public, but our expectations have nonetheless been exceeded.”

FanDuel Sportsbook, currently operational in six states, shared similar findings. Not counting open parlays, FanDuel’s New Jersey bettors produced 20 times as much handle for the first XFL game as they did for the first AAF game in 2019.

Although XFL TV viewership has been declining over the first three weeks of action, XFL betting volume has mostly increased.

In Week 1 at FanDuel, handle increased 55% from the two Saturday games to the two Sunday games, and handle rose 45% in Week 2 over Week 1. FanDuel’s daily fantasy entry fees for XFL also grew from Week 1 to Week 2, by 12%.

At PointsBet, XFL turnover saw a “modest uptick” from Week 1 to Week 2, though it then declined slightly in Week 3.

On both sides of the counter, there’s been a learning curve, as the XFL features eight completely new teams for bettors and bookmakers to scout as well as several rules that distinguish the league from the NFL and slightly alter the scoring potential.

“With all of the wonky rules, and the extra-point rules in particular, some of the traditional key numbers in football have seen their significance reduced and we’ve had to adjust our linemaking as a result,” PointsBet’s Chaprales said. “For instance, through three weeks, two games have landed 12, which is the same number of games that have landed 7. You rarely see an NFL game land 12. It’s a small sample size, but it’s definitely something we’re taking into consideration in the linemaking process.”

One thing PointsBet says it has noticed is that the betting action, as compared to the NFL, skews more toward in-game rather than pregame. This is logical for a start-up league. The bettor, rather than throwing a dart before the game, can watch a few series, develop a legitimate opinion about the matchup and the game flow, and make a more educated wager a quarter or two into the contest.

Heading into Week 1, bookmakers and bettors could only guess which XFL teams would be any good, with lines seemingly dictated by which teams featured recognizable names at coach and quarterback.

Only 12 total XFL games have been played so far, and you can see from PointsBet’s championship futures odds movement from week to week how much the books have needed to adjust their initial expectations:

The team with the shortest odds now, Houston — the only undefeated team remaining — began with the third-longest odds. The current No. 2 team, St. Louis, started at No. 7. One of the preseason favorites, Tampa Bay, is winless through three games and is practically off the board at 50/1.

On the Gamble On podcast heading into the first week of games, DFS expert Adam Levitan laid it out perfectly, saying, “I don’t know where these guys came up with some of these lines. I think Tampa Bay is at best maybe the fourth-best, fifth-best, they easily could be one of the worst teams in the league, and they have like a 7½ win total I saw open up at Caesars, which is just insane. I would be absolutely shocked if any team won eight games, let alone Tampa Bay.”

Levitan singled out the Houston Roughnecks, which he got at 12/1 for the title, and the D.C. Defenders, which he bet on at 9/1, as the best value, and it sure looks like his research was sharper than that of the bookmakers.

In essence, Tampa Bay was considered a favorite simply because the Vipers’ coach, Marc Trestman, had success in the CFL. Houston was underrated because starting QB P.J. Walker (the heavy favorite now to be named league MVP) was less well known than the likes of Dallas’ Landry Jones, D.C.’s Cardale Jones, or L.A.’s Josh Johnson.

In terms of futures liability, it’s a mixed bag for PointsBet. It doesn’t seem to have gotten picked off by too many bettors with as strong a feel as Levitan, but the book does face its biggest liability with the 2-1 St. Louis Battlehawks, followed by the local team for NJ bettors, the New York Guardians, on which 20% of the outright tickets have been written.

As for how much money people are willing to risk on something as unpredictable as the XFL, Chaprales says PointsBet hasn’t taken any six-figure bets through the first three weeks, “although we have seen a handful of five-figure bets from some of our higher-volume clients.”

The top two teams in the XFL West conference, Houston (3-0) and Dallas (2-1), meet on Sunday, with the visiting Roughnecks a 1-point favorite at every book as of Wednesday. It looks on paper like a shootout, with the point total ranging from 49 to 50.5 depending on the book — about a touchdown higher than the typical XFL game.

It will be interesting to see just how low Houston’s championship odds drop if June Jones’ team moves to 4-0 with a road win over a respected opponent.

On the opposite end of the competitiveness spectrum sits Saturday’s Seattle-St. Louis game. The 1-2 Dragons come in as 12-point underdogs on the road against the 2-1 Battlehawks.

Yes, that’s right, 12 points. A funky number in the NFL. A perfectly normal number to work with in this 2020 version of the XFL.