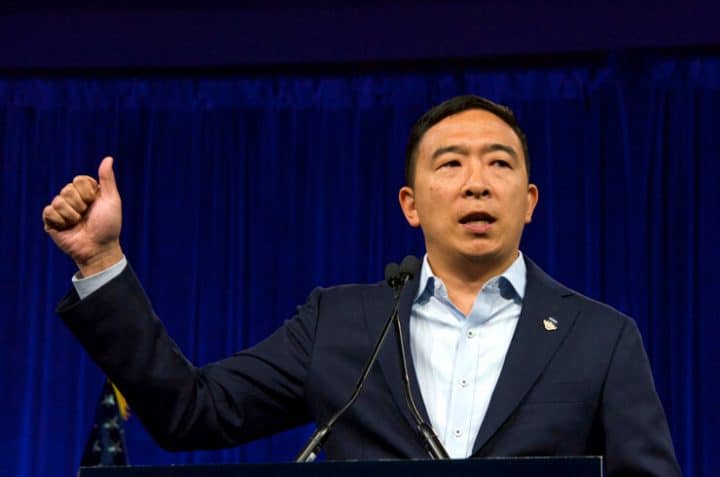 To the great majority of Democratic presidential hopeful Andrew Yang’s just-shy-of-a-million Twitter followers, it was just a random mid-afternoon Saturday tweet they might scroll past and never think about again.

But to the poker community, it was like Abe Lincoln rising from the grave to deliver the Gettysburg Address.

Online poker is legal in 4 states. The state-by-state rules are variable and push many players to offshore sites. We should clarify the rules and make it legal in all 50 states. US players and companies would benefit and new tax revenues could be used to mitigate addiction.

At the executive-branch level, online poker legalization hasn’t been a topic of meaningful discussion in quite a few election cycles. As a writer/editor who has covered the poker industry off and on since 2005, I recall there being a fair bit of speculation on the topic in 2008 because (a) the Unlawful Internet Gambling Enforcement Act was wreaking havoc on the online game, and (b) Democratic nominee Barack Obama was known to enjoy playing poker. But that year’s candidates never did delve into it — a spiraling economy and a controversial war in the Middle East took precedent — and I can’t think of an instance of regulation of online poker being discussed by would-be presidents since.

And if it had never come up in this 2020 election cycle, would you be surprised?

This is shaping up to be the most contentious and divisive clash for top office of our lifetimes. Between climate change, election security, healthcare reform, immigration, a ballooning deficit, and corporate influence — not to mention, uh, an ongoing impeachment inquiry centered around foreign interference solicitation for this upcoming election — there are quite a few issues more important to most Americans than playing cards on the computer.

But Yang took the time to add nationwide online poker legalization to his platform. And even if the upstart candidate finds himself felted in the presidential race within the next few months, he will have done something beneficial for the poker industry.

Yang, a 44-year-old entrepreneur and attorney with limited formal political experience, has gradually succeeded since entering the race way back in November 2017 in being taken more seriously as a candidate, but he nonetheless remains a long shot some eight months out from the Democratic National Convention.

Prior to the poker tweet, a Quinnipiac poll on Oct. 24 had Yang running at 1% and a CNN poll on Oct. 23 had him at 2%. A Politico poll released on Oct. 29 sees Yang at 3% — which poker players might like to view as proof of a poker-tweet bump.

But no matter which poll you look at, Yang is, at best, running in sixth place behind Joe Biden, Elizabeth Warren, Bernie Sanders, Pete Buttigieg, and Kamala Harris.

Does that mean he can’t possibly gain the nomination?

Poker Hall of Famer Daniel Negreanu, an outspoken Yang supporter who says the Yang campaign reached out to him about a week before Saturday’s tweet, said this week on DAT Poker Podcast, “As much as people are saying Yang doesn’t have a chance, they said the same about [Donald] Trump, they said the same about Barack Hussein Obama, so it’s not too late. And his growth, especially in under-35s, is growing at an exponential rate.”

Given that the Democratic primaries haven’t even started yet, Negreanu is probably correct that it’s too soon to count Yang out completely. But if we’re being realistic, Yang’s numbers are a problem. At this point in their respective campaigns heading into 2016 and 2008, Trump was leading the Republican polls and Obama was a close second in the Democratic race.

It starts with a spark

So let’s just say, for the sake of argument and to the disappointment of “Kid Poker,” that Yang is not going to win the nomination.

Would that render to his endorsement of online poker legalization meaningless?

While even Negreanu concedes, “If you’re going to be a one-issue voter … online poker shouldn’t be at the top of your list,” the fact is that Yang’s tweet has sparked awareness and will get this issue at least somewhere on thousands of voters’ lists.

Yang has galvanized a poker community that had given up on online poker legalization being addressed. Look at the replies to his tweet — from big-name pros to everyday grinders, Yang lit a fire. Many, like recent Gamble On podcast guest Joey Ingram, want to see Yang pour more gasoline on that fire.

I invite you on my show to expand on your tweet related to the online poker in the US. The situation for American players is in need of help. Players are being taken advantage of w/ few safeguards in place.

Please RT for awareness! Thank you for caring. pic.twitter.com/CLylQP81VI

It should be noted that, as a younger candidate with a tech background, Yang’s online presence probably exceeds his popularity with the general population. The power of his tweet about online poker regulation isn’t exactly rippling through the town halls in Idaho.

But if and when Yang drops out of the race, perhaps a higher-profile candidate can carry this torch.

Sanders, for example, is generally in favor of regulating and taxing activities he feels Americans should have the freedom to engage in. With about 10 times as many Twitter followers as Yang and, accordingly, about 10 times the polling strength, maybe the Vermont senator could be the next to pivot momentarily from the life-or-death issues and express a position on online poker legalization.

Or maybe Warren, who always “has a plan for that,” can sign onto Yang’s poker platform the same way she did former candidate Jay Inslee’s proposal to combat climate change.

National legalization of online poker is a complex issue. Each state currently has the right to pass its own regulations on this front, but in the past eight years, only four have — and their ability to pool players across multiple states is extremely limited. For most American poker players, the current setup isn’t working.

Andrew Yang’s tweet won’t directly impact the state of online poker. Yang is not a likely nominee, online poker is not a top issue, and even if January 2021 sees us swear in a President Yang who is making online poker legalization a priority, he won’t have the unfettered power to do it all himself.

But indirectly, his tweet matters. It’s reigniting a conversation among poker players and informing those outside the poker bubble that this topic exists. Awareness of online poker is good for live poker, for online sports betting, for casino expansion, and so on.

Yang’s tweet could prove to be the start of something. And if the state of regulated online poker throughout this decade has shown us anything, it’s that this industry isn’t going to thrive again until someone comes along and shakes up the status quo.